Key climate messages from a day at the UN General Assembly 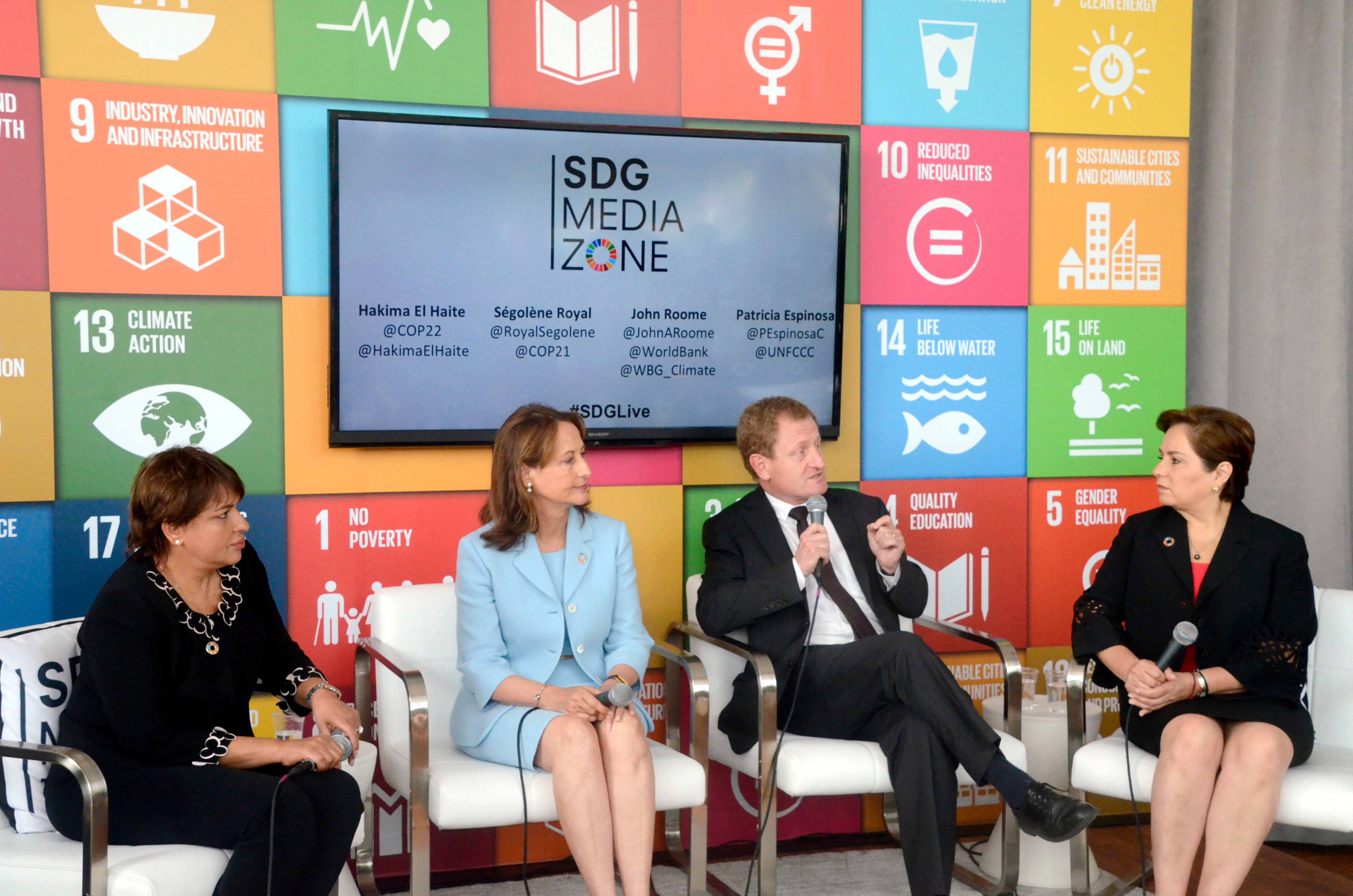 September 21 was a great day for advancing climate action at the United Nations.  The day kicked off with the High-level Event on the Entry into Force of the Paris Agreement, hosted by Secretary-General Ban Ki-moon in the General Assembly. Ban Ki-moon declared that more than 55 countries had formally joined the Paris Agreement on climate change signed by world leaders this past April, thus officially crossing one of the two thresholds required to bring into force the landmark pact that seeks to put the world on a path towards low-carbon growth and a more sustainable future.

Climate Action in the Media Zone

Following this, influential climate leaders gathered in the SDG Media Zone for a discussion on “From Paris to Marrakesh: Progress on climate change - #ParisAgreement.” Facilitated by Dan Thomas, Communications Director, and Spokesperson, Office of the President of the 71st Session of the United Nations General Assembly, the discussion showed bold support for climate action.

Patricia Espinosa, Executive Secretary of the UNFCCC, highlighted that the Paris Agreement was “the first time that we can see such a collective response by the international community.” In turn, Hakima El Haite, Delegate Minister in Charge of Environment, Morocco, and COP22 Host, emphasized the intimate link between taking climate action and the Sustainable Development Goals. “Come to Marrakech with answers to people that are already suffering from the impacts of climate change,” El Haite said.


The President of COP21 and French Minister of Ecology, Sustainable Development and Energy, Ségolène Royal, praised the involvement of the private sector and non-state actors in COP21 and emphasized the need for a price on carbon. She noted that “green finance is crucial for the climate solution” and that “it is more expensive to do nothing.”

John Roome, Senior Director for Climate Change at the World Bank Group, highlighted that the next 15 years would see more investments than in all of history and the crucial question is: “How do you shape those investments so that they are low-carbon and resilient to climate change?” He also emphasized that we cannot afford to leave anybody behind, citing the World Bank’s research that shows that more than 100 million people could return to poverty if we do not take action on climate action. ​

We cannot meet the #SDGs or end poverty without addressing #climatechange - they are absolutely linked. #UNGA #SDGLive pic.twitter.com/VQbYoLs9CU


From This to Future Generations

The SDG Media Zone was alive with climate discussions. The Connect4Climate program of the World Bank Group teamed up with Alliance for Climate Educators to have youth representation in the SDG Media Zone. Hakim Evans (17) and Zora Hall (16) interviewed influential climate leaders and representatives from the private sector, emphasizing that tackling climate change should be this generation’s greatest concern.


On stage, Roberto Borrero, UN Representative to the International Indian Treaty Council, spoke to the plight of indigenous communities and how they are already at the front line of climate impacts. Meanwhile, Mark Wilson, CEO of Aviva, called for competition for climate action, saying, “we need to make sustainability a competitive sport.”

President and CEO of the UN Foundation, Kathy Calvin, expressed her excitement for the private sector involvement in finding climate solutions and noted, “we need to keep ratcheting up ambition on climate action and show personal climate solutions.” I had the pleasure of moderating a discussion on Sustainable Innovation and Solving Hunger, noting the powerful solutions provided by social enterprises, as exemplified by Lucky Iron Fish, and how these should be applied to climate and development challenges.

Max Schorr, Co-Founder of GOOD, and Aaron Sherinian, Chief Marketing Officer at the United Nations Foundation, announced the Earth To Marrakech movement, joined by Connect4Climate and other partners, to raise the volume and profile of the discussion around climate action. Schorr expressed that “we cannot get complacent on climate action!”

Innovating to Meet the Climate Challenge

Further uptown in New York the World Bank teamed up with Responding to Climate Change to discuss how the world can direct action and investments on an unprecedented scale to deliver on the Paris Agreement.

Jim Kim, President of the World Bank Group, emphasized this during the opening of the Innovating to Meet the Climate Challenge event: “Tackling climate change will require innovation at levels we’ve never seen before.” He highlighted that the investment needs to be embedded in the countries’ climate change plans amount to more than $1 trillion a year over the next 15 years.

#CarbonPricing can accelerate innovation, and is a part of future proofing business. #Innovate4Climate #CWNYC @DSM pic.twitter.com/YQ8pZQwSBh

The day ended with the spectacular global premiere of the star-studded second season of the Years of Living Dangerously. Arnold Schwarzenegger spoke to the issues brought forward in the television series and emphasized that climate change should be seen as a challenge of today and not of tomorrow.


The Emmy-winning climate change series returns to tell the biggest story of our time. Featuring some of Hollywood’s most influential stars, the series reveals emotional and hard-hitting accounts of the effects of climate change from across the planet.

Model and Goodwill Ambassador to UNEP, Giselle Bündchen’s tears when confronted by the devastating reality of Amazonian deforestation left me emotional, while David Letterman’s investigation into the light of India’s solar developments left me inspired.

We are certainly on the cusp of a global transition to a low-carbon resilient future. We need to act now, and act fast, to implement the necessary climate solutions.
Topics
Climate Change
Countries
Morocco
United States
Regions
The World Region
Series
Sustainable Development Goals (SDG)