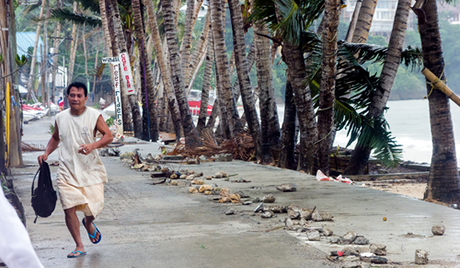 Average economic losses from natural disasters are rising, despite considerable efforts to better manage risk from natural hazards over the last few decades. Data from Munich Re shows a sharp rise, from $50 billion a year in the 1980s to just under $200 billion annually in the last decade. Population growth, rapid urbanization, and climate change are compounding these losses. Securing prosperity in the midst of growing hazards is an enormous challenge that demands a new approach to development.

The international community is rising to meet this challenge head-on. Last week in Oslo, Norway, I had the privilege of participating in the 15th Consultative Group Meeting for the Global Facility for Disaster Reduction and Recovery (GFDRR), where 75 representatives from partner countries and international development organizations met to help scale up and better mainstream efforts to build climate and disaster resilience in some of the most vulnerable communities around the globe.

With the importance of this effort in mind, I co-authored an article with Norwegian Minister of Foreign Affairs Børge Brende, in which the minister and I argue that sustainable development gains require a new approach towards mitigating risk from climate change and natural hazards. After the recent days spent with my colleagues in Norway, I’m encouraged by the shared enthusiasm of GFDRR and its partners for the task ahead. It’s time to get to work.


Following is an English translation of the Norwegian article 'Forgjeves utviklingsinnsats?' originally published in the Vårt Land newspaper on May 15, 2014.

In the last few decades, the eyes of the international development community have been turning towards the growing risks from natural hazards. A convergence of population growth, rapid urbanization, and a changing climate is compounding impacts from natural disasters in some of the most vulnerable communities around the globe.

A recent World Bank report finds that over the last 30 years natural disasters accounted for close to $4 trillion in economic losses, owing mostly to extreme weather events. Losses rose from an annual average of about US$50 billion in the 1980s to close to US$200 billion over the last decade.

Climate change will exacerbate these trends. We know that by 2050 global economic costs from flooding in cities alone could rise to US$1 trillion a year, with developing countries bearing the brunt of these costs.

The recently released Fifth Assessment Report from the Intergovernmental Panel on Climate Change (IPCC) states that each of the last three decades has been successively warmer at the Earth’s surface than any preceding decade since 1850. The Report also warns that changes in the global water cycle in response to the warming over the 21st century will not be uniform, with contrasts in precipitation between wet and dry regions and between wet and dry seasons increasing—meaning higher incidences of climate-related natural hazards such as storms, droughts, and flooding.

Impacts like these have the potential to roll back years of development for countries, so it is all the more important to help them better manage and prepare for disasters.

In the Philippines, for example, the government has made strong efforts to improve resilience and emergency preparedness, and its experience with post disaster assessments is helping Haiyan recovery efforts. In Odisha, India, in 1999 a category 5 cyclone devastated the coastline, killing more than 10,000 people and causing massive destruction to housing and infrastructure. When cyclone Phailin, another Category 5 storm, struck the same area last year, less than 40 people lost their lives. The striking difference in the two events is a result of the Indian government’s strong preparedness measures with support from its partners—among them the World Bank and the Global Facility for Disaster Reduction and Recovery(GFDRR)—that established Odisha's early warning system and network of cyclone shelters.

Clearly, climate and disaster-resilient development can save lives and prevent human suffering. This is a priority for Norway and the World Bank, who are working together through GFDRR to ensure developing countries can access the tools and knowledge needed to better manage risks and avoid disasters. Norway is presently co-chairing the GFDRR’s Consultative Group, guiding its disaster risk management and resilient recovery initiatives.

Decision-makers today have a growing menu of options for managing disaster risks: from risk assessments, risk-informed land use and urban planning, smart infrastructure, early warning systems, and insurance. The recent World Bank-GFDRR publication Weather and Climate Resilience shows that improvements in national meteorological and hydrological services which provide early warnings for extreme weather events could save an average of 23,000 lives a year, prevent displacement of populations, and provide up to US$30 billion annually in economic benefits.

The next few decades will see billions of dollars in infrastructure investments in rapidly growing cities in the developing world. The quality of infrastructure and systems planned today will determine the resilience of these cities and their citizens tomorrow. Rather than being seen as short-term expenses on annual budgets, disaster risk reduction should be recognized as a long-term investment that will save lives and prevent years of economic progress from being washed away.

The bottom line is that we can—and must—invest in managing and reducing disaster risks if we are to protect our communities and hard-won prosperity gains. Investing now to build up countries’ capacity to manage risks can also lead to considerable future savings that can be channeled into other development efforts. Only then will we reverse the rising losses from disasters and secure a safer, more resilient future.