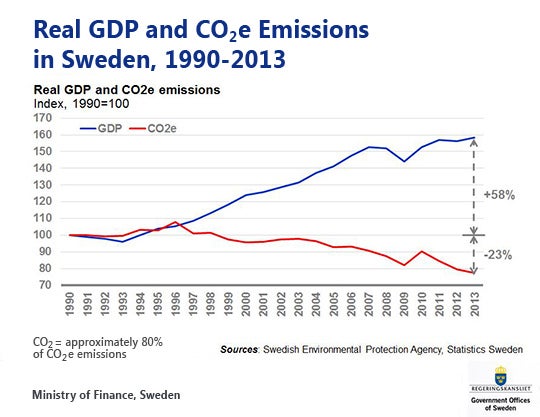 Sweden is proud to join forces with Sustainable Energy for All (SE4All), convening in New York this week. Energy is one of the most decisive issues of our age. Without secure access to energy, we won’t achieve real and lasting poverty reduction. Without the expansion of clean energy, we won’t be able to stop climate change.

With business as usual and no significant carbon emission cuts, we have only 15 years left before we have emitted enough CO2 to make this planet more than 2 degrees warmer. Then we will see a dramatic increase in droughts, floods, storms and species extinction – and we will have changed the conditions for every generation to come. And we know that it is the poorest who will be hit the hardest by the effects of climate change.

This is not a political statement but a scientific one. Fifteen years left.

So we must start changing our energy systems, going from fossil to renewable, now.

The falling price of renewable energy is a much welcomed factor in solving the equation of providing energy to 1.3 billion people and doing so in a sustainable manner. However, with fossil fuel consumption subsidies worldwide reaching nearly $550 billion in 2013 – most of which do not actually reach the poor – more needs to be done in order to level the playing field for renewable energy and lead investments in a sustainable direction.

Another measure with a strong foundation in economic theory is putting a price on carbon. In Sweden, pricing carbon through CO2 taxation has been the main policy instrument to drive fossil fuel consumption down – and it has done so significantly over the last 20 years.

The CO2 tax in Sweden was first introduced in 1991 alongside already existing energy taxes and has gradually been significantly increased, from 29€ in 1991 to 125€ in 2014 for households and services. The tax is coordinated with the EU Emissions Trading Scheme (EU ETS), which was adopted in 2005. Industrial installations covered by the EU ETS are not subject to the CO2 tax.

To avoid carbon leakage in sectors subject to international competition, the Swedish CO2 tax has two tax levels for heating fuels, with a lower level for industry and agriculture and a higher level for households and services. With the gradual increase of the tax, the gap between the higher and the lower tax levels has also been decreasing. The Swedish Government is considering continuing the phasing out of the lower tax rate in the near future. The CO2 tax’s effect on fossil fuel consumption has been especially noteworthy in terms of district heating – which faces the full CO2 tax – where the use of biomass in-put has increased from 25% in 1990 to nearly 70% in 2012.

With the highest level of CO2 tax worldwide, Sweden provides strong evidence that decoupling GDP growth from CO2 emissions is possible and that CO2 tax is an efficient way of achieving a decrease in CO2 emission with fossil origin.

Noteworthy is also that this decoupling has been absolute, i.e. the emissions have decreased in absolute terms at the same time as GDP has increased. (A more common pattern is otherwise relative decoupling, meaning that emissions increase at a slower pace than GDP.) Moreover, a CO2 tax is relatively easy to administer and the tax revenues can be used where they are judged to contribute best to the overall goals for the society. It is, however, important that developing countries wishing to explore this possibility are assisted with capacity building, as needed.

The momentum for carbon pricing is growing.

This is something that the World Bank Group has helped to push forward, and we were happy to join forces with the Bank and other interested countries and stakeholders at the Spring Meetings in April. Together with World Bank Group Vice President and Special Envoy for Climate Change Rachel Kyte, we brought together governments, private sector and civil society in a roundtable discussion on how to use carbon pricing to combat climate change.

We look forward to continuing this discussion through the Carbon Pricing Leadership Coalition, which Sweden is a proud partner of. The Sustainable Energy for All meeting in New York this week is the next step forward.

2015 is the year of thinking and planning for a green, sustainable future. We are in the midst of a number of important processes this year. The Financing for Development conference in Addis Ababa in July, the United Nations Summit to adopt the post-2015 development agenda in New York in September, and the 21st session of the Conference of the Parties to the UNFCCC (COP 21) in Paris in December will determine the level of success in halting the most damaging and urgent effects of climate change.

2015 is the year of opportunities to build the world we want. Hello
I am unclear about the Swedish carbon tax I read an article that says one industry pays only 21 % of the tax; another points to a 50% reduction in other taxes and you point out the tax is 125 euros for households and services....what exactly does this mean? what is the tax base? are their refunds? In short, what is the real, effective tax on carbon?
thank you
D. Auld, Professor
University of Guelph

Dear Douglas,
The 21 % figure is an old one, the rate for industry outside the EU Emissions Trading Scheme has been increased in a step-by-step manner. It is currently 80 % of the general level and and will be totally aligned with that of households and service sector companies on 1 January 2018. Drop me an e-mail and I will be happy to give you more information when I am back from vacation in mid August.
Susanne Åkerfeldt, Senior Adviser, Swedish Ministry of Finance (susanne.akerfeldt [at] gov.se)

The impressive decoupling pictured in the graph is built on a logic which says that Sweden is only accountable for emissions in Sweden (production logic), not for emissions caused outside its borders by demand in Sweden (consumption logic).
If the calculations is repeated with a consumption logic (Sweden's emissions plus emissions caused by Swedish imports minus emissions accounted for by Swedish exports) the conclusion will be completely reversed. In other words, the image presented by the Swedish government results from the fact that Sweden has exported its emissions, a case of environmental load displacement.
Kenneth Hermele, School of Global Studies, Gothenburg University.