A tale of three men and 40 cities

Driving through Sao Paulo yesterday, I was struck by the power of cities. While cities are part of the climate change problem, they need to be part of the solution too. They are bigger and more energized than any individual or organization. Cities push and cajole; and cities act. Cities are where it all comes together. 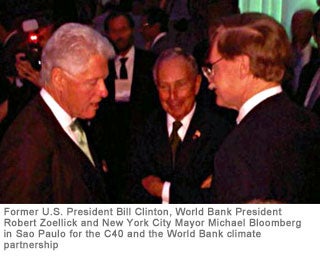 Even more so when former President Bill Clinton, World Bank President Robert Zoellick, and New York City Mayor Michael Bloomberg joined forces in Sao Paulo. The accomplished gentlemen born less than a dozen years and 1,500 miles apart spoke and fielded questions with a worldly and gracious informality. The pleasant exchanges sat in contrast to the underlying gravity of their mission. Together they have determined to access their considerable resources to tackle one of the biggest challenges they’ve ever faced: climate change.

The location for the partnership launch is telling. With Mayor Kassab of Sao Paulo hosting this week’s C40 Large Cities Summit everyone reinforced the need for cities to be in this fight. C40 is a group of mayors of major cities of the world responsible for 12% of global emissions. It is not hard to imagine that the battle for sustainable development will be won or lost in our cities.

On behalf of the World Bank, President Zoellick and Mayor Bloomberg, representing the world’s most influential cities as Chair of C40, signed a Partnership MOU outlining how the two organizations will work more closely together and provide focused support to cities. The MOU outlines common tools and metrics, city- tailored finance, and enhanced city-to-city learning.

As cities respond to the call to fight climate change, new partnerships and new ways of doing things are emerging. The C40 and Clinton Climate Initiative recently announced their merger. International council for Local Environmental Initiatives (ICLEI) and C40 also signed an MOU yesterday to urge and help their member cities to use a common standard for city-based Green House Gas (GHG) monitoring.

An important message from the Mayors’ Task Force on Climate Change, Disaster Risk and Urban Poverty released at the Summit this week also echoed the need for partnerships. City administrations most certainly need to partner with local communities to enhance city resilience.

Partnering is hard; it takes energy, trust, and patience. We have to learn how to share, which is not always easy, and almost every partnership seems to have a deficit of credit and a surplus of work. And yet lots of new partnerships are emerging.

As humanity faces the challenge of climate change and an unsustainable lifestyle, cities are forcing more partnerships. Cities are redefining how people like Mayor Bloomberg and Bill Clinton and organizations like the World Bank and C40 will work together. The merger of CCI-C40 and the C40-WB MOU are a measure of their commitment.

For the average citizen in a C40 city, tomorrow will dawn much the same as today; crowded, polluted, and threatened by CC, especially the poor. The partnership recognizes this. No grand changes are promised. What is promised is that a greater effort will be made by the agencies to work together, to have their activities better measured and managed. City residents will always be the best judge of this impact.

Probably the most encouraging aspect of the event was that when the three stalwarts got up in front of all those mayors and city-people, their common theme was ‘if you can’t measure it, you can’t manage it’. “We’ve got to keep score,” argued Bill Clinton. Everyone agreed; we are all now in the game.

Dan, a great summary of this event.

I greatly enjoyed your blog on the C40 meeting in Sao Paulo. The common theme ‘if you can’t measure it, you can’t manage it’ is fantastic.

You mentioned that there has been some progress in having cities better measure their activities. Is there a common framework/tool for uniform measurement?

I would appreciate your advice!

Hi Dan -- Good article -- you are quite a good writer! Good journalistic style... you can really avoid the jargon when need be... something we can all appreciate. Best, Bob