What a waste in a changing climate 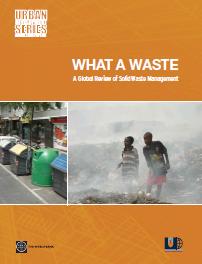 Let’s talk trash, just for a few minutes. In the time it takes you to read this pithy blog, more than 14,000 tonnes of waste will be generated: that’s enough to fill the Pentagon in less than a day. More than 1.5 billion tonnes of trash will be generated this year alone. And if you’re inclined to read this blog again in 2025, the amount will have increased to 23,000 tonnes. The annual trash generated at that time will be more than 2.2 billion tonnes a year. That’s enough garbage to fill the Roman Coliseum 730 times, or a line of garbage trucks 900,000 km long, 23 times around the world. Last week’s release of What a Waste: A Global Review of Solid Waste Management summarizes the issue.

Our cities generate enormous amounts of waste, and they’re just getting started – volumes will likely to increase beyond 2100, and we should plan for about a peak volume, four times what we have today. In today’s dollars, annual waste management costs will eventually exceed $1 trillion, and this cost is almost entirely borne by cities (this amount, for example, eclipses any sort of financial contributions to deal with climate change now being discussed within UNFCCC negotiations). Clearly we have a problem. But why is this particularly relevant to the climate change community?

Solid waste has several obvious links to climate change. On the mitigation front, municipal solid waste is particularly important, as it’s the one of largest sources of methane emissions. Methane is a powerful GHG as its impact is much more pronounced in the short term than carbon. On the adaptation front, especially in low-income cities, which are most threatened by a changing climate, uncollected solid waste significantly increases local flooding by clogging drains.

There’s a less obvious, but probably even more important link between our solid waste and climate change challenges. Both solid waste and GHG emissions are waste, born out of inefficiencies of urbanization and the economies our cities drive. Cities are complex systems: materials go in –  people scramble around, generate ideas and money – products and waste go out.

With the challenges we now face with climate change and solid waste, we are getting our first glimpse of the global system of cities. We have what some people call a ‘wicked problem’, which basically means that if you solve one part, you’re likely to have another problem pop up somewhere else. For example, when landfills are hard to develop, cities might choose incineration. Air pollution, like dioxins and CO2, follows. In waste management there is no `going away’. And what’s really scary is that we are only just half way through this urbanization process.

One way out of this `wicked problem’ is by greening our economies. This requires generating economic growth with a lot less waste and much less reliance on stuff going in. For example, today, the fastest way to reduce solid waste volumes is to have a recession – not an attractive option for local politicians and ministers of finance. We need to figure out how to reduce waste volumes while keeping ministers of finance, and the rest of us, happy. This is a very tall order but doable (see ‘Inclusive Green Growth'). We will not solve the climate change challenge without simultaneously solving other big problems like the waste management challenge. This is where cities come in.

The C-40 big cities club, with the Carbon Disclosure Program, did a survey of their member cities last year, asking what cities number one issue was. Solid waste was the clear priority. If we want to mobilize the world’s most powerful stakeholder in the climate change response (i.e. cities) we will need to ensure that better solid waste management is a big part of any solution.

The next time you put your weekly 20 kilograms (about 45 pounds!) of waste out for collection (don’t forget how much you generate at work and outside the house) take a minute to think about the global impacts like methane and resource consumption, and then act locally to reduce and recycle what you can. When facing a challenge as big as solid waste or climate change, we really are all in this together. This is obviously a very serious problem. However, I don't see many solutions coming out of developed countries such as the US - even the most progressive European countries still have a major waste problem. People in many developed countries seem to feel proud when they manage to recycle perhaps 10-20% of their cumulative waste, with the likelihood that the total volume of waste generated is still going up. If the rich economies are unable to show a viable pathway to the kind of green economy you highlight then how do you expect developing countries to manage it? For me this underlines the hypocrisy of green growth - nobody has yet shown it to be possible. And while cities are undoubtedly at the forefront, a real solution will be heavily reliant on national policies on a whole range of issues that go to the heart of our economic system - not just mandating more recycling!

Your report is fantastic and should be an eye opener to everyone. People are constantly talking about Peak Oil.

What about Peak Trash? When is "enough is enough."

Our company is in discussion with 2 Indian companies for providing Containerized Plasma Systems for for treating both wastewater and solid waste together.

Our biggest concern is financing the Individual Modular PlasmaWhirl Systems. Each system will handle a population of about 18,000 people. We also developed and are in the commercialization of a much smaller system for universities and home owners.

In lieu of putting trash on the street you simply place the trash in our Hydro2Home System for generating hot water + hydrogen.

Hopefully we can get the right people involved for India. I am drafting a Presentation "Into the Dark" with respect to the 1.2 billion people that do not have access to electricity and clean safe drinking water.