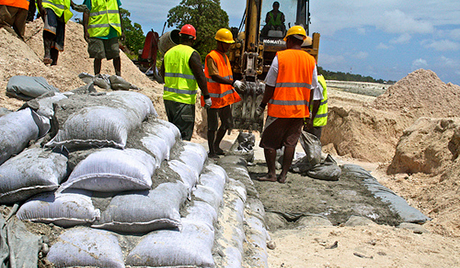 Late last month, I retired after spending more than 30 years in the climate arena, the last decade as a principal climate change specialist at the International Finance Corporation.

During the span of my career, climate change has moved from the sidelines to be recognized as a serious development challenge. And while we’re still far from achieving the international commitments needed to avoid potentially dangerous and even catastrophic climate events, much has been accomplished.

Scientists have reached near-consensus about climate change and its impacts. We’ve also seen the creation of several significant donor-supported climate funds, as well as a steady increase in policy and financial support for climate-friendly technologies.

In one critical respect, however, we need more progress: making the private sector a partner in helping nations build resilience and adapt to climate change.

The business community needs to be our partner as we build resilience against and adapt to climate change. Yet to date, adaptation discussions inside and outside official climate negotiations have had surprisingly little business engagement.

The focus thus far has been almost entirely on what governments need to do, and who should pay. In some quarters, business interest has even been viewed as inappropriate competition for scarce resources.

This is changing in a few countries, but not yet in developing nations where the biggest needs exist. Adaptation planning and investments must include the private sector – and the sooner this happens, the better.

Engaging the private sector is essential for multiple reasons. It can mobilize financial resources and technical capabilities, leverage the efforts of governments, engage civil society and community efforts, and develop innovative climate services and adaptation technologies.

Private entities dominate many investments that are critical to adaptation, such as the location and design of buildings and other infrastructure investments.

Private-sector corporations also develop – and often dominate – the design and delivery of many adaptation services such as weather observation technology and early warning systems. Drought-resistant seeds and other agricultural products, along with water management infrastructure and technologies, also tend to fall within their purview.

Although insurance tends to be much less available and relevant to investment in developing nations, there are already significant examples of “Cat” bonds and other products that spread the risk and speed the recovery of countries after natural disasters.

As the largest victims of natural disasters, corporations are also in a position to spread climate awareness and rally political support for climate action. Finally, and in some ways most important, the private sector must take on a bigger, if not the dominant, financing role for climate adaptation in all but the poorest countries if we are to prepare sufficiently for the challenges that lie ahead.

So what do we mean by partnering with the private sector in adaptation projects? In a recent article I co-authored with Bonizella Biagini, the Global Environment Facility’s adaptation manager, we review the concept and provide some highlights:

Low-cost weather observation systems placed on cell phone towers, for example, are a fraction of what radar systems cost and often work as well or better in many locations. Companies that offer farmers highly targeted weather and soil information, meanwhile, can help improve yields and reduce vulnerability to climate change.

Of course, governments play a key role to make businesses more aware of climate risks and boost private sector engagement through partnerships. The IFC and the European Bank for Reconstruction and Development have been working with the government of Turkey and its business associations to do just that.

A recent ambitious effort along these lines is also taking place in New York City, where city officials are inviting insurance companies to discuss coastal protection investments. City officials recognize that since insurers will be among the major beneficiaries, they may be asked to share the costs of the major improvements required.

Efforts to engage the private sector in adaptation to climate change are beginning and must be accelerated. Public policy should provide appropriate incentives for adaptation measures and, where necessary, regulation to avoid shifting risks to the public.

The financial community can help by recognizing the relevance of climate risk as a factor when it evaluates the expected future performance of companies, for example by offering climate leaders a financial premium.

These are all common-sense steps we must take with our private-sector partners as we prepare the world for the future. A Vote for Expanding Stakeholder Engagement to Include More People
I read the following, and thought that I might contribute something to this discussion:
“The focus thus far has been almost entirely on what governments need to do, and who should pay. In some quarters, business interest has even been viewed as inappropriate competition for scarce resources.”
“Engaging the private sector is essential for multiple reasons. It can mobilize financial resources and technical capabilities, leverage the efforts of governments, engage civil society and community efforts, and develop innovative climate services and adaptation technologies.”
My comments:
In many articles about mitigation of global warming, and in many approaches to accelerate responses to global warming, there is a tendency to look in the direction of government—or, as in this article, the private sector. And yet…every person—in communities around the world—is a stakeholder in the responses, and outcomes to global warming (and to many other challenges), and every person—in communities around the world—can make improvements to how wisely they “invest” their time, energy, and money.
What we could have—and what we truly need at this critical time—are collaborative problem solving processes which help citizens understand that the investments of time, energy, and money (the “votes”) each of us make in our everyday circumstances become the larger economy. And that wisely directed, such “votes” can result in countless ways of earning a living which contribute to the peacebuilding, community revitalization, and ecological sustainability efforts necessary to overcome the challenges of our times. Citizens from every variety of circumstances can learn how to wisely cast such “votes”—through workshops and meetings at Neighborhood Learning Centers during a stakeholder engagement process like a Community Visioning Initiative (and through local learning networks, for people who have difficulties attending meetings).
There are many critical challenges converging now [see this writers’ “A List of Ten Critical Challenges” (1 page)]. One way of exponentially accelerating solution-oriented activity at the local community level is for stakeholder engagement processes to engage more of the people who are stakeholders—that is, to maximize citizen participation. Many more people can understand that they have a civic responsibility to wisely direct their “votes” of time, energy, and money. This writer has proposed a Tipping Point Action Campaign which would encourage and support implementing 1000 Community Visioning Initiatives, in communities around the world. The discussion can, and should be, more and more about what we—collectively—need to do.

This is a very informative write up. I strongly agree that the private sector hold the key to a successful climate action. While all individuals have a role to play, no doubt the burden whether locally, nationally and internationally will be "common but differentiated responsibility and respective capabilities". Locally, Governments are an inextricable part of the response equation because they have to provide a transparent framework and platform for local actions. But for the private sector, internalizing the cost of action will be a major mechanism for a successful climate action.

I agree totally with your position that the Organised Private Sector holds both the handle and key to climate action, but I have always asked this question. How do we get them to properly understand this in Nigeria?

Agree. The role of private Sector is crucial in climate action.