When the consequences of conflicts last generations: Intergenerational mobility in Iraq and Vietnam

The immediate effects of conflict are starkly clear. They include deaths and injuries, population displacement, the destruction of assets, and the disruption of social and economic systems. But one day the fighting stops, and life in conflict-affected areas gradually returns to normal. Or does it? How long do the economic and welfare effects of armed conflict typically persist? In particular, how long will these effects constrain growth and limit countries’ ability to reduce poverty?

The report “Fragility and Conflict: On the Front Lines of the Fight against Poverty” summarizes current evidence on the long-term welfare impacts of conflict and fragility. The report reveals that conflict and fragility can have substantial negative impacts that extend across decades and even generations. After the guns fall silent, conflict leaves a legacy of damaged human capital that will lower productivity, weaken growth, and slow poverty reduction far into the future.

In Iraq, absolute mobility was on an upward trend for more than two decades before the war with Iran. Among individuals born in 1940, only 25%surpassed the educational attainment of both their parents. However, by 1968, the last cohort to reach the age of 12 and complete primary school before the conflict with Iran, more than 60% surpassed the educational attainment of both their parents. In the following decades, likely due to the multiple wars in which Iraq was involved, this rate declined back to around 35%. Likewise, relative mobility was high before the wars started, but as soon as they did, it decreased rapidly, from around 0.7 in 1968 to 0.5 in 1990. This suggests that the wars reinforced social class divisions and made it harder for the poorest to climb the ladder in society. 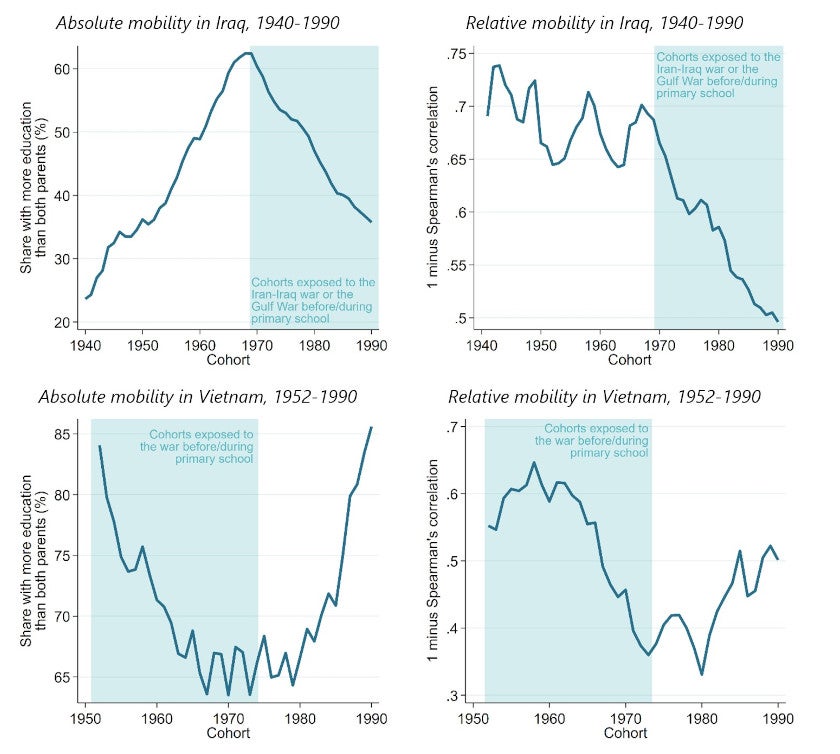 Vietnam presents a similar picture. Before the war began to claim large death tolls in the 1960s, children had very high probabilities of surpassing their parents in education, upwards of 80%. For the decades that followed, this number fell to 65%. After the war ended, Vietnam managed to raise this number back up to 85% for the cohort born in 1990. Likewise, relative mobility decreased over the duration of the war, from about 0.6 to 0.35. After the war ended, it rose back to 0.5.

Both of these case studies point to conflict and violence exerting large, lasting impacts on individuals’ ability to face equal chances in life and to surpass their parents’ social and economic outcomes . Though the direct consequences of conflict alone are sufficient reason to make this an area of priority, the indirect long-term consequences make this case even stronger.