In 38 countries, women can still be fired for being pregnant

On the eve of the International day of Families, we are shining a light on the lack of responsive, family-oriented policies that prevent women from entering the workforce and thriving in their careers. The case of a volleyball player fired over her pregnancy in early 2021 sparked outrage in the world of Italian sport and beyond. After announcing that she was pregnant, her volleyball club not only rescinded her contract but also took her to court, claiming an apparent breach of contract. The facts, ironically revealed on International Women’s Day, shone a spotlight on the persistence of a practice unfortunately still quite common and the need to continue fighting for gender equality. Discrimination and unlawful termination of pregnant workers remain pervasive practices around the world, as reported in China, Greece, the United Kingdom and the United States, among others.

Fortunately, according to Women, Business and the Law, these are among the 152 countries where mothers have legal recourse against these unlawful practices, as all their legal systems explicitly prohibit the dismissal of pregnant workers as established by international legal good practice. The ILO Conventions on Maternity Protection and Termination of Employment as well as the Convention on the Elimination of All Forms of Discrimination against Women (CEDAW), define as unlawful the termination of the employment of a woman on the grounds of pregnancy, birth of a child and nursing, and mandate countries to explicitly provide women protection against dismissal during the entire duration of the pregnancy.

Yet in 20% of economies worldwide, women have no legal remedies in such cases and can be fired just for being pregnant. According to the latest Women, Business and the Law 2021 report, 38 of 190 economies do not prohibit dismissal of pregnant workers in their laws. Lack of protections like this make it even harder for women to escape poverty and find stability, especially in light of the hurdles brought on by the COVID-19 pandemic, as stated by the World Bank Group Chief Economist Carmen Reinhart.

The data show that all economies in only two regions provide protection from termination on grounds related to pregnancy – OECD high-income and Europe and Central Asia. However, there is still a lot of work to be done in economies where job-related protections for pregnant workers are still lacking. Specifically, in 50% of economies in the Middle East and North Africa and in South Asia, 44% of economies in East Asia and the Pacific, 21% in Sub-Saharan Africa, and 9% of economies in Latin America and the Caribbean. 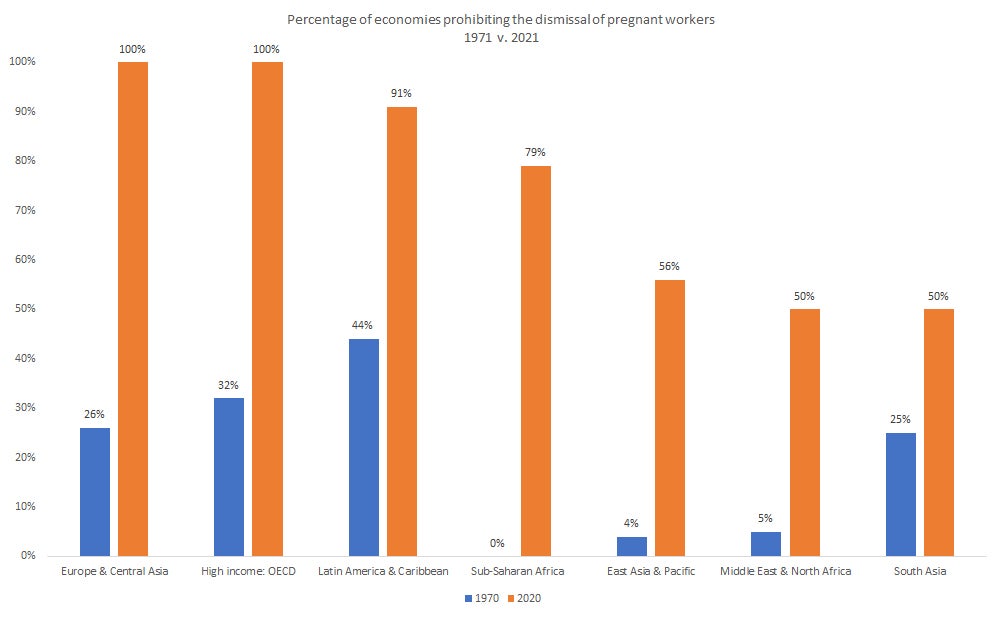 Source: Women, Business and the Law

For many working women, while pregnancy may present physical, psychological, or medical challenges, it can also lead to work-related concerns and consequences, such as discrimination. Pregnant workers often face multiple types of discriminatory treatment and behavior, such as denial of promotions, redundancy, and pay and job assignment decrease, among others. Such practices not only can have an impact on women’s career prospects, but also on the health of the mother and the baby. This situation was clearly exacerbated during the COVID-19 pandemic, where job loss, health related concerns, and disrupted healthcare services made pregnant workers more vulnerable than ever.

Research shows that most women are dismissed during the early stages of pregnancy, even before taking maternity leave, which reinforces the need for protection throughout its entire duration. Protections during pregnancy not only grant economic stability to women and their families when they need it the most, but also allow pregnant workers to contribute to the economy. It is further is associated with a positive business impact and sustained productivity in SMEs.

Further, where explicit legal prohibitions against the dismissal of pregnant women are not in place, such as Singapore and Malaysia, job applicants reported pregnancy as one of the leading causes of discrimination in employment and courts failed to deem companies liable for pregnancy discrimination practices.

While legal prohibitions alone may not eliminate discrimination, in one-fifth of economies in the world, they could provide a steppingstone to a fairer and safer working environment for women. Reforms ensuring equality are important more than ever, especially after the pandemic's devastating effect on working women. Together with legal enforcement and increased awareness around these unfair practices, changes in the law can greatly contribute to making gender equality a reality all over the world.