5 lessons from past episodes of debt relief

Global debt levels surged in 2020 as a result of the COVID-19 pandemic. A rise in debt has led to several countries initiating debt restructuring, while many others are in or at high risk of debt distress and may also need debt relief. Historically, there have been several frameworks that coordinated debt relief among multiple debtors and creditors, including the Paris Club, the Brady Plan, the Heavily Indebted Poor Countries (HIPC) Initiative and the Multilateral Debt Relief Initiative (MDRI). The G20 Common Framework provides a structure for debt relief for low-income IDA eligible countries, but largely avoids the issue of outright debt reductions (World Bank 2022). There are several lessons to learn from previous initiatives that could help make the Common Framework more effective.

Read more on the topic in the January 2022 Global Economic Prospects. 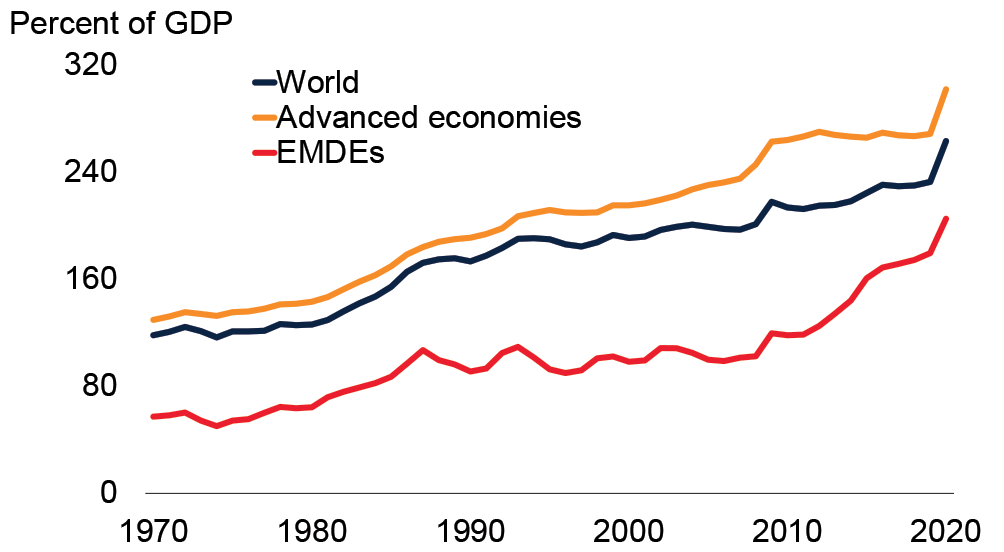 Global government debt registered its fastest single-year jump to its highest level in half a century to 99 percent of GDP. EMDE government debt rose 63 percent of GDP, its highest level since 1987. As a result, debt vulnerabilities have risen: more than one-half of low-income countries are in debt distress or at high risk of debt distress; some countries have already defaulted on their debt; and debt restructurings have been completed in some, or are underway in others. 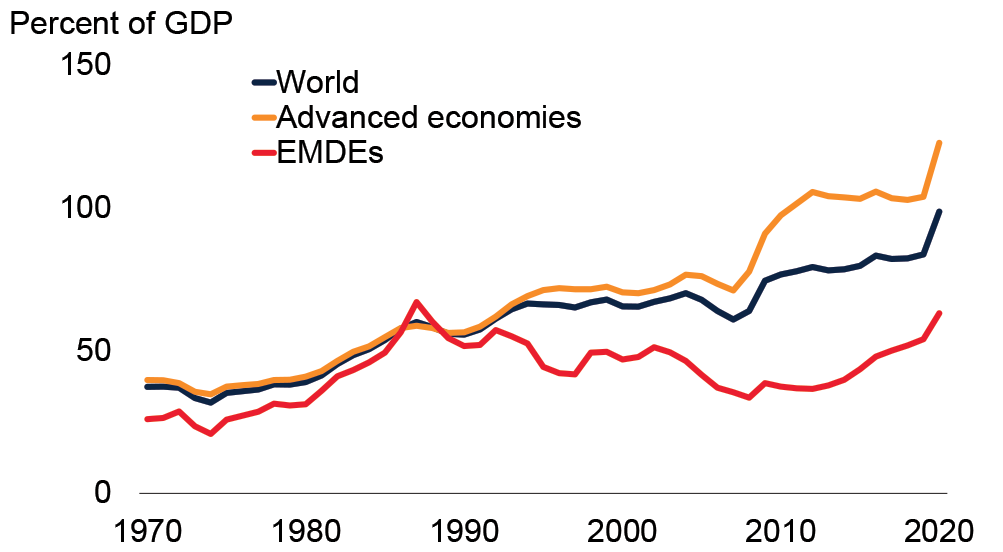 The G20 Common Framework provides a forum for DSSI-eligible countries with unsustainable debt to seek debt relief. The Common Framework is the latest example of an umbrella initiative to resolve debt distress that coordinated multiple creditor and debtor countries within common frameworks. These have included the Multilateral Debt Relief Initiative (MDRI) from 2005; the Heavily Indebted Poor Countries (HIPC) Initiative from 1996; the Brady Plan from 1989; and the Paris Club which was established in 1956. 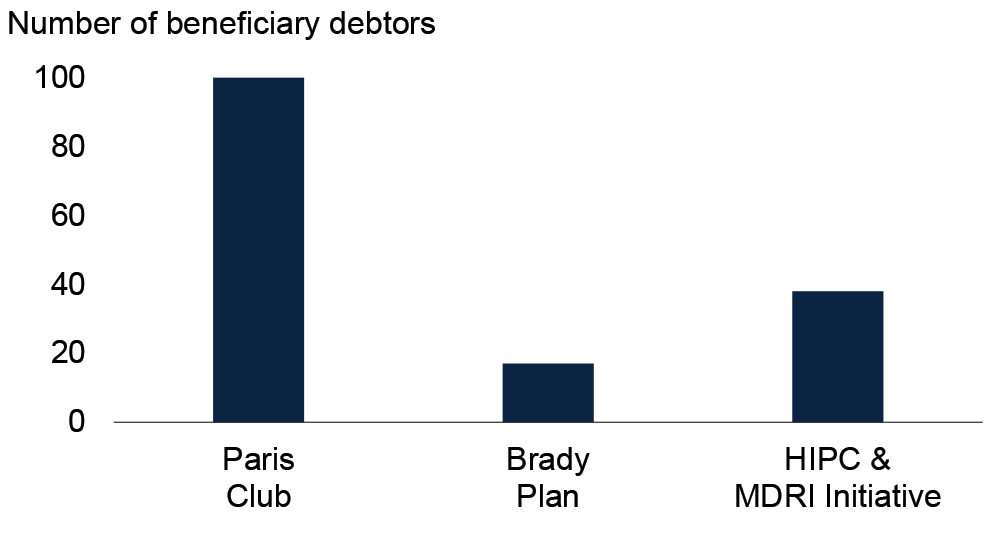 4. These initiatives had similarities, but also differences

In these initiatives, debt relief was granted to a number of debtor countries on common principles. Debt relief was substantial, with reductions of 37 percent, on average, under the Brady Plan and around 60 percent under HIPC/MDRI—although it typically took several years before debt relief was provided. The initiatives were also typically preceded by a series of less ambitious, unsuccessful debt relief efforts which focused on maturity extensions and interest rate reductions. There were also differences, especially regarding the participation and incentives for private sector creditors. 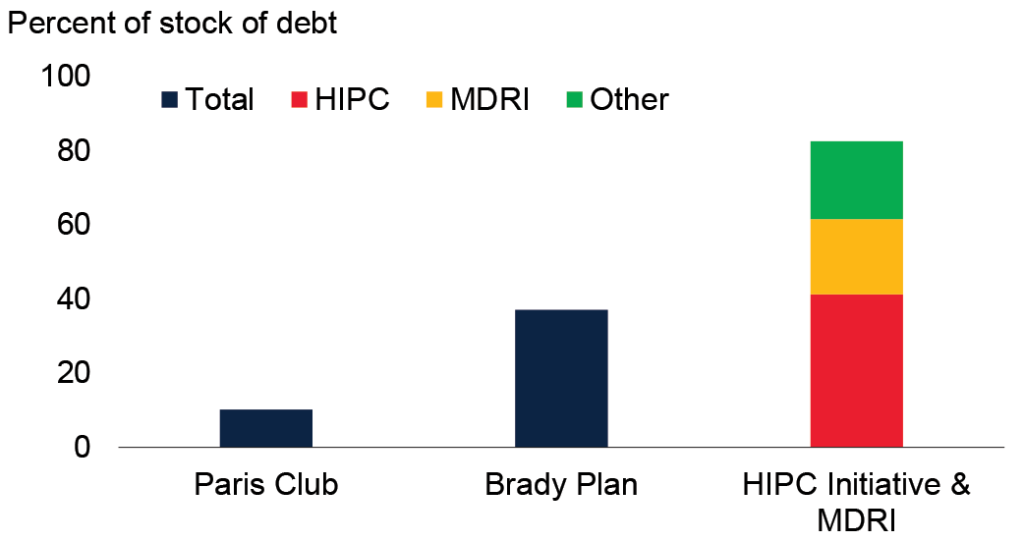 5. Delays in resolving unsustainable debt were associated with a lost decade of growth

The delay in resolving unsustainable debt had severe economic consequences for the Brady countries and the HIPC countries. The Brady countries, notably in LAC, suffered a “lost decade” of growth, with GDP per capita only recovering to its precrisis level by 1993. Growth strengthened following debt relief but remained well below its precrisis rates. Among low-income countries, GDP per capita fell by an average of 0.2 percent per year between 1980-99, due to weak economic growth and high population growth. In the decade after debt relief, GDP per capita growth in the LICs of 2001 averaged 2.9 percent a year between 2001 and 2011. Besides debt relief, other factors also contributed to these developments, including robust global growth in the period before the global financial crisis, the prolonged commodity price boom over the 2000s, and a reduction in conflict and violence in LICs. 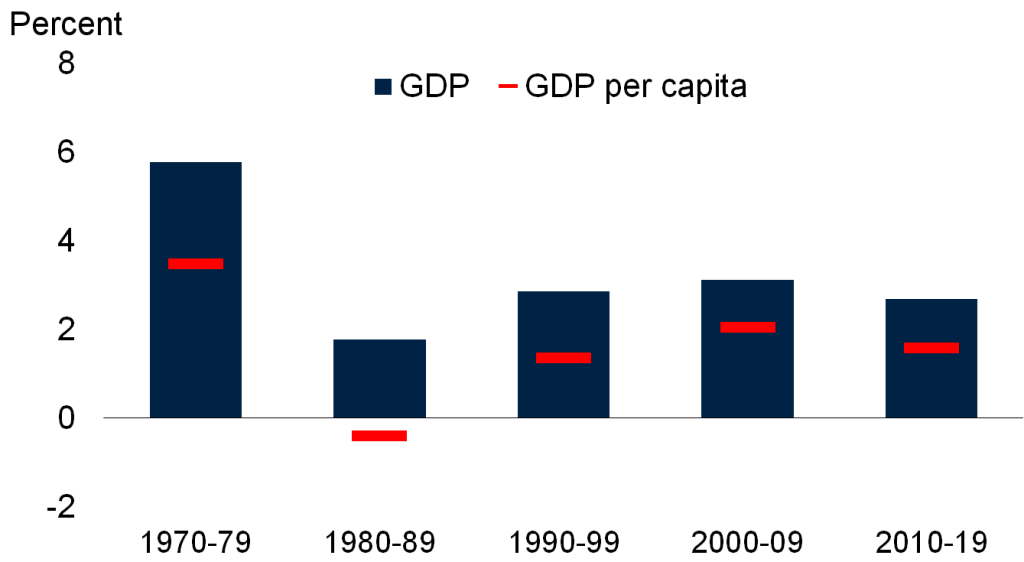 The G20 Common Framework is a welcome development, but more progress is needed

Given the surge in debt levels and rising risk of debt distress, the G20 Common Framework is a welcome development, particularly since it brings both Paris Club creditors and major non-Paris Club official creditors together. The lessons from past debt relief initiatives, however, highlight the challenges to providing timely, comprehensive debt relief. As the Framework continues to evolve, its structure could be improved to increase its effectiveness.

First, the Framework needs to provide faster debt relief in order to be effective—the first country that requested treatment under the Framework made the request in January 2021 and the process has yet to be completed. Measures to formalize the implementation process with a clear timeline and transparent rules could help reduce the time taken to provide debt relief. In addition, at present many middle-income countries that also face very high levels of debt are not eligible for debt relief under the Framework, which limits its potential to resolve unsustainable debt globally.

Second, the Framework will need a mechanism to incentivize private sector participation. The current lack of incentives may limit the effectiveness of any agreement. Clarifying the methodology of how to assess different types of debt relief from private creditors would also help assess private sector comparability and encourage creditor participation.