Adversity gets in the brain

“Individuality is the product of both biological inheritance and personal experience,” said Professor Charles A. Nelson during a recent presentation at the World Bank. Professor Nelson has been studying neurobiological development and the effect of adversity on the brain for some time now (e.g., here and here). So we asked him to open the black box of brain development for us and help us understand what it all means to those of us working on ending extreme poverty and boosting shared prosperity. Below are some highlights from his talk.

The role of experience on brain development. There are a lot of things we’re still learning about the brain, but one thing we do know for sure is that genes alone don’t determine who we are. Experience is crucial to brain development, and it interacts with biological endowments (nurture x nature) to define our potential. Because most human development takes place during the first six years of life, and because developing systems are particularly susceptible to environmental influence (plasticity), the impact of experience on the brain is disproportionately high during early life. Early experience shapes the functional properties of immature brains. The ability to change brains and behavior decreases over time – it’s never too late, but the earlier the better. Which is why investing in the environmental inputs the brain needs to properly develop in the early years (nutrition, health, nurturing interactions, protection from stress) is so crucial.

What happens when the brain doesn’t get what it needs? Developing brains’ high plasticity during early life is a double-edged sword. If the brain does not receive the inputs it needs, its wiring is altered. Adverse environments and deprivation, including malnutrition, neglect, and toxic stress during early life, disrupt normal biology and developmental trajectories, physical and mental well-being, learning and behavior later in life. And the impact of adversity on key developmental domains is worse during times of rapid development and high plasticity (sensitive periods). Reversing these effects later in life is very hard.

The Bucharest Early Intervention Project. Nelson showed results from a randomized controlled trial of foster care for infants in Romania’s bleak orphanages who have been followed into adolescence. The findings to date are sobering: early biological and psychosocial deprivation associated with institutionalization lead to profound deficits in IQ, socio-emotional behaviors (i.e., attachment), brain activity and structure, alterations in reward sensitivity and processing, and a greatly elevated incidence of psychiatric disorders and impairment. Children who were placed in high quality foster care between 6 and 31 months had significantly better developmental outcomes, except for executive functioning (i.e., memory and cognitive monitoring). Notably, brain activity of children placed in foster care before age 2 is comparable to that of children who were never institutionalized (figure below), suggesting a sensitive period after which brain activity is less likely to recover from severe psychosocial deprivation.

Brain activity changes as function of intervention and timing 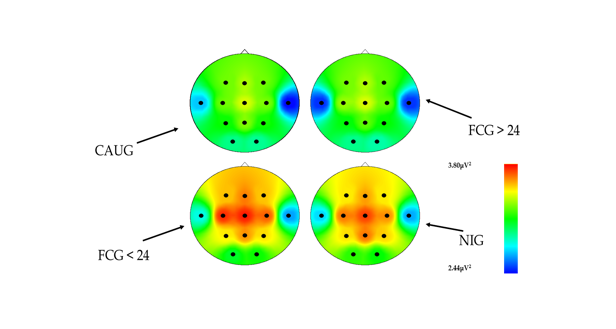 Brain imaging in Bangladesh. Nelson also shared findings from a study using neuroimaging tools (EEG, fNIRS, MRI) to study cognitive development in children 6 and 36 months old exposed to multiple types and levels of early adversities in Dhaka, Bangladesh. For both cohorts, results show reduced cognitive outcomes for those children growing up in the most adverse conditions. Factors such as maternal education, inflammation, and stunting due to chronic malnutrition mediate these poor outcomes. As the figure below shows, these kids’ brain anatomy, metabolism and physiology are all impacted by adversity, particularly stunting.

Total white and gray matter in infants by stunting status 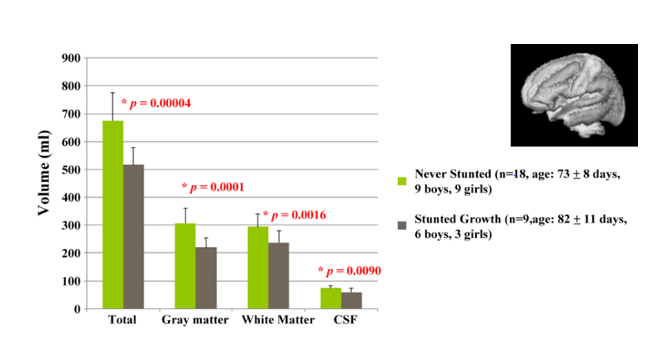 Source: Nelson and others (forthcoming).
Note: Data obtained from 2–3 month old infants using MRI in Dhaka, Bangladesh. There are two groups: 18 infants who are stunted (malnourished) and 9 who are not stunted (not malnourished). The histograms display (moving from left to right) the total amount of brain volume, the total amount of gray matter (gray matter refers to cell bodies and neural tissue that does not have any myelin), total amount of white matter (brain tissue, such as axons, that are coated with myelin, a fatty substance that facilitates more efficient neural processing), and finally, cerebral spinal fluid. The plots show that the stunted infants have less overall brain tissue, less gray matter, less white matter and less CSF—the effects of malnutrition showing up in the brain as early as 2–3 months of age.


What can we learn from these studies? After all, the environmental deprivation in both cases was extreme. And yet the lessons may be more generalizable than one might think – for at least two reasons. First, the kind of adversity affecting the children in these studies is not rare. For instance, 1 in 4 children worldwide are stunted. Although harder to measure, incidence of neglect is high (e.g., here and here), even if not always as severe as in the case of the Romanian orphanages.

Second, other studies conducted in less extreme settings (e.g., here and here) have also shown differences in brain structure and functioning linked to socioeconomic status. So adversity need not be extreme to undermine the brain. Aside from chronic malnutrition and neglect, many other factors associated with poverty can affect the brain (disease, toxic physical environments, insufficient stimulation, violence, and the stress that all of these cause). And yet some of the poor children in these studies were OK. So, when does deprivation undermine neurobiological development? Is it a matter of intensity (how ‘bad’ the environment is), length of exposure, or a child’s age at exposure? The findings from the Romania study suggest that it is probably some combination of the three, but we can’t fully answer these questions yet. However, given that 25 percent of children under 5 in low- and middle-income countries live in extreme poverty, the number of young children whose brains may be at risk of not reaching their developmental potential is staggering.

The emerging neuroscience insights shed light on the profound effect of adversity in children’s biological development. Along with behavioral and anthropometric evidence, it can help us better identify the most effective interventions to help poor kids reach their potential. While Prof Nelson and colleagues continue to learn about the brain, the task at hand is to improve poor children’s environments during the early years of life, both physical and social. There is ample scope to do this, as children under 3 currently receive the lowest level of public investments (e.g., see here or here), and as the forthcoming World Development Report 2018 will lay out. Ensuring children’s basic needs are met and improving the quality of care they receive are a priority. Making policy makers aware of the potential for individual and social gain from investing in these children—as well as the cost of not doing so—can lead to much needed action and help galvanize multi-sectoral and sustained investments to help children get on the right trajectory.
Topics
Health
Education
Countries
Bangladesh
Romania
Regions
The World Region
Series
World Development Report 2018