Are girls smarter than boys?

Parents are 2.5 times more likely to google “Is my son gifted?” than “Is my daughter gifted?” A gap like this—in perceptions and expectations—is not new.  Myths about ‘gendered’ learning gaps have persisted since at least the Victorian era. Could these be true? Data from internationally benchmarked tests show that boys lag behind girls on test averages. In all but six of the 72 countries participating in PISA, 15-year-old boys are more likely than girls of the same age to be low-achievers on the composite average of all three subjects tested. Whether on Latin America’s TERCE, the SAT and the NAEP in the United States, or an array of national and regional assessments around the world (here, here, here, and here), girls outperform boys on total test averages in the majority of countries and economic regions.

Behind the averages is a more complex story. Boys’ test scores are much more dispersed (here and here). In fact, boys outscore girls at the top of the distribution, and they underperform at the bottom. Across the OECD countries, 6 out of 10 underachievers—“those who fail to meet the baseline standard of proficiency across the tests”—are boys. Boys are more likely than girls to repeat a grade, less likely to attend college, and less likely to persist in attaining a degree if they do (here and here). Despite this higher performance by women, female college students continue to be under-represented in technical fields like engineering and computer science.

This higher average performance by girls masks important variations across individual subjects (as demonstrated in the figure below). While girls consistently score higher in reading and writing across the assessments, boys tend to perform better on assessments in mathematics and science in the majority of countries in which these tests—and others, such as the PASEQ and SACMEQ and the Early Childhood Longitudinal Study—are administered. The Middle East seems to be the only region for which the mathematics advantage for boys does not hold. This male advantage in mathematics is otherwise so pervasive, in fact, that a gender gap is observed even when analyzing the results of twins of different genders in Chile. 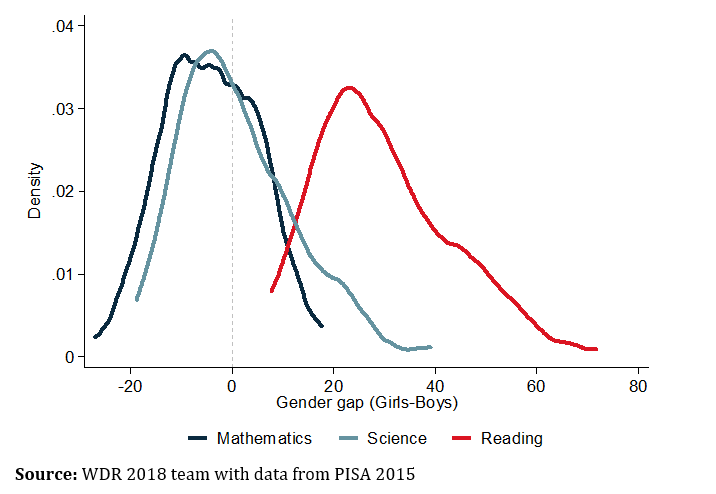 Gender-based gaps emerge early on and grow over time

While girls and boys perform at equal levels in both mathematics and reading scores between kindergarten and Grade 2, boys score slightly better in mathematics and worse in reading starting in Grade 3. This subject-specific gender gap continues to grow through elementary and secondary schools (here, here, here, and here).

A number of biological and socio-cultural causes have been proposed to explain the observed gender-based gaps in learning.

Are there gender-based differences in brain structure? Possibly. General intelligence tests suggest that there may be no overall differences between male and female cognitive ability. But there do appear to be gender differences in brain development and competency on specific cognitive tasks. Boys have larger brains, but girls’ brains mature faster. The hippocampus, where memory and language are derived from, develops more rapidly and is larger in girls than in boys. Girls also have more of their cerebral cortex defined for verbal function. This impacts vocabulary, reading, and writing skills. Boys, on the other hand, have more of their cerebral cortex defined for spatial relationships. As a result, they outperform girls at visual-spatial tasks and learn more easily through movement and visual experience. This impacts mathematics skills.

Girls also produce more serotonin and oxytocin, which may make them calmer, more interested in emotional connection, and capable of maintaining focus for longer periods of time. A study found that middle-school girls edge out boys in overall self-discipline. Girls were more adept at “reading test instructions before proceeding to the questions,” “paying attention to a teacher rather than daydreaming,” “choosing homework over TV,” and “persisting on long-term assignments despite boredom and frustration.” These differences in male and female brain structures and in exposure to hormones might influence gender-specific learning advantages (here, here, and here).

Do teachers affect this gender gap? Potentially. Male and female teachers might have unique biases in how they engage boys and girls in the classroom. For example, there is evidence that teachers are more likely to praise comments made by boys but merely acknowledge comments by girls. Similarly, cognitive process theories suggest that teachers may have different academic expectations of boys and girls, and students may be responding to these (a Pygmalion effect). Students may also be responding to a teacher’s gender rather than a teacher’s behavior. For example, students may be more responsive to a same-gender teacher due to role-model effects.

Do societal expectations shape outcomes? Absolutely. Gender-gaps may arise from differences in socially-derived confidence. Commonly held gender beliefs attribute language as a female domain and mathematics as a male one (see also here), and these assumptions seem to define how girls and boys absorb social notions of masculine and feminine behaviors (here and here). As a result, girls tend to have lower confidence in their ability to solve mathematics and science problems and are more likely to express strong feelings of anxiety towards mathematics (here and here). Girls as young as 6 are conditioned to believe that certain activities are “not for them” because they are not smart enough to engage in those activities. This stereotype threat is so pervasive that a study found female subjects underperformed on a math test when told that the test produced gender differences but did not when told the opposite. Even among high-achieving girls, female students reported being less interested in mathematics than their male peers and assumed that they were less competent. These beliefs translate into lower test performance with important repercussions for female participation in STEM advanced courses and careers.

Boys, on the other hand, seem to adopt a concept of masculinity that includes a disregard for authority, a disinterest in academic work, and a tendency towards being disruptive, and they act accordingly for fear of being excluded by male classmates. When comparing students who perform equally well in reading, mathematics, and science on the PISA assessment boys are more likely than girls to report that they had received lower marks in both languages and mathematics classes in school and to have repeated at least one grade before the age of 15.

So are girls smarter than boys? In some ways, yes. But they also lag behind boys on important domains. The crucial questions are: how much of these gender-based gaps are the result of social constructs, and how do we help girls (and boys) break free of these constructs? Great post! I am not a specialist, and this is super-informative. How well are studies based on standardized tests able to control for selection into actually getting to take the tests? If only the smarter girls or boys, or if only the girls from certain socio-economic backgrounds get to go to school in the first place, then the comparisons of tests scores will confound gender and other effects.

Such an interesting look at gender differences and the grey area where nature and nurture collide and what results from this collision. I agree with what you said about the importance resting in the break down of social constructs--how many amazing ideas/experiments/cures/etc. are being held captive because our society has created these gender barriers? And what would it look like to break them down?

No. Girls are not smarter than boys, girls are smart AS boys!

Very interesting study, but females are viewed as more of victims than males. Also in the last paragraph you would have put "and boys" out of parenthesis, it seems as if to help boys is not as important than to help girls.

Makes sense that women are smarter intellectually, physically, emotionally and spiritually smarter. Women are afterall creators of Life itself, not men. Men are merely sperm donors, financial providers and physical protectors in the human equation.

From the time a female is a child she already has the mechanisms to lead others and create within her. She is a future mother and the most important person to her child or children. She is the centre of that child's world and vice versa from beginning to their end in life. It makes good sense why she more 'smarts' than a male whose functions in human life are predictable and limited.

wow! there is one area in which males excel over women and it is the only one that counts. Its the proof is in the pudding test. The last I checked women are chasing men in leadership. ts men that are ahead. How is that possible if women are smarter? how is it that the dumber males were able to subjugate the smarter females? Can't say its because men are stronger because everyone knows brains trumps brawn.

I like how feminists say that “equality is both for men and women” and then every third feminist is going to be like you. How do you expect men to support feminism? You’ve really got some nerve to say that your gender is superior! Its sexist, and It’s the same thing as saying that whites are better than blacks. Men are just as much life givers as women. Women can’t get pregnant without men. It’s scientifically proven that children that have father in their life have a lot more confidence and better grades. And also, there’s some kind of interesting balance in “smart” and “dumb” males. There are more dumb males, but there are more smart males at the same time, while the intelligence of females doesn’t vary as much. This is why most scientists and successful people are men, but there are a lot of homeless men at the same time. Connecting the dots?

The biggest reason why females are out performing males in education is because females are born females and don't have to undergo a transformation into being a female. This causes females to have a huge maturity advantage over boys who until puberty are defective girls by another name and have to undergo a transformation process from defective female into adult males that takes another 10 years to be completed. This means that from k-12 boys are forced into competition with girls who have a more fully developed brain.

This has always been true and before World war II posed no consequences for the outperformed boys because girls got married and stayed home to raise a family. Now women are not staying home but are pouring into the work place and so now the undeforming boys are being outperformed in the work place by their women coworkers who outperformed them in education. We can't hold the more mature women back for the sake of the immature males. Say hello to the
matriachy!

Wow!I never new that girls were smarter than boys!

Thank you for the good information!