The following post is a part of a series that discusses 'mind and culture,' the theme of the World Bank’s upcoming World Development Report 2015.

In Ethiopia, 3% of students will go to college.* But how many would you guess say that they want to?

The answer is 75%. That is how many of the 14 to 15 year-olds surveyed by the Young Lives team out of Oxford said they would like to complete a university degree. Of those kids, 9 in 10 expect to get there. 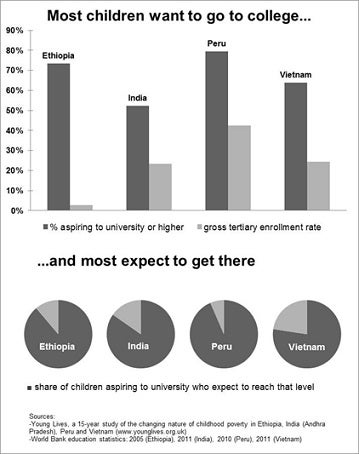 The Young Lives survey covers three other countries besides Ethiopia: India, Peru, and Vietnam. In those countries, too, college hopes again are well above enrollment rates. And these are kids who were chosen for being poorer than average, which means that they are even less likely than the typical kid in their country to go to college.

How can we interpret this optimism? For starters, we could dismiss the data. Maybe what we have is an experimenter demand effect—the kids said “college” because they wanted to impress the interviewer. For this reason economists tend not to trust answers that don’t involve actual decisions for which respondents bear the consequences of their stated preferences. With nothing at stake, why should you say what you really believe?

Supposing the kids did want to please the interviewer, we might still learn something from the data. For one thing, if we assume everybody exaggerated his or her ambition by about the same amount, we could still look for differences between kids along the lines of gender, wealth, parental traits, and performance in school.

Even the idea that kids might overstate their aspirations in order to impress an interviewer is noteworthy. People think socially. We are a part and a product of the world around us. When we make decisions, we often consider what others, such as peers and parents, might expect.

And if all of these kids really do hope and expect to go to college, what then? Is there a link between aspirations and the outcomes we care about, such as education, happiness, or mental health?

If having high aspirations means kids are more likely to do better in school, or to plan more for the future, or to work harder instead of giving up when faced with obstacles, then we would want to better understand the source of those aspirations. What is it about these kids that causes them to dream big? What might encourage other kids to do the same?

As we consider the importance of behavioral and cultural factors for development, aspirations are worth a closer look. Discovering this surprising pattern in the data was the first step. The next step is to figure out if it matters, how it matters, and then what, if anything, to do about it. I will report on all these issues in future posts.

*Gross enrollment ratio: the ratio of total enrollment, regardless of age, to the population of the age group that officially corresponds to the level of education shown. Tertiary education, whether or not to an advanced research qualification, normally requires, as a minimum condition of admission, the successful completion of education at the secondary level. Source: United Nations Educational, Scientific, and Cultural Organization (UNESCO) Institute for Statistics. Most striking is that these kids, although from very poor families or areas understand that a college education is their only hope of getting out of the cycle of poverty, and lead fulfilled lives. I believe the answers were genuine, and merely reflect a universal human aspiration, regardless of social origin, religion, ethnicity or race. A wonderful finding, Scott!