Services can now be stored, traded digitally, and are not subject to many of the trade barriers that physical exports have to overcome. Services are no longer exclusively an input for trade in goods, but have instead become a “final export” for direct consumption. Importantly, services not only have become more tradable, but can also be increasingly unbundled: a single service task or an activity in the global supply chain can now be fragmented and done separately at different geographical locations. This has led to a new channel of growth, what we call sophistication in service exports.

The rapid growth of China and India has rekindled the debate on the drivers of growth and development. China’s growth is led by traditional manufacturing, while India’s growth focuses heavily on services—two entirely different paths towards rapid development. Traditional theory and thinking focus on development as a transition from agricultural to industrial production, with manufacturing being the prime “engine of growth”.

However, technology has been changing the very nature of the production frontier for services, leading to a growing share of services in GDP growth and in particular to a rapid increase in service exports. The mid–1990s saw two seemingly separate but related developments. First, the revolution in information and communication technology (ICT); and second, rapid developments in those global forces often referred to as the 3Ts—technology, transportability, and tradability. These two events had a profound impact on the nature, productivity, and tradability of services. They resulted in the rapid growth of what can be called modern impersonal progressive services, such as Information Technology, business-related, transcribing medical records, call centers, education, entertainment production services etc. These services differ significantly from the traditional personal services, which demand face-to-face interaction.

Overall, these developments imply that services have become increasingly similar to manufacturing goods in the sense that they benefit from technological advances and benefit from the potential gains from specialization through economies of scale, agglomeration, network effects, and division of labor.  In addition, these sophisticated services mostly require digital labor mobility, providing an opportunity for relatively innovative, high-tech job creation in low and middle-income economies.

The growing importance of services and sophisticated service exports is reflected in success stories such as the Nigerian film industry, call centers in Kenya, business consulting, knowledge-processing offices in Singapore, accountancy services in Sri Lanka, HR processing firms in Abu Dhabi, and the growing internationalization of innovation, R&D, design, and marketing.  These are all different forms of the same phenomenon.

The distinctiveness of increasing service export sophistication and growth is twofold: i) traditional service activities gain in productivity from technology, transportability and tradability, and ii) there is a host of new service activities that have emerged (due to unbundling and new technological innovation).

Increasing sophistication in service exports has important implications for countries that are stuck in a “middle-income trap” such as Malaysia, Vietnam etc., or for countries that wish to sustain their rapid growth such as India, Sri Lanka etc.. Further, re-igniting growth in United States and G-20 economies will partially rely on innovation and competitiveness in sophisticated service exporting firms. It also offers a prospective route for growth in Africa. In the global rebalancing, service exports might be an imperative channel either through the lens of India-China, South-South Trade, Advanced-Emerging trade clusters or possible new trade networks.

Service exports and increasing its sophistication may be an additional channel for sustained high growth. We highlight a need to refocus policy debate on drivers of growth.  Learning from this phenomenon in development policy practice will depend on country specific factors and is an area of future work.

There are many examples but the Indian experience has shown that even when approximately one percent of its population is engaged in high productivity service exports, it has contributed to overall high growth. Factors such as relatively low transportation costs (sometimes even negligible), less susceptibility to trade barriers, lower capital intensity, pre-requisite of soft infrastructure versus hard infrastructure ,and a mix of regulations may drive competitiveness amongst service exporting countries. This in turn may drive specialization and sophistication in service exports. Countries should continue to build on specialization, but also extend this idea to sophistication in service activities as a potential route to economic growth. 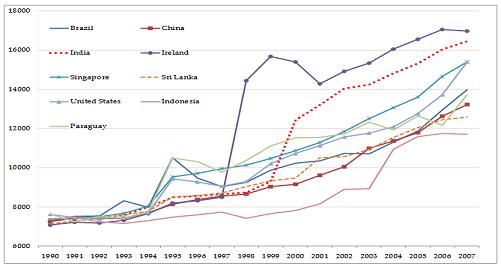 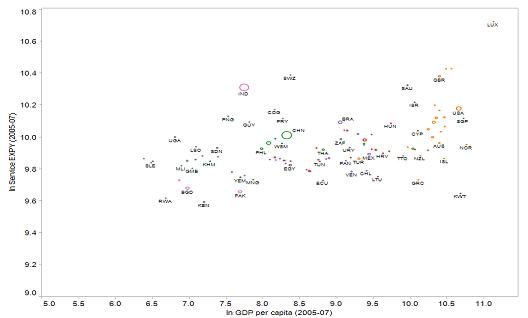