A view that has gained some traction since the global financial crisis is that the emerging market economies may be better off by keeping their capital accounts relatively closed (Rey, 2015); or by managing their capital accounts in a countercyclical fashion (IMF, 2012), designing these policies as a regular instrument of economic policy and not just as a measure of last resort (Jeanne, Subramanian, and Williamson, 2012). Commensurate with these views, recent theoretical contributions have established that capital account measures may indeed be welfare enhancing.

In a recent paper, we inform the debate on CFMs by analyzing how emerging market economies use them in practice. We construct a novel database of policy measures, including CFMs, for 47 emerging market economies between 1999:Q1 and 2016:Q2. The term capital flow measures refers to all quantitative or price-based regulations of capital flows, including macroprudential measures pertaining to capital flows. This subsumes other commonly and interchangeably used terms such as capital account policies, capital controls, or capital account liberalization. We separately code CFMs for different kinds of capital flows--FDI, portfolio flows, and banking sector flows; for inflows and outflows; and for resident and non-resident flows, thus altogether constructing 12 different series. We also construct various composite indices of CFMs, particularly for resident inflows, resident outflows, non-resident inflows, and non-resident outflows. To our knowledge, this is the first such database to be constructed at quarterly frequency for a large and representative set of countries.

We relate the use of capital flow measures to domestic business cycles, capital flow cycles, and global financial cycles; and compare the use of CFMs with a full array of alternative policy tools including monetary policy, macroprudential measures, exchange rate adjustment and the use of external reserves.

Our results highlight that emerging market economies use CFMs rather infrequently. There are significantly more easing events than tightening of CFMs, indicating a consistent trend toward the liberalization of the capital account, rather than a tendency to ease and tighten capital flows countercyclically. Restrictions on capital flows are changed in about 12½ percent of all country-quarter observations, i.e. substantially less often than monetary policy or macroprudential regulations. When countries use CFMs, they are more likely to change restriction on resident flows, than on non-resident flows; and on portfolio flows, than on FDI or banking sector related flows. 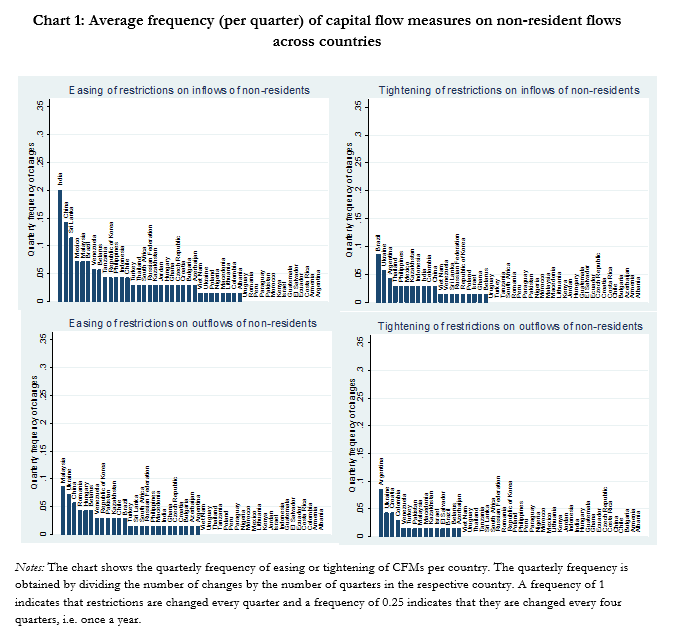 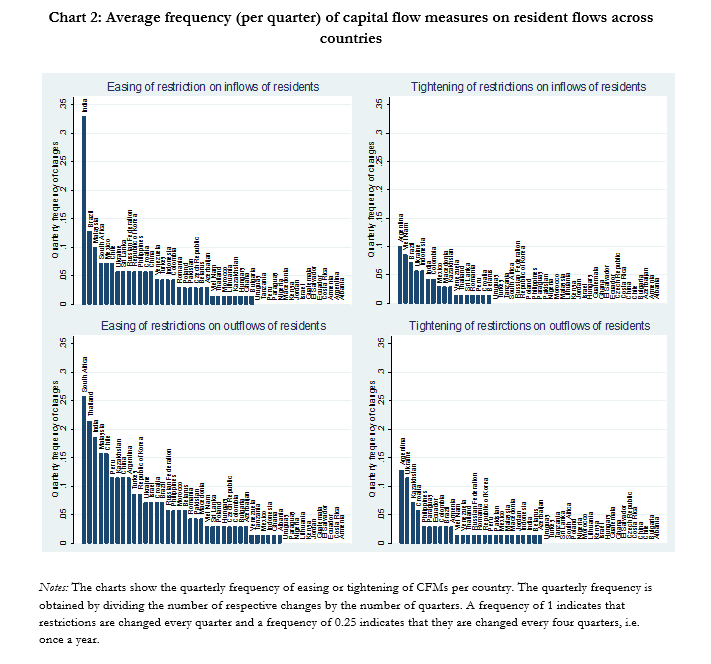 The use of CFMs varies across countries and regions. Liberalization of CFMs is evident more strongly in Asia, with India standing out as a strong liberalizer; while there is a more balanced use of CFMs in Latin America, entailing both easing and tightening of restrictions. In general, countries with an initially more closed capital account have liberalized it more actively over the last decade and half. On the other hand, countries with a substantially liberalized capital account initially are the ones which have tended to more actively use CFMs as a cyclical policy tool. 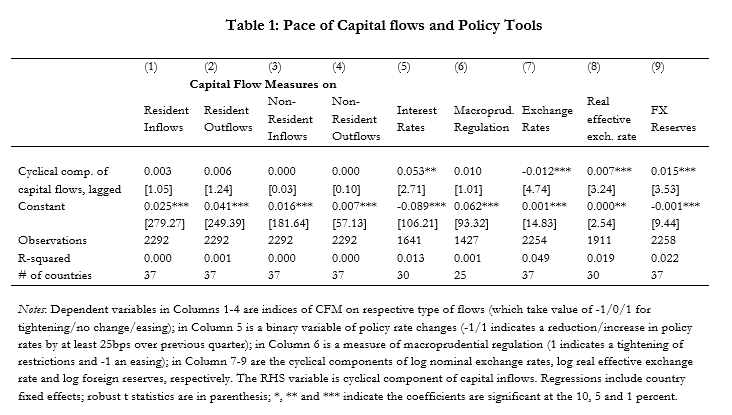 There may be three reasons for why CFMs have not been used as a more active policy tool. First, the use of capital controls may have a negative signaling impact. Investors with imperfect information about the future policy focus and the state of the economy might perceive the use of capital controls as a signal that the underlying problems in the economy are worse than anticipated earlier. This adverse signal is perhaps stronger for countries that have not used CFMs in the past and weaker for countries which rely on such measures more regularly. A second reason could be that the institutional setup for monitoring the use of CFMs in emerging market economies is often weak or nonexistent, unlike other policies, such as monetary policy for which the clear mandate lies with the central banks. A third reason could be that CFMs are deemed to be a blunt and ineffective policy measure.

Our results emphasize that while capital flow measures have been broadly liberalized over time, they have not been a policy tool for the cyclical management of the economy. The tool kit of central banks remains limited to monetary policy and the use of foreign reserves, while exchange rates adjustments play an important role too.