Momentum is building behind a land rights revolution. Last year, just prior to the World Bank’s Annual Land and Poverty Conference, I wrote about the many factors pushing land to the top of the global agenda.  To maintain this momentum we must pay greater attention to gender and women’s land rights.
Anju's Dream

Land is more than an important asset in the fight against global poverty and gender inequality. For most people living in poverty, it is an essential, indispensable means to leading a healthy, safe, and productive life. Despite this, hundreds of millions of people who depend on land around the world – especially women – lack access or secure tenure rights to it.

It has become increasingly well-established that women suffer disproportionately from poverty, and there is ample evidence of the necessity and the benefits of empowering women by promoting and securing their rights to land.

Women need direct, unmediated rights to land for multiple reasons – gender equality, food security, health, family welfare, protection from sexual violence and other forms of physical abuse, to combat abject poverty, and more. Too often, however, legal documents, including land titles and certificates, are only registered in the name of a male family member – fathers, husbands, brothers.

This is frequently the case even in countries with constitutional and other legal protections that stipulate equal land rights for women and men because customary laws and traditions often carry much more weight in communities than statutory legal frameworks. Furthermore, national and local governments and institutions might not have the capacity or technical know-how to enforce or roll out a gender-equitable land titling regime – especially in the face of entrenched social norms.

Take India as an example. In 1956, India passed the Hindu Succession Act which mandated equal inheritance rights for sons and daughters. As my Indian colleague wrote on International Women’ Day last year, it didn’t take; daughters continued to be excluded in inheritance practices because it was assumed they would marry out of the community. And so, the government passed an amendment to the act in 2005 explicitly giving daughters equal rights to their parents’ land and property.

Even with this, she explains, the needle barely moved. In 2013, my organization, Landesa, and UN Women surveyed more than 1,400 women and 360 men in three Indian states, Andhra Pradesh, Bihar and Madhya Pradesh, and found that one in four women didn’t know that they had any right to inherit family land, and just one in eight women whose parents owned agricultural land inherited any of it. The study also found that women were generally unwilling to demand their share of family property for fear of creating conflict with their brothers and other family members. In fact, a majority of women surveyed didn’t know of a single case in which another woman had inherited land from her parents.

This means that generation after generation of family property and resources are concentrated in the hands of men, leaving women and the children they support with fewer tools for climbing out of poverty.

Unfortunately, this is not a phenomenon unique to India. Far from it.

National laws written to protect women’s and girls’ land rights often fail to translate into real change on the ground across cultures, religions, countries, and regions. Thankfully, we have seen a number of innovative and promising programs in India and elsewhere that are helping to lay a path forward. For example, Landesa’s Girls Project, originated in collaboration with the government of India, is educating adolescent girls about their land rights and sensitizing adolescent boys about the benefits of girls’ rights.

To build on this progress, several organizations, including my own, are launching a new global five-year campaign later this year that will focus on closing the gap between policy and practice on women’s land rights. A strong, well-coordinated, cross-sector global campaign comprising of stakeholders big and small – from local grassroots and community-based groups to international development and private sector organizations, and everyone in between – has the potential for significant impact in closing this gap at scale.

We all have a role to play. 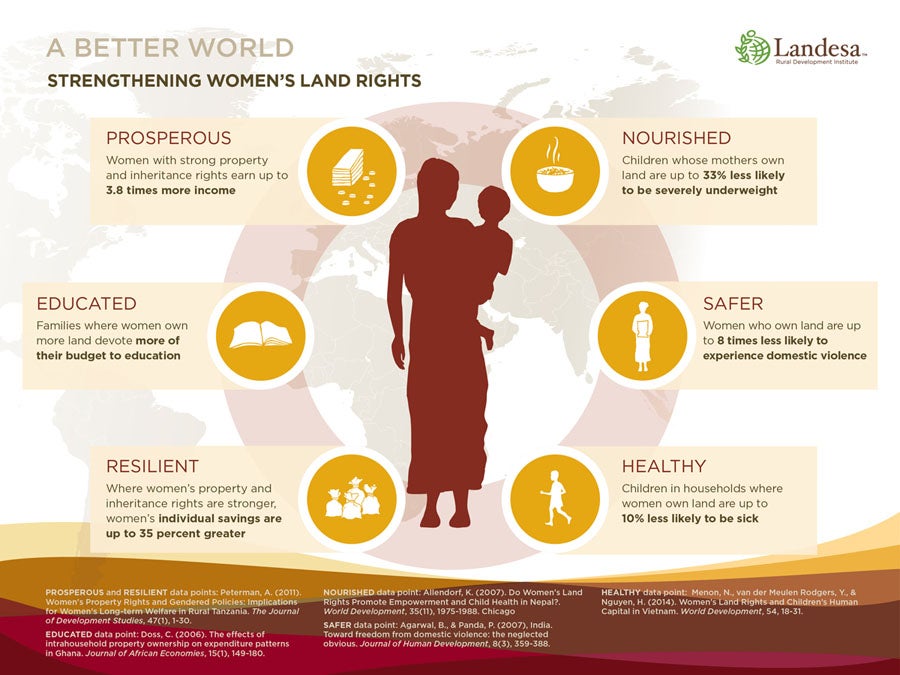 This blog post is also available on Land Portal through the link here.