Cyber harassment: A growing concern in the age of COVID

The COVID-19 pandemic has significantly transformed various aspects of our daily lives. With lockdown measures springing around the world, our new “normal” now relies (even) more on digital platforms. Since March 2020, global internet usage has soared by 50-70%. Innovations in digital technologies have enabled the world to continue functioning as many jobs and services moved online, allowing people to work from home, shop online for groceries, communicate with distant family members and even attend doctors’ appointment through telehealth.

With increased connectivity, the world has also faced an escalation of the negative side of the digital space - cyber harassment. This type of violence can take on various forms such as online bullying, cyber stalking, hate speech and public shaming. However, just like offline violence, cyber harassment perpetuates negative psychological, social and reproductive health impacts on victims, sometimes also leading to offline physical and sexual violence. Additionally, it also has a significant economic impact. For example, new research by the Australian Institute finds that online harassment and cyberhate have cost Australia an estimated total of $3.7 billion dollars in health costs and lost income.

This year, the 16 Days of Activism against Gender-Based Violence call upon us to address all forms of violence against women. Among them, cyber harassment has been intensified by the pandemic and thus actions to protect against this type of violence should be prioritized. Despite the digital divide preventing many women from accessing and utilizing internet services, women are still disproportionately and increasingly affected by digital abuse. Even before the pandemic, women – and especially young women – were more likely to be targets of cyber violence. In the United States for example, 21% of the surveyed women ages 18 to 29 reported being victims of online sexual harassment, a figure exceedingly higher than that of the male counterparts at 9%. Since the onset of the COVID-19 pandemic, there has been a global rise in the online harassment of women and girls, which was also reported in countries such as the Philippines, Australia and India, and in regions such as the Middle East and North Africa.

Combating online sexual harassment is key to fostering a safe online environment. But, legislation to protect women from this lags behind and deters women from seeking justice in fear of not being taken seriously. According to recent data collected by Women, Business and the Law, 29% of economies (56 of 190 economies) have legislation to address cyber harassment. Regionally, the data shows that half of economies (4 of 8) in South Asia provide such legal protection, and three other regions also have a relatively higher percentage than the global average – Latin America and the Caribbean at 38% (12 of 32), Middle East and North Africa at 35% (7 of 20) and OECD high-income at 32% (11 of 34). However, there is a scope for improvement for economies in Europe and Central Asia, East Asia and the Pacific as well as Sub-Saharan Africa to promote legal reforms and policy recommendations on cyber harassment. 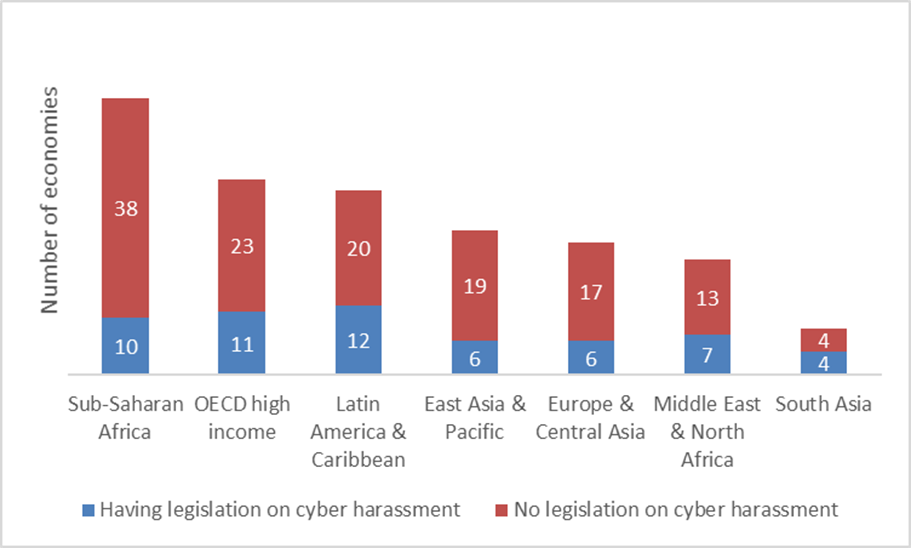 The pandemic has increased our reliance on digital tools and thus the occurrence of cyber harassment. For this reason, urgent measures such as legislative protections must be adopted to respond to this new reality to further protect women and girls and prevent digital abuse. Civil society organizations can also play an important role in raising public awareness and building capacity to identify and report cyber harassment, as well as to seek the right tools or services to reduce the impact. Together with the efforts of international society, governments and policymakers, changes in the law can gradually enable both men and women to equally access a safe online environment. Consultant With Women, Business and the Law