About 35 percent of the world’s population live in 60 upper-middle income countries. Chasing economic growth, many of these countries invest heavily in transport infrastructure. Is this strategy likely to pay off? The question is harder to answer (rigorously) than one might expect. The reason is that governments may invest in expensive and long-lasting infrastructure projects in regions that are poised to grow. This tends to generate a positive association between infrastructure and income levels, not because the former causes the latter, but because of strategic selection. In a recent working paper (Coşar, Demir, Ghose, and Young 2021), we aim to address these issues and evaluate the impact of a major road capacity expansion project in Turkey on aggregate and regional outcomes.

Turkey implemented an extensive program in the 2000s expanding the lane capacities of existing roads. The goal was to improve safety and the reliability of travel times over the national transportation grid through investments across Turkey’s 81 provinces. Specifically, existing two-lane single-carriageways with two-way traffic were upgraded to dual carriageways separated by a small earthen medium, with two-lane one-way traffic on each carriageway. The share of national roads accounted for by the upgraded dual carriageways reached 35% by 2015, up from just 10% in 2002. Meanwhile, the overall length of roadways remained relatively flat. The maps below, digitized from those published by Turkey’s General Directorate of Highways, show the extent of upgrades between 2005 and 2015. 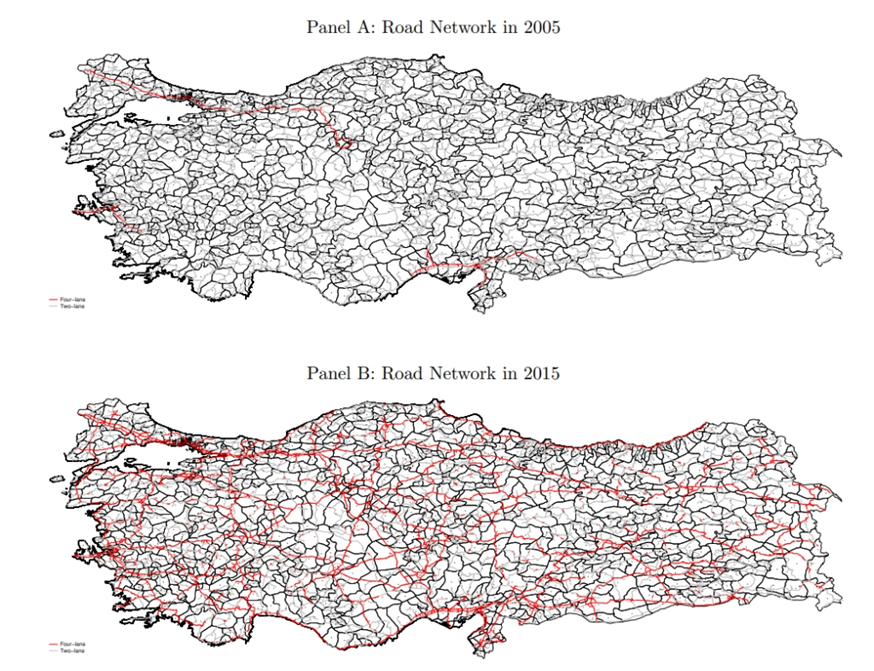 Source: Digitized from official maps provided by the General Directorate of Highways of Turkey.

Our primary research question asks what effect extensive upgrades to an existing paved road network had on domestic trade flows and regional economic outcomes within Turkey. We examine the 10-year change in bilateral trade (from 2006-2016) against the reduced travel times (from 2005-2015).

Building the Data We Need

We mobilize two key datasets with highly spatially disaggregated data to isolate the impact of these expanded roadways on economic activity. First, administrative firm-to-firm transaction data provided by the Turkish Ministry of Industry and Technology (MoIT) allow us to construct measures of domestic trade. These are the same data used to aid VAT collection. We get annual bilateral trade flows of goods aggregated at the level of Turkey’s 913 districts, generated from about 500 thousand buyers and sellers.

Second, we use digitized road network maps, like those shown above, to construct geographic information systems (GIS) software-based travel times between each district. Average travel speeds differ across upgraded and non-upgraded road segments. Using GIS-software and digitized maps for 2005, 2010 and 2015, we calculate the fastest routes and total travel times between all districts for road networks as they existed in each year. Comparing these times across years yields the reductions in district-pair travel times.

With district level data, we can leverage within-province differences in travel time reductions to potential trade partners. While one could imagine some provinces may have been targeted for infrastructure investments, the centralized planning and financing of upgrades makes district targeting extremely unlikely. Luckily, a lot of variation in travel times exists between district centers belonging to the same province and potential equidistant trading partners. That is because the shortest routes might pass through different connections. Consider the two district pairs shown in the maps below. Although their shortest routes are nearly the same length, their average speeds differ a lot (91 km per hour vs 71 km per hour). These two pairs ended up benefiting very differently from road improvements, with the travel time in Panel A decreasing by 39 minutes, but that in Panel B decreasing by 98 minutes! This is the type of variation we exploit in our empirical analysis. 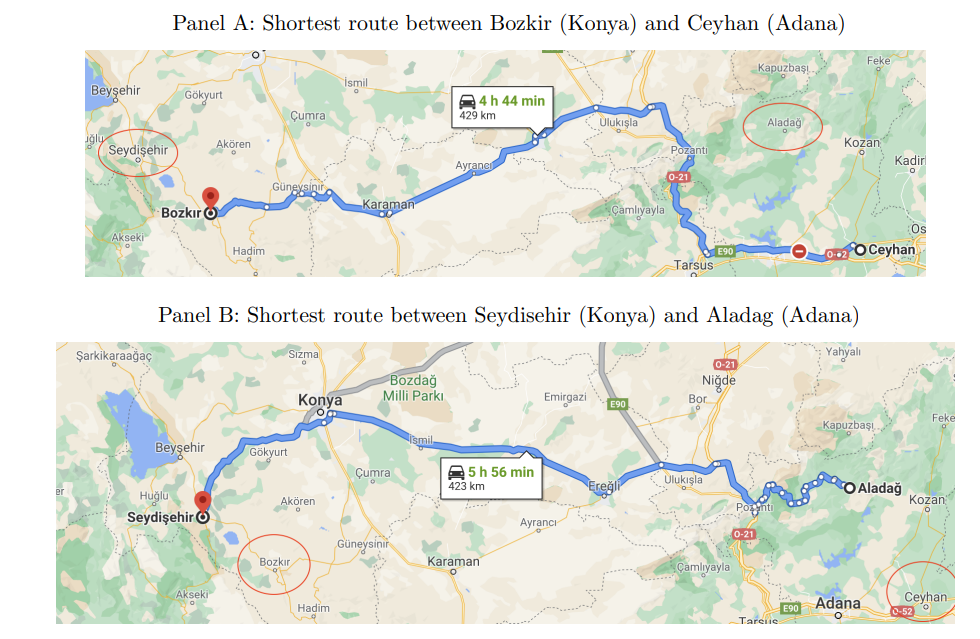 Notes: The upper panel shows the shortest route between Bozkir (Konya) and Ceyhan (Adana), and the lower panel between Seydisehir (Konya) and Aladag (Adana). Source is Google Maps.

Trade flows between districts increased the most for pairs experiencing the greatest reductions in travel times. The figure below shows this relationship, concentrating out fixed effects. Greater reductions in travel times, shown as more negative values on the horizontal axis, are associated with greater increases in bilateral trade flows, shown as more positive values on the vertical axis. 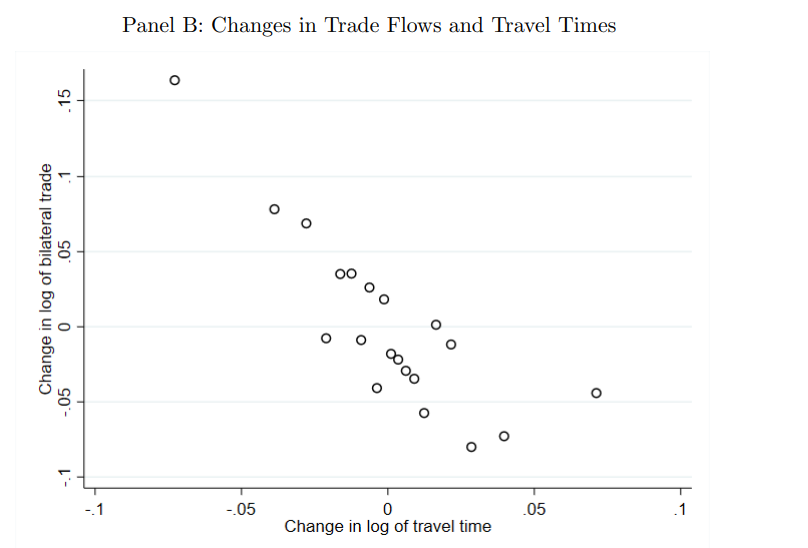 We find that a one-hour reduction in travel time between two districts, which corresponds to a 10 percent decrease at the mean travel time in 2005, increases bilateral trade between those districts by around 8.2 percent. This effect is statistically significant and translates into an almost US$1 million increase in trade flows for a typical supplier district over 10 years.

The effect may be driven by reducing transporting costs of goods between locations, or by reducing the costs of establishing new trade relationships. We find that a district pair that experienced a 10 percent decline in travel time had a probability of 11 percent to start trading in 2016. This effect nearly doubles when we adjust the analysis to account for zero-flows in the estimation sample. This suggests that the extensive margin has a substantial impact on domestic trade.

We are also interested in understanding how the reduction in travel times affect regional economic outcomes, such as employment and welfare. To investigate, we construct a measure of improved domestic market access at the district level. By weighting each district’s time savings on the basis of the destination districts’ population in 2005, we calculate the average connectivity improvement experienced by a district when selling goods to other districts.

We estimate that improvements in domestic market access have a positive effect on aggregate employment at the district level. This is especially beneficial for manufacturing employment. For a district with average connectivity in 2005, we find that a 1-hour improvement in connectivity increases employment in goods-trading industries by 0.36 log points. This magnitude corresponds to slightly more than half of the average district-level employment growth in those industries between 2006 and 2016.

What is the impact on well-being?

The analysis discussed in this post suggests substantial regional effects. However, this is not the whole story. Spillovers between districts mean that one cannot aggregate the local impacts estimated above. Any counterfactual analysis must consider the reallocation of population in the long run, among other things. You can find just that in the second half of our paper. There we start from a workhorse spatial equilibrium model with trade as in Allen and Arkolakis (2014). We endogenize local labor force participation to capture the above described finding from the reduced form analysis. We estimate population-weighted aggregate welfare gains due to the road upgrades of about 2.7 percent.

Allen, T., and C. Arkolakis (2014): “Trade and the Topography of the Spatial Economy,” Quarterly Journal of Economics. Professor of Economics, University of Virginia