Does firm size matter for productivity? The case of informal firms in Africa

There are two fairly accepted empirical observations. First, formal firms are more productive and larger than informal firms. Second, in the formal sector, large firms are more productive than small firms. Should it then follow that, ceteris paribus, the productivity gap between the formal and informal sector firms narrows as informal firms become larger? Alternatively, as far as productivity is concerned, is formalization a simple march from small to large firms or is there more to it than that? These questions were the prime motivation for our recent study where we look at select countries in Africa to analyze the relationship between firm-size and labor productivity within the informal sector. Given that firms in the informal sector tend to be small, the idea that a continuum exists between informality and formality is quite seductive.

The narrative would play out as follows. Entrepreneurs start off as informal firms, and then as they grow they formalize. The expectation is that productivity increases in tandem with the size of the firm. The implications of such a continuum would be a boon for policy makers who would see formalization of the rather large informal sector (about 60 percent) as a way to raise productivity and boost tax revenues. However, if productivity does not rise with the size of the informal firm, this would put a spanner in the works for the informal-formal continuum proposition.

We explored the relationship between size and productivity of informal firms using surveys of informal or unregistered firms conducted by the World Bank’s Enterprise Surveys (ES) in seven countries in Africa between 2009 and 2011. The surveys define informal firms as those that are not registered with the relevant authorities. The analysis is based on a cross-sectional study of 530 firms. The countries covered (survey year in brackets) are Angola (2010), Botswana (2010), Burkina Faso (2009), Cameroon (2009), Cabo Verde (2009), Mali (2010) and Rwanda (2011). Our measure of productivity is labor productivity, which is sales per worker in a regular month over the last year. We define firm size as the total number of employees at the firm in a normal month during the past calendar year.

In the sample, approximately 28 percent of firms have a single employee, 21 percent have 2 employees, 15.3 percent have 3 employees, 11.8 percent have 4 employees, and the remaining 23.9 percent have 5 to 25 employees. After accounting for various factors such as manager characteristics (education, experience, gender of the manager), the use of various physical assets as well as industry type and location, we find that the size of the firm is negatively correlated with labor productivity. This is shown visually below: 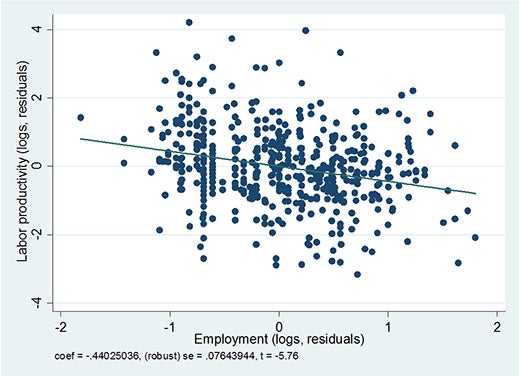 What could explain these results? Although we do not have a definite answer, we can provide a few conjectures. We posit that as an informal firm grows in size, they may face increasing costs that render them less productive. Informal firms may wish to remain unregistered to avoid excessive regulation and taxes. As informal firms grow in size, such costs - which we term as evasion costs - become larger as the informal firm becomes more visible. Increased visibility can make the firm a more visible target for the government, as the potential for tax revenues is even greater. Second, as a firm increases in size, it may wish to formalize. However this may come with extensive preparation, including formalization of processes, improved book keeping as well as general record keeping. There may be a rise in managerial time costs to deal with the substantial preparation work. We term these as transformation costs. Thus as informal firms grow, evasion and transformation costs may decrease their productivity. The presence of evasion costs is compatible with the situation where there is no continuum between informality and formality, while transformation costs would not rule out an informality-formality continuum, but suggest a temporary blip.

There are a few possible policy recommendations from these findings. On one hand, the findings may be consistent with the idea that expanding firm-size of informal firms through policy measures may not yield the desired result of improvement in labor productivity unless the expansion is accompanied by formalization. On the other hand, the informal sector can be viewed as an unregulated micro-entrepreneurial sector and not as a disadvantaged residual of segmented labor markets. Small informal firms that do not have any incentive to grow may see themselves as part of a voluntary small firm sector that has chosen the optimal degree of participation in formal institutions. In this case, formalization may not be a necessary course of action for small informal firms. There may be policy implications related to features of firm size. For instance it may be that as informal firms increase in size, the managerial tasks become more cumbersome thereby decreasing productivity. In this situation, providing managerial training for informal sector would be commendable policy. We hope that our study generates future interest in this important research area.
Regions
Africa