Eighty percent of the population in developing countries owns a mobile phone, but—according to the most recent report on the subject by the global association of mobile operators, GSMA—more than 1.7 billion women do not own one. Women are 14 percent less likely to own a mobile phone than men, on average. Women in South Asia are 38 percent less likely to own a phone than men.

The gender gap is particularly stark in the case of the internet. In Africa, for example, women are 50 percent less likely to use the internet than men (figure 1). In addition to ownership and access, lack of control over the use of the technology can be an additional barrier for women. A recent report by Intel and Dalberg reveals that in Egypt and in India, for example, 12 percent of women did not access the internet more often because they did not think it was appropriate, and more than 8 percent did not access it more often because family or friends would disapprove.

Figure 1 The Digital Divide—including by gender—remains wide, especially in internet use 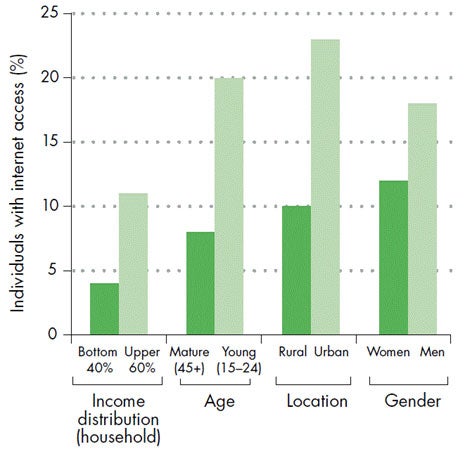 A missed opportunity: How digital technologies can promote gender equality

As discussed in the World Development Report 2016, digital technologies promise to bring many benefits—more democracy, more transparency, more economic growth, just to name a few. The promotion of gender equality is one of these promises—one that is achievable.

Digital technologies can reduce gender gaps in the world of work by making work arrangements more flexible, connecting women to work, and generating new opportunities in online work, e-commerce, and the sharing economy (see here, or here). On Elance, a platform for online work now part of Upwork, 44 percent of workers are women, compared to an average of 25 percent in the nonagricultural economy globally (figure 2). Business process outsourcing in India employs more than 3.1 million workers, 30 percent of them women. Four in 10 online shop owners on Alibaba, a Chinese trading platform, are women. 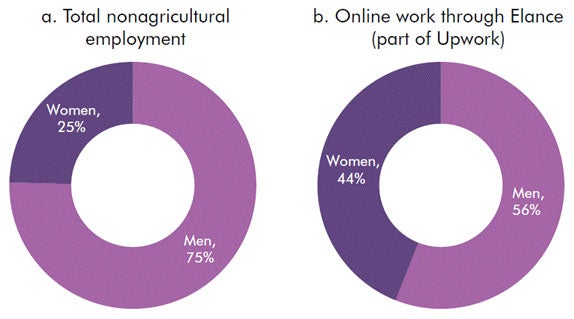 Moreover, technology can help improve women’s access to and accumulation of productive assets. The digitization of land registries, for example, can be particularly beneficial for women in rural areas. Mobile money and online learning can also be particularly beneficial for women in situations where physical mobility and lack of agency over resources are constraints. Since, as documented by the World Development Report 2012, social norms and time and mobility constraints are often more severe for women than for men, women could benefit greatly from better accessing technology-enabled services to increase productivity, especially in the informal sector.

Digital technologies can also foster gender equality in more organized labor markets and in more advanced settings. Globally, women are much less likely than men to work in the information and communications technology (ICT) sector or in ICT occupations, which are well paid. These gaps partly reflect women’s low participation in science, technology, engineering, and math (STEM) education, itself a product of early gender-based biases in formal and informal education. In OECD countries, at age 15, fewer than 5 percent of girls consider careers in engineering and technology, compared with 18 percent of boys.

More broadly, technology-driven shifts in skills demand can reduce wage gaps, especially among the better educated. Women are well positioned to gain from a shift in employment toward nonroutine occupations, and away from physical work. In Germany and the United States, the use of digital technologies at work explains a significant share of the increase in female labor force participation and employment in the last few decades. Similar changes have taken place in Brazil, Mexico, and Thailand, and also explain a large part of the reduction in gender wage gaps.

Digital technologies could also advance women’s voice and agency. The increased access to information that comes with digital technologies can affect gender norms and affect aspirations, as have other media. Social media, in particular, is an additional outlet for women to participate in public discussions and voice their opinions, as was the case of “My Dress, My Choice”, a social media movement against female violence that mobilized thousands of Kenyans, and eventually led to changes in relevant laws. Some of the innovations of the digital economy, such as mobile money, can also increase women’s agency and control over economic resources. For example, in Niger, greater privacy and control of mobile transfers, compared to manual cash transfers, shifted intrahousehold decision making in favor of women, the recipients of the transfer.

Alas, these opportunities are too often missed.

As in other areas analyzed in the World Development Report 2016, the digital agenda for gender equality requires solid analog foundations.

Even with gender parity in ownership, access, and control over digital technologies, gains are not automatic. Some of the most relevant constraints for the productive use of digital technologies, such as lack of functional literacy, are just as important for men as for women. But some barriers affect women disproportionately. In rural South Africa, for example, mobile phones increased employment more often among women than among men, but only when women did not have large child care responsibilities and could actually engage in gainful work outside the home.

And in cases where digital technologies circumvent, rather than eliminate, barriers to employability faced by women, the internet could actually delay necessary reforms. For example, home-based work could help connect women to work in environments where social norms or child care responsibilities are a barrier to women working outside the home. But if working outside the home continues to be seen as unacceptable for women or if affordable child care is unavailable, technology could end up delaying fundamental reforms. Addressing these underlying constraints remains key to the gender and overall economic agenda.
Topics
Gender
Digital Development
Countries
Djibouti
Somalia
Regions
Africa