Global inflation has been trending up over the last two years, but is still subdued despite a broad-based recovery in economic activity. The reasons for this include the lingering impact of the 2007-2009 financial crisis on price and wage formation in advanced economies, as well as downward pressures associated with rapid technological changes and foreign competition.

However, inflation dynamics could rapidly change in an environment in which global economic slack is dissipating and growth is expected to exceed potential in most countries this year and next. This raises the possibility of a sudden reassessment of inflation risks and monetary policy expectations that could lead to disruptive financial market developments.


Factors holding back inflation
Global inflation reached 2.4 percent in March, extending a gradual upward trend since a record low of 1.2 percent at the start of 2016. However, it remains below its long-term average (Figure 1). In advanced economies, inflation is picking up, particularly in the United States, where solid growth and tight labor market conditions have started to generate price pressures. However, nominal wage growth is considerably weaker than during previous recoveries, despite unemployment rates falling to pre-crisis lows (Figure 2).

In emerging market and developing economies, inflation has generally risen among commodity importers, but has declined in commodity exporters, as the effects of past currency depreciations wane and economic slack lingers.
Stubbornly weak global inflation could reflect a convergence of factors: 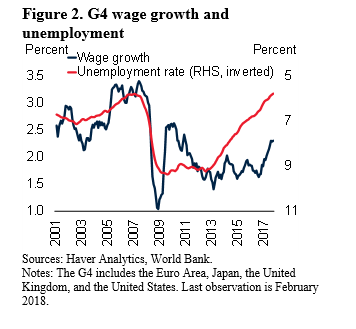 Factors pushing inflation up
While the forces keeping global inflation in check remain present, cyclical upward pressures are gathering strength. We estimate that 2018 will be the first year since the financial crisis where the global output gap will be closed, and expect that the global economy will operate above capacity after that (Figure 3). This could have profound implications for inflation dynamics, particularly of traded goods.

Moreover, a persistent period of low unemployment in advanced economies could reinforce workers’ bargaining power and lead to a sudden catch up of wage growth with previous recoveries. If not matched by similar increases in productivity growth, this could lead to a faster-than-expected pickup in current and future expected inflation. In the United States, this risk is further reinforced by policy changes, including significant fiscal stimulus measures and possible tariff increases. 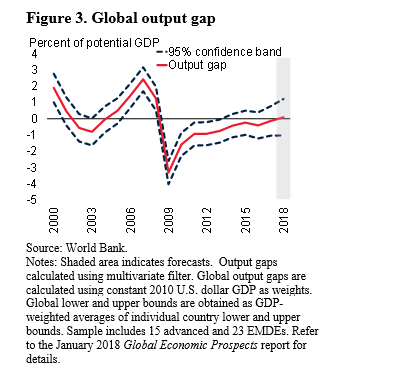 Inflation risks, debt and borrowing costs
Since financial markets assign low probability to a resurgence of inflation, an upward surprise could trigger a sudden shift in monetary policy expectations, upward pressure on long-term yields, and a disorderly tightening of global financing conditions.

Emerging market and developing economies remain vulnerable to rising borrowing costs and reversals of capital inflows that were spurred by a prolonged period of low interest rates. Both private and public debt levels are considerably higher than in the pre-crisis period, and refinancing needs are expected to escalate in coming years (Figure 4). These risks highlight the urgency to reduce vulnerabilities, rebuild policy buffers, and accelerate reforms. 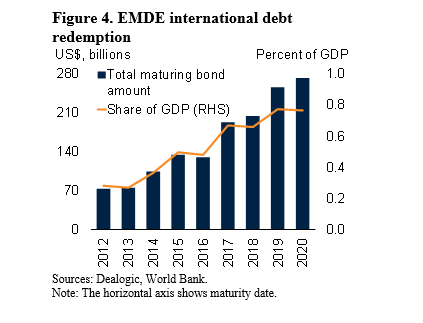