How can Latin America and the Caribbean keep up inclusive growth?

The Latin America and Caribbean (LAC) region has been the most inclusive region in the world over the last decade: not only did it cut extreme poverty in half, it also realized the highest income growth rate among the bottom 40 percent of income earners in absolute terms, as well as relative to the total population. Between 2006 and 2011, the average growth rate per year in the mean income of LAC’s bottom 40 was approximately 5.2%. Moreover, when compared with the rest of the world, the region’s bottom 40 enjoyed the most rapid income growth relative to the total population (Figure 1). 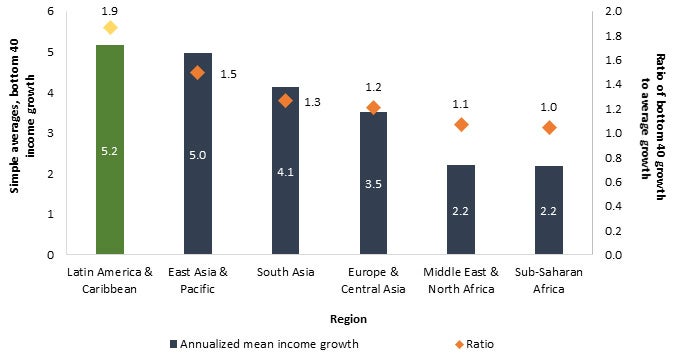 These gains have been nothing short of transformational. In 2012, more than one-third of the bottom 40 in the region was comprised of vulnerable households (those living on $4 to $10 a day). This is an improvement compared to 2003, when the bottom 40 was composed entirely of households living in moderate poverty (those living with less than $4 a day). Moreover, in 2012, more Latin Americans were living in the middle class than in moderate poverty, 34.4 versus 25.1%. The inclusive nature of LAC growth is also evident in the decline in notoriously high levels of inequality, as measured by the GINI coefficient, which dropped from 0.56 in 2003 to 0.52 in 2012.

While doing research for our recent book, we learned that dynamic human capital accumulation for the whole population, higher growth of wages for those in the bottom 40 and price stability, under conditions of a slight decline in labor force participation for those in the two bottom quintiles, have driven many of these social gains.

We also found that the countries that did best at inclusive growth adopted policies that enabled equitable, efficient, and sustainable fiscal policy and macroeconomic stability; fair and transparent institutions capable of delivering universal, good-quality basic services;  well-functioning markets; and  adequate risk management at the macro and household levels.

However, things vary significantly at the country level.

While Bolivia, Brazil, and Peru took advantage of high growth rates to reduce poverty and boost shared prosperity, Guatemala, Honduras and Mexico grappled with lackluster growth. There was also significant variation across countries in the relative importance of growth and redistribution for poverty reduction. In Colombia, moderate poverty reduction was driven mostly by economic growth, while in the Dominican Republic, El Salvador, and Nicaragua, redistribution was almost exclusively responsible for reducing extreme poverty. The sustainability of LAC’s social gains may be jeopardized by less positive prospects for economic growth and by stagnation in the pace of the reduction in income inequality (Cord et al. 2014; de la Torre et al. 2014).There are more variations. Labor markets in Brazil excelled at generating well-paying formal jobs that have done a lot to reduce poverty. On the other hand, in Colombia, fiscal policy has had a limited impact on inequality since the tax/transfer system is of limited progressivity (see Lustig and Meléndez, 2015). In Argentina, there are significant regional disparities in equitable access to services, especially to sanitation. Finally, in Mexico, despite significant progress in addressing the fiscal risks of natural disasters, the ability of households to cope with natural disasters remains limited.

If growth wanes and progress in reducing the region’s high levels of inequality, as measured by the GINI coefficient, slows, it will be more important than ever for governments to focus policies on inclusive growth (de la Torre et al. 2015). For example, understanding the drivers behind falling labor force participation rates among the bottom 40 will be critical to ensuring the inclusiveness of growth, especially in a lower growth context that limits labor market returns. In addition, LAC should also pay close attention to its limited fiscal space to increase tax collection, work to improve the access and quality of basic services and develop policies to protect vulnerable populations from shocks.

Lustig, Nora and Marcela Melendez. 2015. The Impact of Taxes and Transfers on Inequality and Poverty in Colombia. CEQ Working Paper No 24, Center for Inter-American Policy and Research and Department of Economics, Tulane University and Inter-American Dialogue. Forthcoming.
Topics
Poverty
Regions
Latin America & Caribbean I note that there are no references to other non Spanish/Portuguese speaking Caribbean countries in the abstract. I hope some information on growth or lack thereof is present in the book. Often times the non Spanish/Latin part of the region is under represented in these studies

Thanks for your interest in the book. A section of the overview chapter includes recent data on poverty, shared prosperity and labor market outcomes for St. Lucia and Haiti. You may find the full reports cited in the overview in the links below:https://openknowledge.worldbank.org/handle/10986/21602https://openknowl…

This study will help policymakers do a better job of building on the last decade's progress, promoting growth and incomes regardless of the global slowdown, and moving forward into an even more successful decade to come for the people of Latin America and the Caribbean. Each country will tackle its current challenges differently, but all will benefit from understanding how they achieved so much.