India’s chaotic and messy use of energy 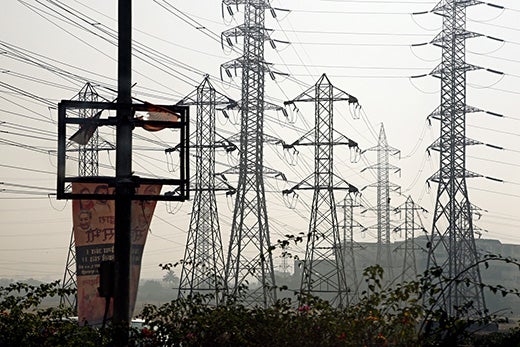 Globally, India ranks fourth in energy consumption, but it is not well endowed with energy resources. Being the second most populous country in the world, how India manages its industrialization and urbanization process will matter for national and global concerns about energy efficiency, pollution, and climate change. In a recent paper, we use enterprise data to look at the relationship between structural transformation, geography, and energy efficiency in India.

The geography of electricity usage

Organized manufacturing in India is moving out of urban areas while unorganized manufacturing is transitioning towards urban areas. The organized sector has located in rural sites along major transport corridors, like the Golden Quadrangle highway network. This has activated medium-density intermediate cities to be an important part of India’s manufacturing growth, an area where India has struggled. We examined these forces through the unique lens of energy usage at the enterprise level. Very little is known whether energy efficiency in India is higher or lower in urban or rural settings, leading or lagging regions, formal or informal enterprises, young or old enterprises, and in purchased energy or own-firm provision.

While we may instinctively rank order some of the dimensions of energy efficiency, the trends are hard to add up. For example, we might often suspect urban settings reduce the cost of electricity use per output level due to denser customer bases and more-efficient plant sizes for local energy producers, but the largest plants in India are moving towards rural locations, often provisioning some of their own energy, and building new plants in this process. We do not know how these forces add up, and whether urbanization and spatial transformations are improving or worsening energy efficiency.

Electricity consumption per unit of output in urban areas, in both organized and unorganized plants, has declined. In the rural areas, by contrast, electricity consumption per unit of output for organized sector plants peaked in 2000 and thereafter it declined. This result comes out even stronger during periods of high economic growth and energy price increases.

Beneath these aggregate trends lies much heterogeneity. The usage of electricity per unit output is remarkably high in states such as Madhya Pradesh and Orissa, and in some cases twice the level of India as a whole. By contrast, states like Delhi and Haryana display electricity consumption levels that are consistently lower than the national average. We find a strong link of lower electricity consumption levels per unit of output in more developed states, although the sorting of manufacturing plants over locations limits the strength of these conclusions.

The energy-intensive industries (e.g., iron and steel, fertilizer, petroleum refining, cement, aluminum, and pulp and paper) account for a bulk of the energy consumed in the sector. It has recorded greater energy efficiency improvement since the late 1980s. Many factors account for this trend, including greater competition, rising energy prices starting in the late 1990s, and the promotion of energy efficiency schemes. Nonetheless, various industries are inefficient by either national or international standards, and there is substantial potential for energy saving in energy intensive industries, ranging, for example, from 46%-88% for textiles, 43%-94% for paper and pulp, to 51%-92% for iron and steel.

How has India’s urbanization and spatial transformation impacted the aggregate energy consumption of the sector?  We find that most reductions in usage came from lower usage in existing sites of activity (defined through state-industry-urban/rural cells). The second biggest factor was the lower usage levels among fast-growing sectors. By contrast, spatial movements of manufacturing activity across India did not significantly reduce electricity consumption per unit of output and may have even increased it. This appears in part due to the split nature of the mobility, with organized and unorganized sectors migrating in opposite directions.

Given multiple challenges in India’s energy sector, and limited resources, a better understanding of the spatial patterns of energy usage can help in defining a more focused and targeted energy policy. For instance, our work suggests that organized sector is moving to rural regions, and they utilize self-generation of electricity at least in part. For India, effective policy may need to extend beyond urban regions and also consider the incentives and regulations that govern self-production of electricity.

Usage is an important component of efficiency, and, all else being equal, using less electricity to achieve a given level of output is more efficient and positive. But, for many reasons, we should not label every increase in electricity cost per unit of output as a bad thing. In a context where electricity supply is often incomplete and uncertain, efficiency can involve increased usage levels as it unlocks better production techniques (e.g., uses less labor and greater mechanization). Indeed, access to reliable energy supply is fundamental for economic development.

India is still home to about 263 million people who lack access to electricity, more than 20% of the worldwide total of 1.1 billion people without electricity. Although the current installed capacity of India’s power system is the fifth-largest system in the world after China, the United States, Japan, and Russia, it is nonetheless insufficient to meet India’s demand. The deficit continues to remain at around 10% of the energy need. Electricity consumption in India is only around 566 KWh per capita, compared to the world average of 2,782 KWh per capita. Electricity shortages are frequent in India and are estimated to cost the country around 7% of GDP. Since electricity is an essential input in production, it is natural that about 35% of plants in Indian manufacturing insure themselves against outages by self-generating or otherwise substituting away from grid electricity.

The situation is similar in many other developing countries in Africa, where unreliable energy supply forces firms to invest in self-generation capacity at the expense of more productive capital, outsource part of the production process, or expand firm size. Energy policy presumably helps to make energy available wherever needed at a reasonable price. Energy policy presumably also encourages use of local sources and renewable sources. India is well endowed with energy sources such as muscular power (human and animal), coal, hydro, solar and nuclear. What is lacks is oil.
India's energy policy and industrial policy need not necessarily encourage automation over human labor - in a country with enough people, encouraging manual labor is critical. In fact senseless automation, in an effort to become globally competitive is a self defeating exercise - surely the only entities which make money through automation are the machine manufacturing entities which are overwhelmingly in the developed world. The machine users in the developing world, meanwhile, mutually race to the bottom.
India needs to build on its strenghts in the area of energy which are mentioned above - and policy needs to recognize that. India need not pursue per capita energy consumption levels prevailing elsewhere - what it needs is installing enough to meet demand reliably. And the gap seems to be small. Energy efficiency is definitely needed and effort needs to be made- but that is a mix of energy and industrial policy and human habits.

According to the Central Electricity Authority (CEA), India’s apex power sector planning body, the country’s per capita electricity consumption has reached 1010 kilowatt-hour (kWh) in 2014-15, compared with 957 kWh in 2013-14 and 914.41 kWh in 2012-13.
Over the years there has been a significant shift in the sector-wise consumption patterns, as there has been a decrease in the share of agriculture and industrial sectors and an increase in the share of the domestic and commercial sectors. In FY90, the industrial consumers accounted for 46.0% of total sales by utilities, while the domestic and agriculture sectors accounted for 16.9% and 25.1%, respectively. The industrial segment’s share in overall consumption has come down due to improved consumption norms after adoption of energy-efficient technologies, and also due to the industrial sector’s use of captive power. The domestic segment has overtaken the agriculture sector and has emerged as the second-largest consumer segment of power largely due to increased urbanisation, rise in disposable incomes, and the consequent increase in use of domestic electrical appliances. Consumption of power by commercial establishments has increased with the rise in the service sector in India.
To quote the Planning Commission “Contrary to other developed and developing countries, total primary commercial energy requirement in India has been falling with respect to the growth in GDP largely because higher energy prices have led to its efficient use. The elasticity for per capita primary commercial energy supply with respect to per capita GDP (i.e. percent increase in per capita energy consumption for one percent increase in per capita GDP) estimated from the time series data of India over 1990-91 to 2003-04 comes to 0.82 which is significantly lower than 1.08 estimated for the period since 1980-81. Similarly the elasticity for per capita electricity generation is only 1.06 for the period from 1990-91 to 2003-04 compared to 1.30 for the period since 1980-81. However, the energy elasticity of GDP growth in India may not fall as much in the future as rising income levels will foster life style changes that are more energy intense”.
However, one of the limitations is that India is not well endowed with conventional energy resources like oil gas or uranium.Coal is abundant but regionally concentrated and of low calorie and high ash content,
India's electricity consumption is expected to rise to around 2,280 BkWh by 2021-22 and 4,500 BkWh (billion kilowatt hours) by 2031-32, according to Forest College and Research Institute

Electricity is prime mover of development. No society, however isolated it may be, can think of taking developmental strides without electricity in today's time but it’s a stark reality that more than 80% villages and 50% cities in India get electricity supply for less than 12 hours a day.
Another main feature which escapes attention of most of policy makers in India is quality of power.
Quality of power meant for industrial purposes are measured by two parameters. One is voltage (which every average urban Indian complains about) and other is frequency. Frequency (measured in Hz) is intricately linked with the total load on the grid. People who are involved in grid control knows that supplying electricity on grid in India is like tug of war for every single moment as there is huge latent demand because of scarcity.
However, with recent technological improvements in grid control, we have been able to have better control over frequency yet the same is far below the accepted standards of developed countries. Too much frequency and voltage variations have adverse impact on power generating and power consuming industries which have got sophisticated instruments and machineries thereby increasing maintenance cost of machineries, electrical and electronic equipment .Further productivity and quality suffers. Thus Indian industry not only faces uncertain supply but also poor quality electricity supply. So many industries resort to power backup or small oil based captive power plants. Such solutions raises cost of production. Besides, it has negative impact on the environment.
Thus while dealing with electricity woes in India, Indian policy makers need to address four headed monster i.e. short supply, poor quality supply, high