Large scale mining in Africa is a mixed blessing for women

The African continent is rich in natural resources, like oil, gas and minerals that contribute to a large share of exports, and are now a major source of foreign direct investment. In our paper African Mining, Gender and Local Employment, we investigate how this recent, rapid expansion in large-scale mining affects women’s job prospects.

According to previous research and policy documents, it is ambiguous whether industrial mining increases or decreases female employment. The “African Mining Vision” spells out the risk that extractive industries might make gender disparities in economic opportunities larger. The sector is generally known for weak local multipliers, i.e., for each job created in the sector, too few jobs are created in auxiliary sectors, such as services, manufacturing or construction. This is known as the ‘enclave’ hypothesis: that a large-scale mine generates few economic opportunities for local community members. On the other hand, mining activities may generate jobs in services and sales, which are relatively female dominated in the region and which are locally traded.

To explore the effects, we connect production data on more than 800 industrial mines active between 1975 and 2010 to DHS household survey data for women aged 15 – 49, spanning over two decades using spatial information (see Figure 1). The unique combination of datasets with more than 500,000 sampled women and almost 300,000 partners in 29 countries enables us to investigate local spillover effects on employment by a difference-in-difference method.

We find that industrial mines generate local structural shifts. Subsistence farming becomes less important for both men and women. However, the effects are clearly pointing toward gender segregation. Men shift to skilled manual labor, and women shift to service sector jobs. Importantly, there are additional benefits to these new jobs for women: women are more likely to earn cash for work, instead of not being paid or earning in kind, and they have more opportunities to work all year around or occasionally, instead of only working during the agricultural high season.

Despite these gains in non-farm employment and cash earning opportunities, we see that mining may also hinder women’s labor market participation, and the overall effect on women’s employment is negative. Women in mining communities work less compared with women elsewhere, and the drop in employment is higher than for men. A back-of-the-envelope calculation produces the estimate that 90,000 women across Africa benefit from service sector jobs as a direct result of industrial mining in their communities, but at the same time 280,000 women leave the labor force. 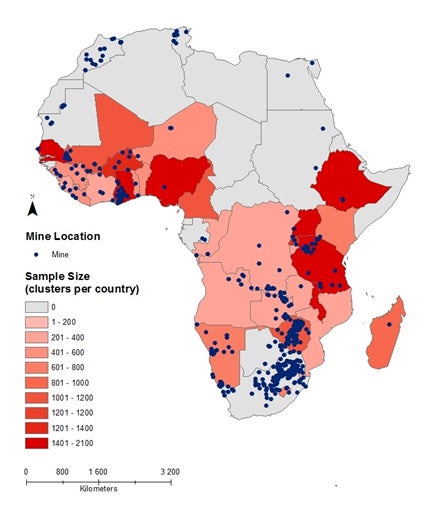 Figure 1: All African industrial mines in production between 1975 and 2010, and Demographic and Health Survey (DHS) clusters per country. (Image: Author’s own)

The results stand up to a wide battery of robustness checks, such as the use of different definitions of the control group and excluding people who have migrated to their current place of residence. Further evidence using exogenous changes in world prices of minerals shows that the effects are stronger in boom times, and that the labor market effects are temporary and disappear when mines close as the newly stimulated sectors, services and demand for manual labor contract again. The effects are highly spatially concentrated: Individuals living further away than 50km from a mine are not affected by it.

The findings highlight that large scale mines have the transformative power to generate new economic opportunities for both women and men. However, the findings also point toward challenges that have to be addressed to ensure that the industry generates fully inclusive and sustainable local economic growth.

Be sure to read the 2012 World Development Report, which argues that access to employment improves women’s lives, and is among the top five priorities for promoting gender equality. Thank you for a great and very informative read! Extractive industries open up considerable employment opportunities for women, however as the article highlights, it also stands pertinent to investigate the fine print and dynamics of these opportunities for women which are being provided.
I consider it very interesting that even though large scale mines bring about substantial economic opportunities for both genders, inequality in the types of jobs which are undertaken by women and men still exists, in addition to a noticeable disparity in the amount of women benefiting from service sector jobs as a direct result of industrial mining and the amount of women leaving the work force simultaneously.
Certainly, the need for fully inclusive and viable economic growth in the mining industry is imperative.

Large scale mines are typically international, there fore know that women work well in all areas of mining. Is it just the local culture that holds women back, or the company itself. Is there something the government and company can do to bring equality to the employment of women in the mining industry?

Dear Darlene,
Thank you for this interesting comment. It's true as you say that a large share of this sector is international. Policies and encouragements aiming to increase women's participation in mining could therefor be done at a global scale. One interesting attempt is The World Bank Gender and Extractive Industries Initiative, which works toward increased employment of women by the mining companies. Of course local constraints should also be assessed, such as norms and attitudes as well as training.
Best wishes,
Anja