Left unattended, 5.3 million of Bangladesh’s poor will be vulnerable to the effects of climate change in 2050

Currently around 43.2 million people or 30% of the population of Bangladesh live in poverty. Alarmingly, this figure includes 24.4 million extremely poor who are not even able to meet the basic needs of food expenditure. These numbers will be even higher if we do not address climate change. Preparation for climate change is essential for poverty alleviation to be sustainable.

In densely populated and land scarce Bangladesh, poor households are disadvantaged with regards to land access, and many end up settling in low-lying regions close to the coast. The poverty map developed by the Bangladesh Bureau of Statistics, World Food Program and the World Bank identifies a high incidence of poverty near the coast, where 11.8 million poor are located in 19 coastal districts in 2010.

Areas close to the sea already are prone to tidal surges and cyclones. Soil and water are saline at certain times of the year, and living conditions in these areas are harsh. In order to make ends meet, working-age (mostly male) family members frequently migrate from households in coastal areas. Family members left behind live on their remittances and face a greater likelihood of extreme poverty.

Vulnerability of coastal regions to flooding, storm surges and salinity will further increase in this century, according to the climate projections of the Intergovernmental Panel on Climate Change and the World Meteorological Organization.  Climate change thus poses a serious threat to the livelihoods of the poor in coastal areas of Bangladesh – especially because the poor in these areas have limited mobility due to their economic circumstances and disadvantages with land access.

To understand the implications of climate change for the poor in coastal Bangladesh, Brian Blankespoor and I worked with experts from the Institute of Water Modeling in Bangladesh to integrate information on climate change, hydrodynamic models, and poverty maps in order to assess the vulnerability of coastal areas to sea-level rise, larger cyclonic storm surges and increased salinity by 2050. Our analysis was conducted in three steps.


The case of cyclones:

To simulate cyclonic storm surges in a changed climate by 2050, we considered a sea-level rise of 27 centimeters, increased wind speed of 10 percent, and landfall during high tide. Our estimates indicate that with these climate changes, the total number of people at risk will increase by 9%, but the number of poor people at risk will rise by 22%.

Our estimates further indicate that the vulnerable area in coastal Bangladesh with more than 3 meters of inundation depth is likely to increase by 69% under our assumed climate changes. As a result, while 2 million poor people in coastal Bangladesh are currently exposed to risk of inundation depths greater than 3 meters resulting from cyclonic storm surges, the number of coastal poor vulnerable to this level of inundation in 2050 would increase by 60%, to 3.2 million. 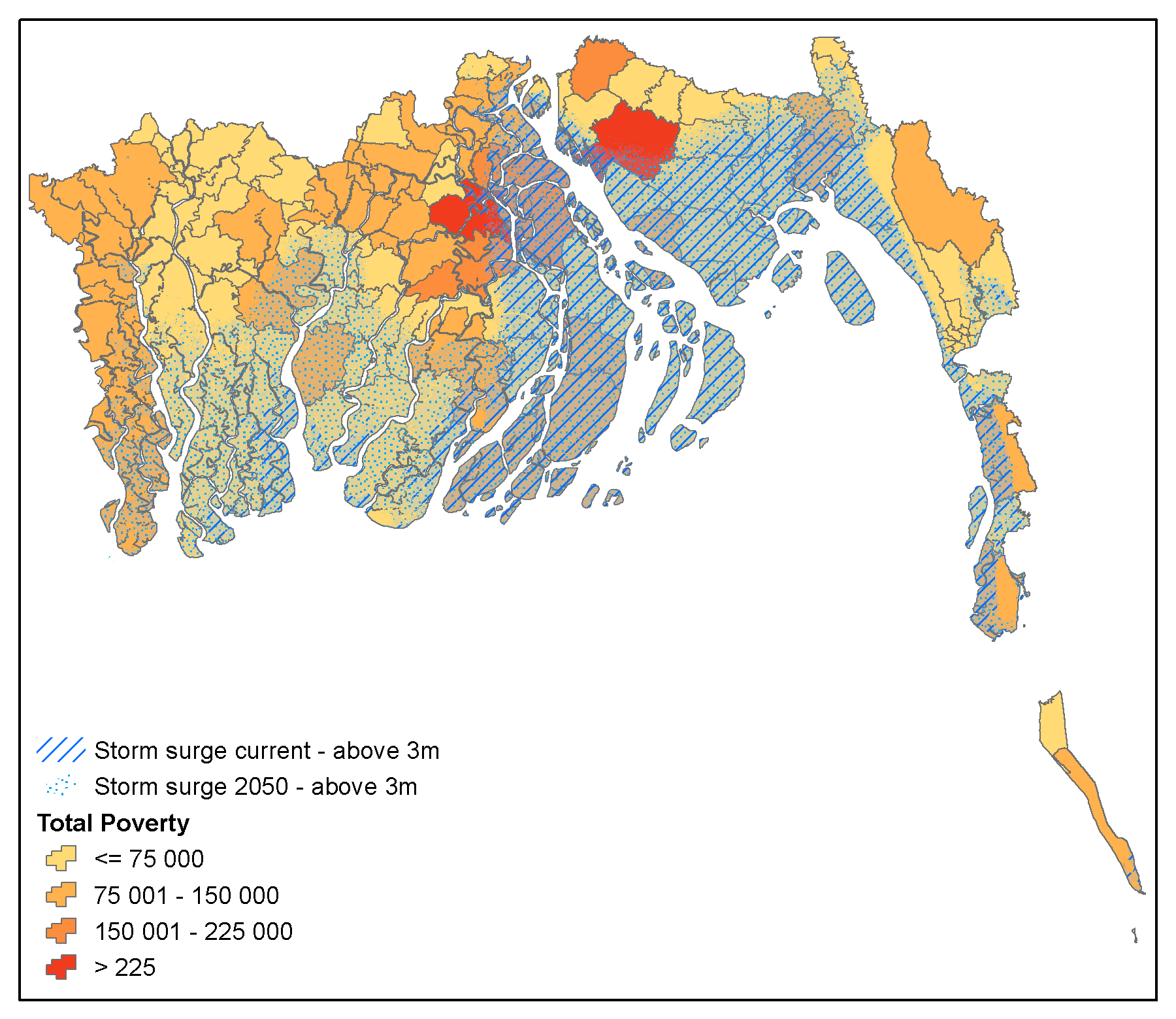 The case of salinity:

For assessing vulnerability of coastal Bangladesh to salinity intrusion, our focus was on the southwest coastal region where 2.5 million poor (including 1.4 million extreme poor) are already suffering from shortage of drinking water, scarcity of water for irrigation for dry-season agriculture, and significant changes in the coastal aquatic ecosystems. We analyzed the spread and increasing intensity of salinization of river water by 2050 for alternative scenarios of climate change and projections of subsidence of the Gangetic delta. 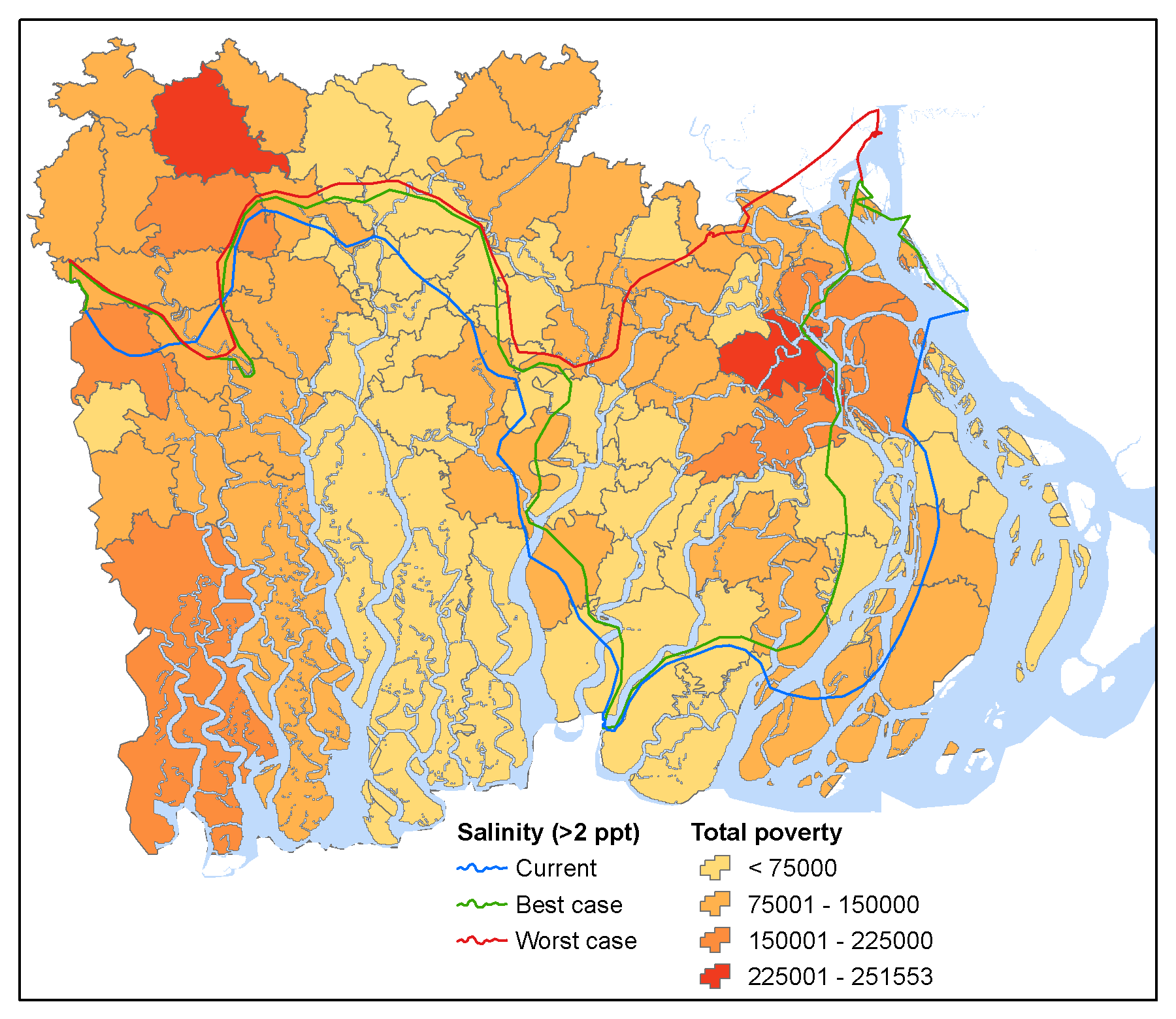 Urgent call of action for policymakers and development partners

Our results paint a bleak picture of the risks for poor households in coastal Bangladesh exposed to climate change. Poor households in coastal Bangladesh are already on the “front line” of climate change. These families will be threatened by more intense cyclones, and an increase in salinity will pose a major threat to their livelihoods in the coming decades. The threats would persist well beyond 2050, even with cuts in greenhouse gas emissions today.

For sustainable poverty alleviation, it is imperative for policymakers to begin planning to cope with the potential poverty trap that climate change may create in coastal Bangladesh. Implementation of new policies takes time. Therefore, the time is now for the government of Bangladesh and its development partners to prepare and implement policies that reduce vulnerability to climate change.

If you’re interested in the research on livelihood threats in coastal Bangladesh in a changing climate, please see
at  http://documents.worldbank.org/curated/en/2014/12/23130405/facing-hungry-tide-climate-change-livelihood-threats-household-responses-coastal-bangladesh

For more on salinity and cyclones in a changing climate, visit http://documents.worldbank.org/curated/en/2014/03/19299368/river-salinity-climate-change-evidence-coastal-bangladesh and http://www.tandfonline.com/doi/full/10.1080/17565529.2013.868335#abstract
Topics
Climate Change
Environment
Countries
Bangladesh