Microfinance institutions aim to serve customers ill-served by traditional commercial banks and thus the associated business model is challenging by definition. And yet the industry has achieved impressive scale reaching 211  million customers globally in 2013. Paradoxically, recent evidence suggests that the benefits of microcredit to borrowers may be modest. For example, six prominent randomized controlled trials found small impacts of access to microcredit on the incomes and consumption levels of marginal borrowers, though the studies found some “potentially important” (though modest) impacts on “occupational choice, business scale, consumption choice, female decision power, and improved risk management.” (Banerjee et al., 2015, p. 14).

Even if one takes those modest benefits at face value, it would be wrong to consider the microfinance business model a failure without paying greater attention to the costs incurred to achieve those benefits. Modest benefits to borrowers could nonetheless feed into sizable benefit-cost ratios if the costs are also proportionally small. Indeed, this was a fundamental premise of microfinance. 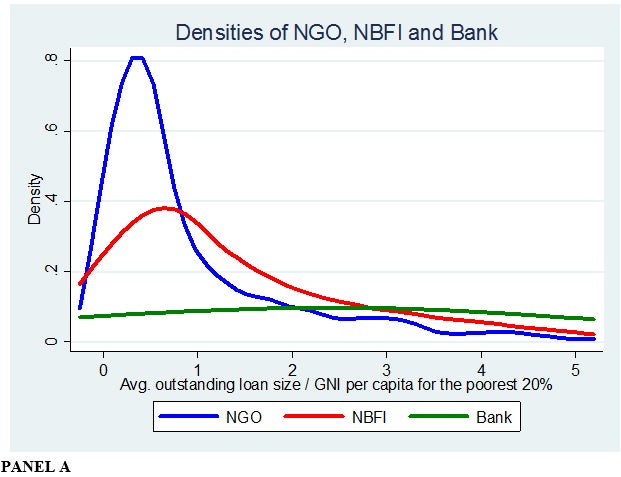 But are those higher interest rates enough to cover the costs of reaching harder-to-serve clients? In an accounting sense (i.e., whether revenues covers costs), the answer appears to be yes for the majority of institutions in our sample. However, once we take account of the opportunity costs of the capital received by those institutions, a much smaller share of them is profitable in an economic sense. When we use the local prime interest rate as the opportunity cost of capital, only about one-third of the institutions are economically profitable. 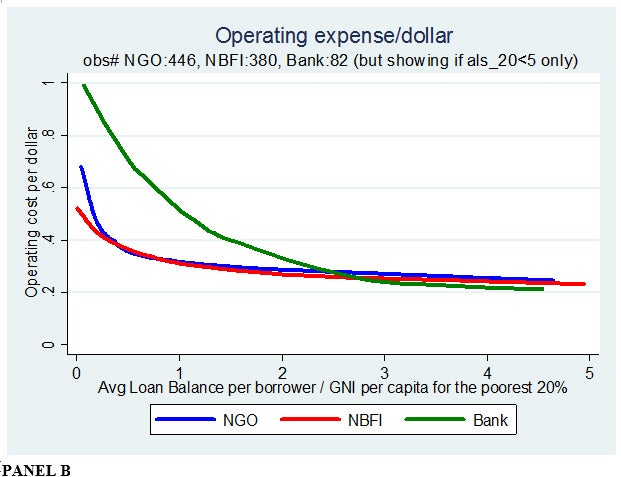 Panels B and C show relationships from bi-variate lowess regressions between average loan size (normalized by the per capita income at the 20th percentile in a country), operating costs per dollar lent, and real yields on gross loan portfolios (our proxy for interest rates charged on loans). Data points for individual microfinance institutions are suppressed to reduce clutter.
______________________ 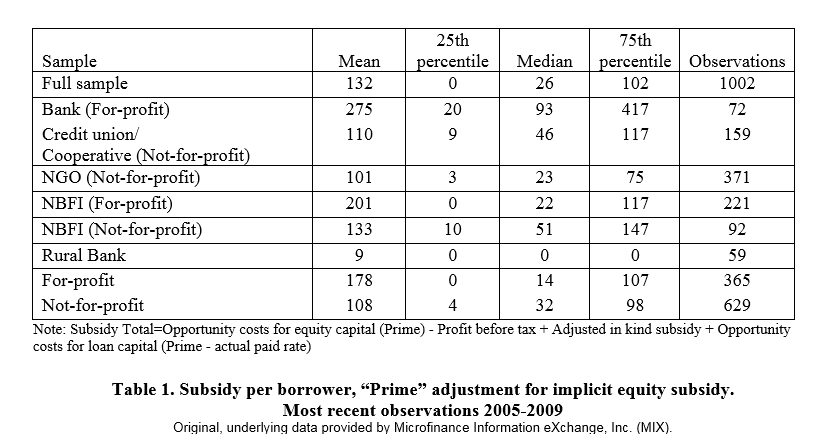 Figure 2 shows how the data on subsidy per unit lent lines up with the gender-orientation of institutions. The relationship for NGOs is flat. For NBFIs, however, the largest subsidy per unit goes to institutions that tend to favor men. The curve for banks draws on a small sample (n=46) but shows a generally pro-female orientation of subsidy. However, when we control for additional features of the institutions (age, size, region, cost structure, loan pricing) using regression models, none of the MFI types show a robust positive link between lending to women and subsidy per borrower. In addition, the paper provides evidence that dependence on subsidies declines but does not disappear as institutions become older, and in fact many older institutions continue to rely upon substantial subsidies.

By tilting away from those who may be able to benefit most from subsidies (poorer customers and women), microfinance subsidies support institutions that may not be the most worthy of them, at least from the vantage of traditional social analysis. And the finding that per-borrower subsidies are relatively small for parts of the NGO sector more focused on women and those making smaller loans, reinforces the call for cost-benefit analyses to place pessimistic conclusions drawn from recent impact studies in a fuller context. Finally, because our calculations indicate that subsidy remains an important element of the current microfinance business model, they also underline the importance of pursuing new ways to change the cost structure faced by most microfinance institutions such as digital payments and mobile money.