Intensifying natural hazards due to climate change are forcing countries to step up action in adapting to climate risks. In response to rising losses and damages, countries are committing to comprehensive adaptation and resilience strategies. Yet, tracking countries’ success in adaptation has proven difficult.

In a new working paper, we document a divergence in countries’ exposure to climatic hazards. We show that rather than adapting their exposure, many countries are instead rapidly increasing their exposure to flood hazards. Since 1985 communities around the world – from rural villages to large cities – have been continuously and rapidly expanding into flood zones . Driven by their rapidly growing economies and urban centers, settlement growth in high-risk zones is outpacing growth in safe areas by a large margin.

In other words, rather than reducing risks, current urban development patterns are contributing to aggravating these risks . 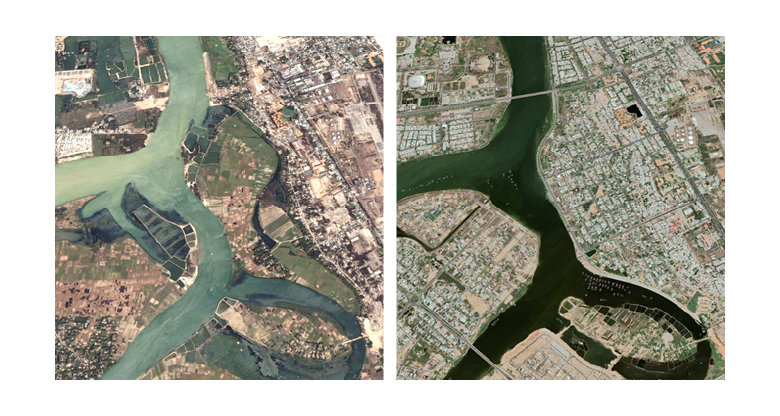 As cities grow, so do risks

Around the world, cities are expanding rapidly, both in terms of population and footprint. Urbanization and economic development have traditionally gone hand in hand as cities foster ideas, skills, and economies of scale. However, on the downside, rapid urban growth can cause congestion effects; for instance, by increasing exposure to natural hazards and pressure on public services and infrastructure.

This is particularly relevant for cities that lack the capacity for risk-informed urban planning and the financial resources to invest in transport and protection infrastructure. And as safe spaces in urban areas become increasingly occupied and land becomes scarce, new developments are built disproportionally on previously avoided areas such as riverbeds, flood plains, or wetlands . Our study offers a systematic and global analysis of spatial urbanization patterns and their evolving exposure to 1-in-100 year flood hazards. It uses high-resolution global flood hazard maps by Fathom and JRC, as well as the World Settlement Footprint Evolution (WSF-Evo) data set, which offers high precision measurements of human settlements from 1985 to 2015 at 30 by 30 meters spatial resolution and with global coverage.

These data allow us to track the speed and shape of urban expansion and estimate flood exposure with high precision. This offers new insights for understanding what share of countries’ built-up land is exposed to high flood hazards and how this evolves over time.

The insights are best summarized in numbers:

It can be politically convenient to see climate change as an exogenous force that places disasters beyond the influence of local authorities. However, locally determined patterns of urbanization and spatial development are key factors to people’s exposure and vulnerability to climatic shocks.

In an age of increasing disaster losses due to flood events, effective flood risk mitigation efforts must be based on a robust understanding of the different contributing factors to flood risk . These can include intensifying hazards (e.g., due to climate change), increasing exposure to hazards (due to expanding at-risk settlements), and rising vulnerability to shocks (e.g., due to inadequate building standards or social protection systems). Using data with high spatio-temporal resolution, our study shows that rising exposure to flood hazards is key to understanding the global rise in flood disaster losses.

These findings have concrete implications for urban planners and policymakers. In areas, where flood exposure is already high, investments in disaster preparedness and protection are crucial to mitigate losses (early warning systems, social protection, and protective infrastructure, for example). In areas where flood exposure is still low but rapidly increasing, revision of land use and urbanization plans are urgent priorities to avoid the highest-risk areas. While land scarcity and geographic constraints can mean that flood zones cannot always be avoided, careful planning of flood protection systems and disaster preparedness measures can support resilient socio-economic development .