Is poverty absolute or relative? When we think of (one-dimensional) income poverty, should we define the threshold that separates the poor from the non-poor as the cost of purchasing a fixed basket of goods and services that allows people to meet their basic needs?  Or should we instead think of it as relative deprivation: as earning or consuming less than some given proportion of the country’s average living standard?

This is an old debate, and international institutions have made different choices. Whereas the European Union (through Eurostat) and the OECD typically rely on relative poverty lines – set at 50% or 60% of national median incomes – the World Bank has traditionally used an absolute poverty line, currently set at $1.90 per person per day, in 2011 PPP dollars. The World Bank’s motivation was to measure poverty across countries in a welfare-consistent way: We wanted the International Poverty Line (IPL) to correspond, as far as possible, to the same level of welfare, regardless of the country the individual lived in. PPP exchange rates were used to try to account for differences in the cost of living across countries, and the intention was that a line thus adjusted would capture the same levels of well-being, in a way that using half the median income in, say, Madagascar and the Czech Republic, never could. The specific value of the international poverty line was, by design, anchored on the poverty thresholds used by some of the world’s poorest countries (see Ravallion, Datt and van de Walle).

As global poverty counts attracted greater attention in countries that were less poor, however, the (intentional) frugality of the line was sometimes criticized.  After the first Millennium Development Goal, the first of the World Bank’s Goals and, most recently, the first Sustainable Development Goal were all expressed in terms of reducing the number of people living on less than this International Poverty Line, analysts in middle-income countries also started paying attention to the IPL. And many found it difficult to equate the concept of poverty – even extreme poverty – in their countries with a $1.90 line.

The reason, we think, was suggested by Amartya Sen almost forty years ago. Sen argued that there was -and should be - an “irreducible absolutist core in the idea of poverty”, but that absoluteness lie in the space of capabilities: of the actions, beings and doings people were capable of performing and enjoying.  And it was possible – indeed, likely – that the same set of capabilities might require different baskets of goods and services in different countries (or at different times). The ability to stay warm might require different goods in the Central African Republic and in Poland. The goods and services required to effectively look for a job in a village in Uttar Pradesh and in Mexico City may well be different. A poverty line that is absolute in the space of capabilities may very well turn out to be relative in the space of commodities (and thus incomes).

This notion appears to be borne out, empirically, by the very same set of national poverty lines on which the World Bank’s researchers anchored our IPL. Figure 1 shows that when national lines are plotted against any measure of average national living standards - such as a measure of Household Final Consumption Expenditure from the national accounts, or GNI per capita – the scatter plot clearly slopes upward.  This remains true even if richer countries, whose lines are often explicitly relative, are excluded from the sample. In other words: when left to their own devices, even countries that follow an absolute approach to setting poverty lines seem to find that the cost of escaping poverty rises with average incomes. 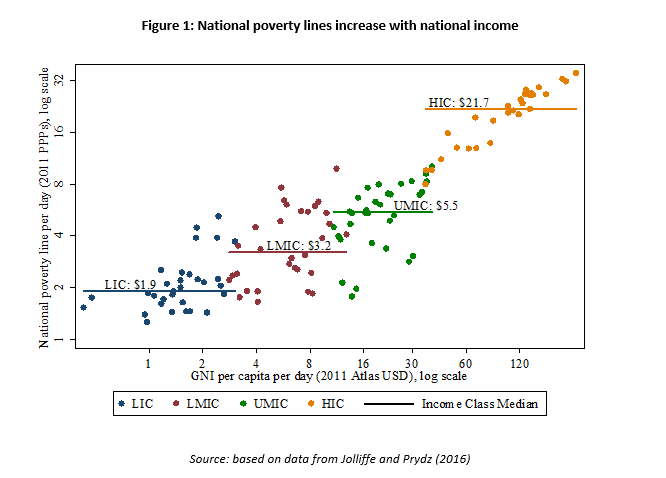 This observation can lead in two directions. One is to construct an alternative – possibly upper-bound – international poverty line, whose value would vary across countries in a systematic way. This was indeed proposed by Tony Atkinson and François Bourguignon in 2000 (pre-publication version available here), and has since been taken up by Martin Ravallion and Shaohua Chen here (among other places) and by Dean Jolliffe and Espen Prydz here. In response to Recommendation 16 in the Report of the Commission on Global Poverty, the World Bank will start reporting such an alternative global poverty count, with respect to a societal international poverty line, at the next update of the global poverty numbers, due in October 2018.

The second direction is even simpler: one could partition the world’s countries into different income groups – say, using the World Bank’s own income classification of low income; lower middle income; upper middle income; and high income – and then choose a poverty line that is typical of each of those groups, in the same way that the $1.90 line is typical of the poorest countries. Such lines would still be absolute poverty lines, just higher in value and potentially more relevant for middle- and high-income  countries.

This is precisely what Jolliffe and Prydz do in a different paper, published last year. They first construct a new and enhanced dataset of comparable national poverty lines, combining the poverty rates reported to the World Development Indicators by individual countries with the income and consumption distributions in PovcalNet. From the 864 lines they have for all years, they then focus on the 115 national lines that are closest to the 2011 PPP reference period.  These are the lines shown in Figure 1 above.

Starting this month, the World Bank will report poverty rates for all countries using two new international poverty lines: a lower middle-income International Poverty Line, set at $3.20/day; and an upper middle-income International Poverty Line, set at $5.50/day. This will be in addition to the $1.90 International Poverty Line – which remains our headline poverty threshold, and continues to define the Bank’s goal of ending global extreme poverty by 2030. These two lines correspond to the red and green horizontal line segments superimposed on the scatter plot in Figure 1 and will replace the higher “regional” lines previously reported for some regions (such as Europe and Central Asia and Latin America and the Caribbean) in certain World Bank documents.

The use of these lines serves two purposes. As explained above it accounts, in a simple manner, for the fact that achieving the same set of capabilities may require a different set of goods and services in different countries—and, specifically, a costlier set in richer countries. In addition, it allows for cross-country comparisons and benchmarking both within and across developing regions, something that a growing number of countries is interested in and was not possible before, using regional lines. Information on country and regional level poverty rates using the $1.90, $3.20 and $5.50 international poverty lines can be found in PovcalNet and the newly-revamped Poverty and Equity Data Portal as of today.

Let us be completely clear: The World Bank’s headline threshold to define extreme global poverty is unchanged, at $1.90/day. The Bank’s goal of ending poverty by 2030, and the United Nations Sustainable Development Goal 1.1, are both set with respect to this line. However - as Amartya Sen noted early on, and the Atkinson Commission reminded us – poverty is not a uniquely defined concept. There is an inevitable element of arbitrariness in choosing any poverty line, no matter how carefully it is constructed. As early as 1987, Tony Atkinson wrote that “there is likely to be a diversity of judgments affecting all aspects of measuring poverty and […] we should recognize this explicitly in the procedures we adopt.” 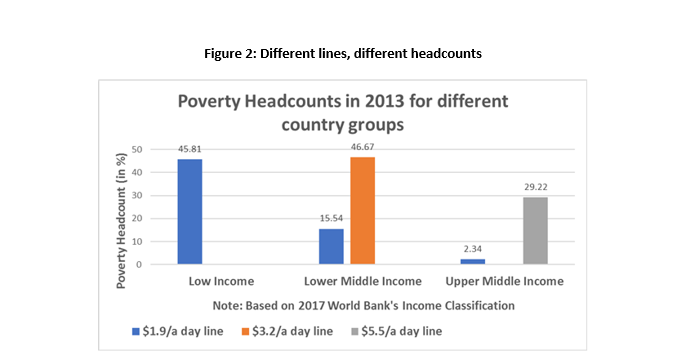 So, to recognize that absolute poverty in terms of capabilities may well imply poverty that is (weakly) relative in the space of incomes, users of World Bank poverty data will now have access to these two additional poverty lines, designed with lower and upper middle income countries in mind, and obtained as described above.

In twelve months’ time, when the next global poverty update is due, these will be complemented by a full societal IPL, among other innovations. Increasingly, we aim to combine our faith in the enduring usefulness of the International Poverty Line, originally developed by Ravallion and others as the “dollar a day” line, with the recognition of the wisdom of Atkinson’s ‘diversity of judgements’ approach. The $1.90/day line remains the signature dish, but global poverty monitoring by the World Bank now features a somewhat expanded menu.