Time and again, we witness how natural disasters reinforce poverty and other development challenges. Disasters strike countries around the world with alarming frequency – including severe storms, floods, or earthquakes that cause devastating damages. What is often overlooked in the reporting are the severe and long-term impacts that these events can have on the livelihoods and well-being of people. In the aftermath of these events, affected households—especially the poor and vulnerable—are often forced to cut down on food, education, or healthcare expenditures, or even to liquidate what’s left of their assets. These negative coping strategies often carry consequences long after the winds and storm surges have passed, and this is particularly true for children. 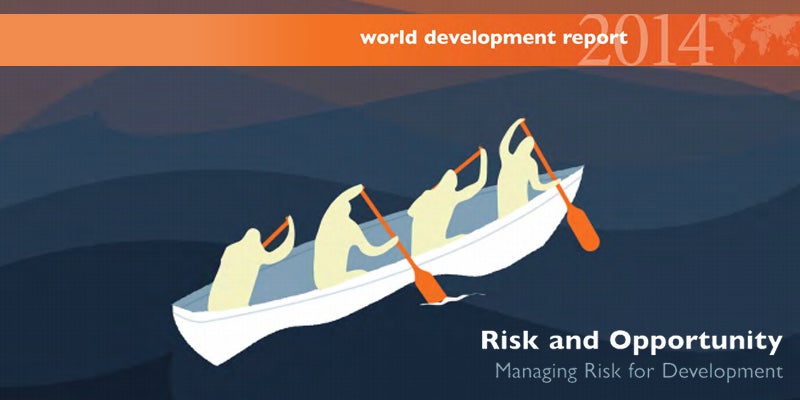 Before resorting to negative coping strategies, households at all income levels utilize a range of tools to maximize their chances of a speedy recovery from unexpected shocks. They draw on their own means and, when necessary (and available), the resources of their local community and government, or humanitarian aid. For poor households, these systems include community-based savings, credit, and insurance collectives, paralleling the more formal financial tools available to wealthier households. Wherever these systems are available, they have proven to be highly effective at helping households to cope and recover.

Five years ago, the World Development Report (WDR 2014), titled Risk and Opportunity: Managing Risk for Development, was dedicated to the support systems that serve as people’s risk management tools. The report detailed the roles and functioning of these interlinked systems, and identified opportunities for local leaders, national governments, and multilateral development institutions to bolster them.

At the Global Facility for Disaster Reduction & Recovery (GFDRR), we have worked to incorporate these systems into the way we understand, measure, and invest in disaster resilience. The Unbreakable report, published in 2017, launched this effort. The chief innovation was the concept of socio-economic resilience to disasters, which improves the measurement of disaster impacts by moving beyond aggregated asset losses (the traditional metric of disaster impacts) to quantify the impact on consumption and well-being at the household level.

This lens reveals the disproportionate impacts of natural disasters on poor households: on average the poorest 20% of the population incur only 11% of the asset losses associated with disasters globally, but 47% of the well-being losses. This is in large part because they lack access to the most effective support systems, including social safety nets, savings accounts, and insurance. The Unbreakable report applied this methodology to measure socioeconomic resilience to disasters in 117 countries, and to compare the benefits of investing in support systems vis-a-vis other, traditional disaster risk management (DRM) interventions including retrofitting and land use planning.

This initial work was followed up by the 2018 report Building Back Better: Achieving Resilience through Stronger, Faster, and More Inclusive Post-Disaster Reconstruction. This report updated the initial Unbreakable results to include 149 countries, paying particular attention to the situation of small island developing states. It detailed the potential benefits of building back from disasters stronger (e.g. through more resilient design standards), faster (e.g. through accelerated reconstruction and recovery), and more inclusively (i.e. ensuring recovery support to the poor and marginalized).

The estimates show that more inclusive recovery through better post-disaster support systems is estimated to reduce global well-being losses due to natural disasters by 9 percent – equivalent to a US$52 billion increase in annual global consumption. Overall, the benefits of building back better are estimated at US$173 billion per year globally – and would be greatest among the communities and countries that are hit by disasters most intensely and frequently, such as in small islands and Sub-Saharan countries.

Several countries have demonstrated that social protection systems can indeed be critical for channeling resources to those most in need following a disaster. In Uganda, the Northern Uganda Social Action Fund safety net has disbursed over US$6 million to approximately 50,000 households (250,000 people) in response to drought in 2016/17. In Kenya, the Hunger Safety Net Program, a shock-responsive cash transfer safety net, has supported millions of vulnerable households in the face of severe droughts. Fiji too has a long history of providing social assistance to vulnerable populations which are struggling to meet their basic needs – including in the aftermath of major natural shocks. For instance, Fiji’s Poverty Benefit Scheme (PBS), is a dedicated program supporting the poorest 10 percent of households in Fiji.

However, as climatic shocks increase in frequency, there is scope to further expand and strengthen existing social protection systems. As part of the Fiji Climate Vulnerability Assessment, GFDRR has applied the Unbreakable methodology to understand the impacts of tropical cyclone Winston in 2016, the response measures taken by the Government of Fiji, and how to further improve the resilience of the Fijian population. In response to the storm, the government disbursed nearly US$20 million in aid, distributed among the households enrolled in its three largest social safety net programs. Two years later, empirical evidence is emerging that this timely response was essential to mitigate the long-term impact of the tropical cyclone in Fiji, and to ensure resilient recovery not just of the agriculture and tourism sectors, but of all Fijians. The report also shows that without effective measures to strengthen resilience, by 2050 over 32,000 Fijians could be falling into poverty every year due to climate-related shocks. Finally, it proposes options to make the existing social protection system better able to respond to shocks, in particular through the expansion of the social registry that is used to deliver aid to households.

Given this evidence and the rising costs of disasters worldwide due to urbanization and climate change, the lessons of the WDR 2014 on Risk and Opportunity are as relevant as ever. At GFDRR we are committed to seeing their application in every area of the Bank’s work.

This is the second in a series of blogs commemorating the fifth anniversary of the 2014 WDR on Risk and Opportunity. Read all the blogs here.