A school is not a factory: Why teacher specialization in early grades may not work 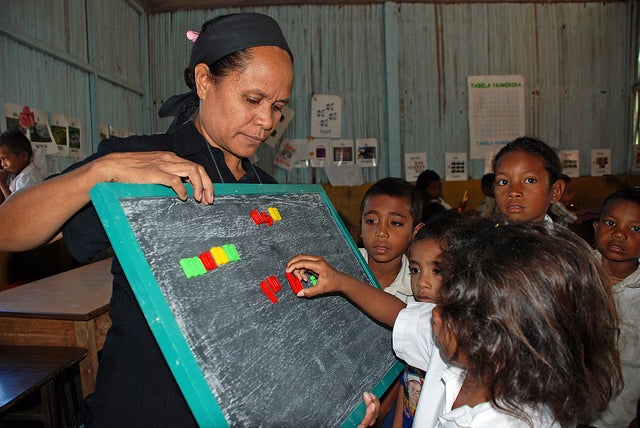 In chapter 1 of book 1 of Adam Smith’s foundational economics book, The Wealth of Nations, he explains the concept of the division of labor. He uses the example of a pin factory.

But if the tasks of pin-making are broken up into individual tasks – drawing out the wire, cutting the wire, grinding the point of the pin, attaching the head of the pin – then they can accomplish much more!

I have seen a small manufactory of this kind, where ten men only were employed, and where some of them consequently performed two or three distinct operations. But though they were very poor, and therefore but indifferently accommodated with the necessary machinery, they could, when they exerted themselves, make among them about twelve pounds of pins in a day. There are in a pound upwards of four thousand pins of a middling size. Those ten persons, therefore, could make among them upwards of forty-eight thousand pins in a day. Each person, therefore, making a tenth part of forty-eight thousand pins, might be considered as making four thousand eight hundred pins in a day.


From one pin a day to 4,800 pins in a day! In education, many school systems employ this notion in higher levels of education: Wisely, few universities would think to employ an economics professor in a biology lecture. But in the younger years, there is more debate. In first grade or second grade, should teachers specialize and teach the subjects in which they are most expert?

“Pupils are not pins” is how economist Roland Fryer puts it in his recent paper in the American Economic Review – “The ‘Pupil’ Factory: Specialization and the Production of Human Capital in Schools.” While even the most traditional economist is likely to accept that, there is genuine policy debate about whether to specialize in the early grades: “Of the 34 OECD countries, 5 consistently use specialized teachers in classrooms in elementary schools. Of those 5, all begin specializing teachers during or after grade 3. Of the 24 countries that don’t use specialized teachers, Austria, Hungary, Norway, Portugal, Latvia, and Israel depart even further from teacher specialization. The average teacher in these countries stays with the same group of elementary school children for at least three years.”

But how does this affect student learning? Condie and his co-authors use simulations to suggest that “assigning teachers to specialize in the subject in which they excel…would raise math achievement by 0.05 standard deviations and reading achievement by 0.03 standard deviations.” (That may not seem so large, but as an organizational change with little recurring cost, it could be cost effective. And what’s more, “these matching improvements are all larger than those realized by replacing the bottom 10 percent of teachers in the value-added distribution.”)

That sounds very promising, but what happens when this is implemented in real life? Fryer carried out an experiment in public elementary schools in Houston, Texas (USA) to find out. One set of schools “altered their schedules to have teachers specialize in a subset of subjects (math, science, social studies, and reading) based on each teacher’s strengths (assessed by the principal of each school).” Other schools continued with business as usual. In the specialization schools, teachers “were approximately 60 percent more likely to be specialized (i.e., to not teach both math and reading, to teach 3 or fewer subjects, or to self-report teaching several classes of different students in 1–3 subjects) in year 1 and approximately 50 percent more likely to be specialized in year 2, relative to teachers in” business-as-usual schools.

The result was surprising – or at least, it would be to economic theorists: Students did worse on both low-stakes and high-stakes tests, and those results held true in both the first and second years of the program. Student attendance also fell.

Why? Teachers teaching fewer subjects means teachers teaching more students. “Teachers in treatment schools are significantly less likely to report providing tailored instruction for their students.” Truly, some of the most promising results in improving education quality in low- and middle-income countries emphasize the importance of helping teachers to teach at the right level, so a program that makes it harder for teachers to do this – because of less time with each student – might result is less learning.

Let me give the second-to-last word to Fryer: “In simple production processes, such as pins, there can be large positive gains from specialization. In schools, however, having teachers specialize may increase the quality of human capital available to teach students through sorting, but may lead to inefficient pedagogical choices… I find that teacher specialization, if anything, decreases student achievement, decreases student attendance, and increases student behavioral problems.”

Of course, all the usual caveats apply – this is one study 46 schools in Houston, Texas, and there’s no reason to be certain the results would be identical in a very different setting. There are probably better (or at least more data-based) ways to assign teachers than based on principal assessments. But it’s valuable evidence, showing results not only on student learning but peering into the processes behind those results through teacher surveys. Helping teachers to reach their students will take more than just assigning them to the station on the education assembly line where they’re most productive…because it’s not an assembly line.
Topics
Education
Countries
United States