Seeing the Human Face of the Global Financial Crisis

The collapse of a US investment bank in the fall of 2008 turned a severe credit crunch into the worst financial crisis since the great depression, providing a blunt reminder that mismanagement of risks does not go unpunished. What is more, mismanaged risks do not respect boundaries in a tightly interconnected world, damaging anything they touch on their path, hurting especially the poor and vulnerable. While financial systems can contribute to economic development by providing people with useful tools for risk management, such as credit, savings, and insurance, they can create severe crises with devastating social and economic effects when they fail to manage the risks they retain.

The global financial crisis that hit the world economy in 2008-09 has changed the lives of many individuals and families beyond imagination. It led to an unprecedented disruption in financial markets and recessions around the globe, damaging the stability and confidence in many advanced financial systems and economies. A recent background paper prepared for the World Development Report 2014 notes that close to 30 million people lost jobs since 2007 due to the ongoing crisis, taking the pool of globally unemployed to about 200 million in 2012. Unemployment rates reached unprecedented levels in advanced countries (figure 1).

Figure 1. The unemployment rate before and after the crisis 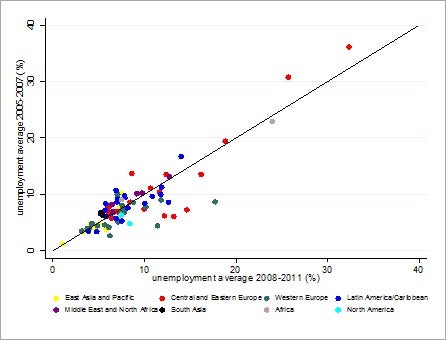 Among those unemployed, the youth has been hit particularly hard. More than half of the youth in labor force in Greece and Spain and one in every four in the Euro Area do not have jobs. More than one third of the unemployed youth in advanced countries have been without a job for at least six months, making it harder to find one every passing day. Close to half of world workers lucky enough to have jobs are in vulnerable employment, especially the young hired in poorly-paid jobs that offer limited insurance or compensation.

Dwindling job prospects and falling incomes in turn challenge the global development efforts and threaten a reversal of hard-won development gains around the world. Indeed, for most regions and income groups in developing countries, progress toward meeting the Millennium Development Goals (MDGs) by 2015 has slowed, especially for reducing extreme poverty and undernourishment. While some recent progress has been made, achieving the MDGs by 2015 remains a distant hope for many fragile and conflict-affected states. In 2015, half of the world population surviving with less than $1.25 per day is expected to be found in these states.

What is more striking is millions of people fell, or are at risk of falling, into extreme poverty and exclusion in advanced countries. In the United States, the epicenter of the financial crisis, poverty rates rose in 2008-11 to 15 percent of the population. In Europe, more than 16 percent live below the poverty threshold, particularly in Eastern and Southern Europe. Poverty is higher among women, children, and youth, and single-parent families deprived of the opportunity to share risk within the family. According to UNICEF, more than 2.2 million children in Spain live below the poverty line and face risk of malnourishment. While social welfare programs shielded some of the poorest from the most severe effects of the crisis, reduced spending as part of the austerity measures is expected to worsen the situation going forward.

The deterioration of economic and social well-being indicators suggests a significant loss of economic time, or a reversal of progress in development. Countries hardest hit by the crisis lost more than a decade of economic time and endured macroeconomic volatility during and after the crisis. In advanced Europe and North American countries, the economic clock turned back by more than six years on average (as high as 8-14 years in Ireland, Italy, Portugal, Spain, the United Kingdom, the United States, and Greece (figure 2). The Gini index, a commonly used measure of income inequality, has also worsened for a number of advanced countries and some countries in emerging Europe and Sub-Saharan Africa. Social and family cohesion has suffered since the onset of the crisis, with increased rates of mental illness, substance and child abuse, and suicides. Conflicts, violent protests, and perceptions of crime have become more prevalent.

Figure 2. Widening income gap between rich and poor in many countries 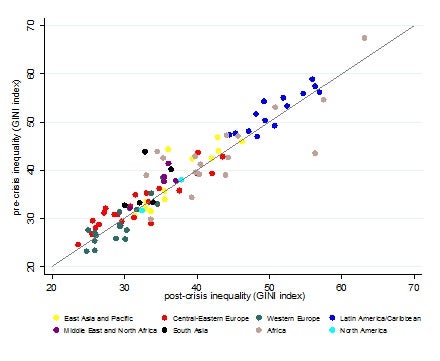 How did we get here from a severe financial crisis to a somber social crisis? Policy failures to anticipate complex macro-financial-social interlinkages, their cross-border dynamics, and the absence of proactive crisis management mechanisms certainly played a role. Costly coping strategies of private and public sectors served as key channels for transforming financial shocks to adverse economic and social outcomes. Policymakers failed to anticipate the side effects on public finances of the massive financial support extended to weak financial institutions. Narrowing fiscal rooms constrained the ability to compensate reduced private credit as financial institutions refrained from lending to repair balance sheets and to wait for economic and regulatory uncertainties to subside. Some countries that were able to adopt less procyclical macroeconomic policies made were less affected by the recent crisis than in the previous ones.

As the efforts to strengthen the resilience of the global financial system continue around the world, the challenge for policymakers will be to ensure proactive, integrated risk management at all levels of the society. Proactive risk management strategies will need to be mainstreamed into the global development agenda, to properly analyze complex, multiple risks with a long-term view, and address them through an integrated approach to safeguard the strategic goals of the international community to eliminate extreme poverty and boost shared prosperity.

The adverse consequences of costly coping responses by the public sector means that more needs to be done to establish proactive contingency planning mechanisms to minimize the adverse implications of crises on people. Such strategies are essential to limit the risk of introducing policies with unintended economic and social consequences (such as austerity programs without adequate social safety nets for the vulnerable).

The limited impact of the crisis on countries that implemented less procyclical policies underscores the need to create sufficient fiscal space. Accumulating resources in good times can help governments to continue their social protection and welfare programs when adverse financial shocks hit. Governments, with the help of the international community, should build capacity to implement countercyclical policies to protect the vulnerable segments of the population while encouraging self-reliance over time.

Figure 3. Turning back the economic clock: A Measure of lost time in economic development 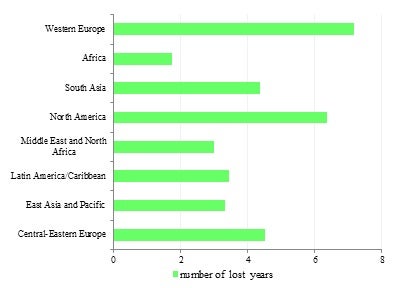 Source: Authors’ computations based on data from Bloomberg (equity prices); World Bank WDI for GDP and consumption per capita; and WDI and ILO for the unemployment rate.
Note: Lost time is computed as a simple average of lost time in terms of GDP per capita, household consumption per capita, equity prices, and unemployment for 52 countries for which data for all four indicators are available. Mission Chief for Trinidad and Tobago and Division Chief, IMF