Shedding light on the informal economy: A different methodology and new data

In Mozambique’s three largest cities (Maputo, Beira, and Nampula), informal businesses—those operating outside formal licensing and registration procedures—outnumber formal firms by a factor of 9 to 1. The World Bank’s Enterprise Analysis Unit recently published surveys of informal businesses in Mozambique, conducted in collaboration with the country management unit and colleagues from the Finance, Competition, and Innovation Global Practice. These surveys were designed to mirror the standard World Bank Enterprise Surveys, which cover the formal sector, but were tailored to better understand the unique conditions in which informal firms operate. Thanks to recent methodological innovation in sampling techniques, these surveys now also provide an estimate of the total number of informal businesses.

The surveys use stratified adaptive cluster sampling methods—a method commonly used in the field of biology—that allow researchers to efficiently study subjects that cluster near each other. In practice, the method is implemented as follows: first, we take a city such as the capital city Maputo, and divide it into 150 by 150 meter squares—each stratified based on the likely concentration of informal business activities (see the illustration below). Second, we randomly select a pre-defined number of squares for a full enumeration of all informal businesses in each. The process is adaptive in the sense that enumeration is expanded to all adjacent squares if the number of informal firms found in any square is above a pre-defined threshold. This method allows for the same unbiased precision as stratified random sampling (Thompson 1990) but it can be implemented at a lower cost and with reduced fieldwork. Informal businesses tend to operate in close proximity to one another, forming clusters of economic activity. 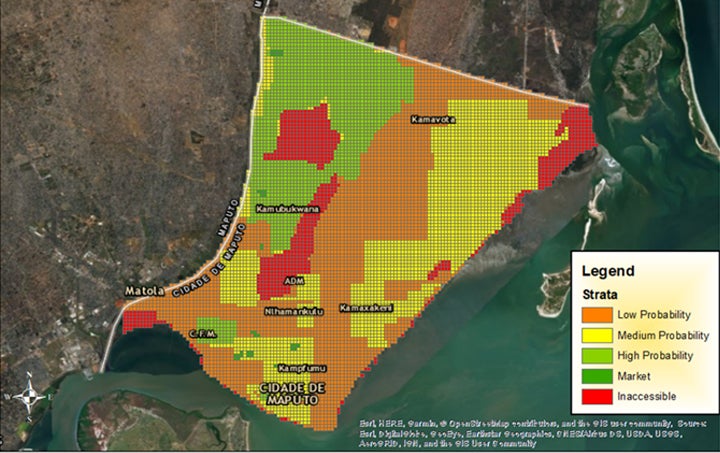 Defining informality is a contested topic. For our purposes, the definition is one where the business activity is not registered with the appropriate authority(ies). But even this is not as clear cut as it seems as the definition of registration with appropriate authorities varies by country. In Mozambique, for example, we define a formal business as one that adheres to each of the following three requirements: i) it has an operating license (e.g., from municipality, or Balcão De Atendimento Único); ii) it has a business registration certificate (e.g., from Conservatória Do Registo Das Entidades Legais, or Balcão De Atendimento Único); and iii) it has a taxpayer’s identification number (NUIT). A business that fails to meet any one of these three requirements is considered part of the informal economy.

These surveys go beyond just overall estimates of the number of informal business in the economy. What is unique about these surveys is that they also provide data on performance and characteristics of the businesses. Of the 11,082 businesses that were enumerated, 554 were randomly selected to participate in a longer interview that contained over 200 questions. The topics covered included business characteristics, performance, infrastructure, interconnectedness with the formal sector, and employment, amongst others.

Until now, existing estimates of the informal sector have come from either household surveys that estimate employment size or from attempts by government agencies to document the grey economy. With this new approach, not only is it possible to conduct surveys in a shorter period of time, but it is also possible to generate representative samples of the informal sector, yielding estimates of the size and characteristics of the businesses operating in it. Perhaps more importantly, this new data has the potential to address many of the unanswered questions that development practitioners need answers to in order to better understand the grey economy.

We have posted similar data for the city of Harare, Zimbabwe, and are in the final stages of finishing data collection in two cities in Lao PDR. We are preparing to implement the same methodology in Somalia and Zambia. It is our hope that researchers and policy makers will make use of this data.

To find more details or to keep up to date with our surveys, please visit www.enterprisesurveys.org