The shifting gravity of global poverty

Thirty years ago, 1 in 7 of the world’s extreme poor – those living on less than $1.90 a day – were in Sub-Saharan Africa. Over the years, as other regions successfully reduced their poverty levels, this number has increased and by 2015, 4 in 7 of the global poor were living in Sub-Saharan Africa. The newly published Poverty and Shared Prosperity Report warns that as many as 9 in 10 of the world’s poor may live in this region by 2030 if current trends continue.

This shifting geographical concentration of poverty can be visualized spatially. The map below, whose idea and method is from Quah (2011), places all poor individuals according to their country of residence, finds their average location at a given point in time, and projects this point (“the center of gravity”) to the earth’s surface. 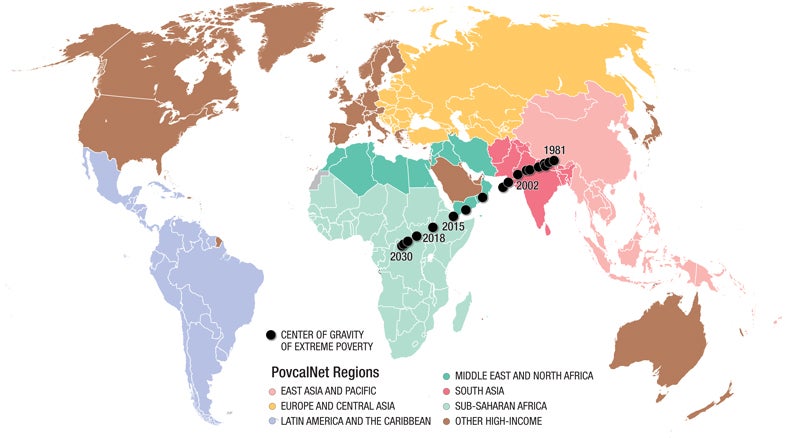 In 1981, the center of gravity was in China, the country with the greatest number of poor at the time, but as China started its massive poverty reduction, over the 1990s the center of gravity shifted to India. In recent years, India has embarked on an equally impressive poverty reduction trajectory, gradually shifting the focal point across the Arabian Peninsula and in 2015 for the first time into the African continent. Projections indicate that today the center of gravity is in South Sudan, a country plagued by fragility and high poverty rates, and that by 2030 it probably will move farther into Africa and end up in Democratic Republic of Congo, the country projected to have the second most poor in 2030, after Nigeria.

Plotting the average location of people by their income level affords a visualization of this pattern. The center of gravity of individuals living on $1 per day is in Sub-Saharan Africa, but as this threshold increases to $10, the center of gravity shifts towards India and then China. Increasing the threshold further shifts the focal point up north to the Norwegian Sea, between North America and Western Europe. Raising the standard to $100 a day – a benchmark only 1.5% of the world has the luxury of experiencing – shifts it further towards North America.

The Center of Gravity of Global Income, 2015, by Income Level 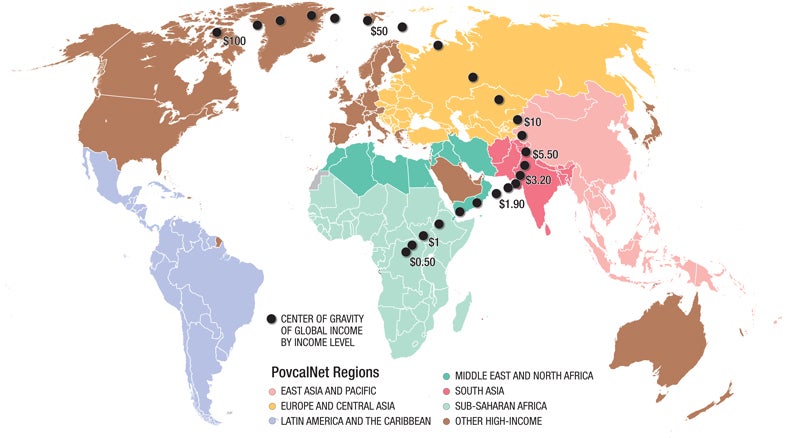 Although this geographical inequality of welfare surely means that poverty is most severe in Sub-Saharan Africa, it does not imply that poverty is history in the rest of the world. Living on $3.20 dollars per day is by no means a state of extravagance, and individuals living at this threshold still suffer from important deprivations. Chapter 3 of the Poverty and Shared Prosperity Report introduces a new relative poverty line, the societal poverty line, which is constructed around the poverty lines that countries themselves use to measure poverty and increases with economies’ standard of living. Using the societal poverty line suggests that 2.1 billion people are poor according to the typical standard of the societies they live in.

In order to #CountPovertyOut, we need to take a more holistic picture of poverty, which acknowledges that poverty means different things in different parts of the world. As global extreme poverty continues to gravitate toward Sub-Saharan Africa, we need to double down on efforts in this region while not forgetting that other forms of poverty still exist outside of the African continent. What a good report! It's quite informative.
Again, another reason why most countries lying under sub Saharan are terribly poor is due to poor governance, corruption and political instability.