Tell us how we are doing: Motivating teams through feedback vs. public recognition

Frontline workers in the health and education sectors are hit particularly hard by COVID 19. They are facing high risks of infection and expected to go above and beyond, thereby drastically increasing their work pressure. When they are exposed to such high risks, how can we help motivate them and ensure good-quality service delivery?

Most of these frontline workers are women. In South Africa for instance, 90 percent of all registered nurses and 75 percent of primary school teachers are women. As in many other parts of the world, they often receive modest salaries or small stipends. Whether employed by government agencies, private enterprises or non-governmental organizations, their compensation may not be sufficient to encourage them to stay and perform well. When raising salaries is not an option, two types of motivation can be activated to boost performance: image motivation and intrinsic motivation (Ariely et al., 2009; Bénabou and Tirole, 2003). When people are motivated by their image or reputation (they want others to see they do well, or better than others), offering public recognition to those who perform best may help improve effort. When people are intrinsically motivated (they want to perform well, or better than others, in and of itself), giving feedback on performance may increase effort. However, the literature that compares the effect of public recognition to private feedback is narrow and has found mixed results (Ashraf et al., 2014; Tran and Zeckhauser, 2012).

In an experiment conducted in South Africa and discussed in a recent paper I test whether activating intrinsic motivation works better than activating image motivation. In other words, I ask the question: Aside from financial rewards, what works best to incentivize female work teams and improve service delivery? To answer this question, I partnered with the Peninsula School-Feeding Association (PSFA), an NGO mandated by the Department of Education to implement the National School Nutrition Programme. PFSA delivers meals to disadvantaged schools in the Western Cape region. School-feeding teams are typically composed of 4 to 5 workers, mostly unemployed women, recruited from the community. Each worker receives a small monthly stipend for their service. Their responsibilities include being present, preparing and serving food on time, cleaning up after the meal and managing stock.

About 450 school teams were randomly assigned to 1 of 4 groups: (i) private feedback: teams received monthly scorecards including information on their absolute performance - overall and disaggregated in four distinct areas - and on their rank relative to other teams as well as highlighting areas of improvement (see picture); (ii) public recognition: the 20% teams scoring highest by the end of the term would receive an award in the form of aprons and hats for each team member and recognition during a public ceremony with school officials and management committees (iii) both private feedback and public recognition as described above, or (iv) no intervention. Importantly, to ensure that goal perceptions were comparable across groups, prior to the experiment all schools received a letter giving them clarity on role, expectations and performance criteria.

While the experiment runs through one school semester, data was collected over two school semesters through 1,532 unannounced visits on 4 main areas: safety and hygiene, staff commitment, timely delivery of nutritious school meals, and handling of stock.[1] In addition, the overall score reflects an aggregation across all components.

What do we learn?

Telling teams how well they are doing can improve service delivery

Those results show that intrinsic motivation and information on performance are important drivers of effort, while public recognition may have counter-productive impacts crowding out intrinsic motivation - especially for low-performing teams. They may inform policies that aim to improve the quality of service delivered by fixed-wage workers in sectors where there is limited capacity to increase monetary compensation.

These findings apply to female teams. Further research would interestingly test if they hold with male teams. There is evidence on competitive motives being higher among men than women (Barankay, 2012; Huberman et al., 2004; Gneezy et al., 2003), suggesting that male teams might respond better to public recognition. 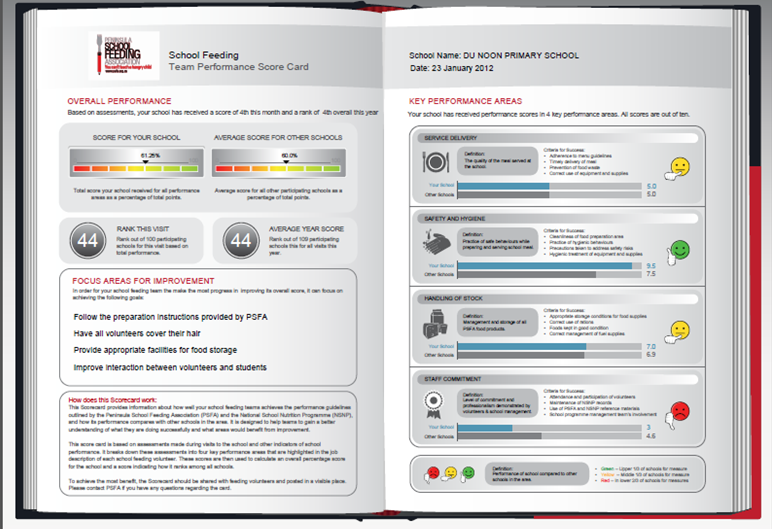 [1] Collecting data over two semesters allows to capture a lag in the behavioral response to incentives.