Recently, the World Bank led a discussion on these questions, highlighting key findings of impact evaluations of input subsidies programs from Mozambique, Tanzania, and Haiti.

Why is fertilizer use so low in low-income countries?

Contributing factors to low yield responses to fertilizer use include lack of complimentary inputs such as improved seeds and water, poor soil quality, mistiming of fertilizer applications, poor quality or a mismatch in the fertilizer nutrients being applied with the nutrients deficient in the soil. Contributing factors to higher fertilizer prices relative to crop prices include import restrictions and taxes on fertilizers, high transportation and logistics costs, and low fertilizer demand that prevents the economies of scale for input providers that could lower fertilizer prices. Addressing each of these factors requires a specific set of interventions.

Beyond those two ratios, other key constraints could potentially keep fertilizer use at low levels, even when it is profitable to use. Contributing factors could include lack of awareness by smallholder farmers, insufficient knowledge or experience on fertilizer use, aversion of smallholder farmers to additional risks to adopting this technology, and credit or liquidity constraints. Addressing these factors also requires a different set of interventions. 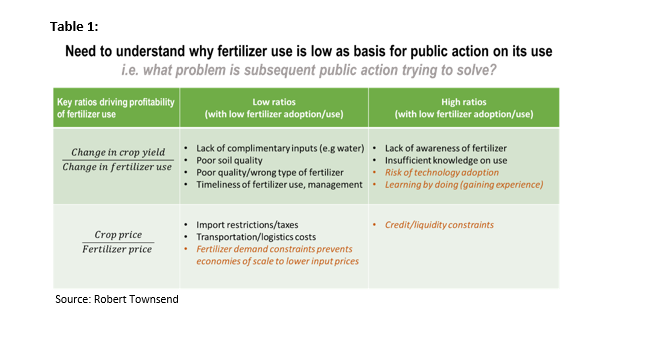 What is the public-sector role in increasing fertilizer use in low-income countries?

Taking up the lion’s share of agricultural investments in low-income countries, subsidies are widely used as a policy tool for increasing fertilizer use, for boosting yields and income for the poor farmers. While designing input subsidy programs, it is important to think about which of the constraints described above justify public action, and use such information to guide the design and implementation of the program. Input subsidies are often intended to be temporary in nature to address initial constraints to fertilizer use highlighted in orange in the table above.

What did we learn or confirm from the experience of Mozambique, Tanzania and Haiti?

Mozambique: sustaining the impact of a temporary input subsidy program is not easy. To address liquidity constraints of smallholder farmers and to share the risk of experimentation, a pilot subsidy program targeting 25,000 farmers was implemented across 5 provinces, combined with complementary savings interventions. The program provided a one-time voucher equivalent to 75 percent of the price of a package of improved seeds and fertilizer, complemented with savings education and easy access to a mobile bank. While only 40 percent of the vouchers were used, the one-time voucher boosted maize productivity that persisted two years after the voucher intervention, the period for which it was measured. Overall, per capita incomes increased by about 10 percent led by a 15-20 percent increase in agricultural incomes. The persistence of impacts after the voucher intervention is likely due to induced learning. However, farmers with better savings options built up savings rather than reinvesting in agriculture intensification, perhaps suggesting that access to the savings options was being used for risk mitigation through a buffer savings to smooth shocks, given that risks in agricultural production are so high.

Tanzania: targeting of input subsidies is subject to efficiency-equity trade off. The National Agricultural Input Voucher Scheme provides a 50 percent subsidy for purchased fertilizer and improved maize and rice seeds. The subsidy is meant to address financial constraints to small-holder farmers cultivating no more than 1 hectare of maize or rice and who could afford the remaining 50 percent of the input costs. The evaluation examined the impact of different beneficiary selection methods: (i) a public lottery to randomly select new voucher beneficiaries from among the list of eligible farming households identified at village level; and (ii) direct choice of new voucher beneficiaries from the list of eligible farmers, by the local “Village Voucher Committees”. In villages where the local Village Voucher Committees chose beneficiaries, farmers who were most able to benefit from the program appear to have been targeted more efficiently than in other villages in which beneficiaries were chosen randomly, resulting in higher use of inputs and, in some cases, yields among households in the VVC villages. In villages where farmers were randomly selected to receive the voucher, selling or sharing of vouchers between beneficiaries and non-beneficiaries was more common, leading to similar usage of inputs and yields between beneficiary and non-beneficiary households.

Haiti: implementation of inputs subsidies is not trivial. The Technology Transfer for Smallholders Program, also to address financial constraints, funded by the GAFSP provided a subsidy on the purchase of agricultural inputs by about 40,000 farmers in the north and northeast part of Haiti. The evaluation results showed little difference in yields between the beneficiaries and non-beneficiaries of the program. Possible reasons are that: (i) the farmers receiving the vouchers were already using a relatively high level of fertilizer, resulting in a substitution from purchased fertilizer to subsidized fertilizer, and/or (ii) farmers lacked information about the timing and duration of the subsidies received. In the following season, a subset of farmers who received more information about the program, used more fertilizer, hired more labor, took on more loans, and cultivated larger areas. This points to both the importance of targeting and communication for the success of subsidy programs. In contrast the impacts on agro-forestry farmers was more significant due to better targeting and highly relevant technology (informed by research).

Clearly, input subsidies can yield positive outcomes. But the design of the intervention should be in line with socio-economic situations on the ground and be adjusted as those evolve.

As for designing inputs subsidy programs, there is need for further attention to implementation issues, targeting strategies, research-based technology transfer and the need for risk management interventions.

*The authors acknowledge the overall guidance and support of Robert Townsend, Florence Kondylis, Natasha Hayward and Paul J Christian for the workshop and blog, as well as the presenters: Michael Carter, John Robert Chery, Xavier Gene and Abimbola Adubi.