We have been here before: Development agencies and disruptive technologies

2000: “Genome science will … revolutionize the diagnosis, prevention and treatment of the most, if not all, human diseases.” President Bill Clinton

2003: “The convergence of nanotechnology with information technology, biology and social sciences will reinvigorate discoveries and innovation in many areas of the economy.” President George W. Bush

2013: “3D printing has the potential to revolutionize the way we make almost everything.” President Barak Obama

Do you feel different going to a doctor now compared to 2000? Do you know of any new discoveries resulting from the convergence of nanotechnology and the social sciences? Have you used anything produced by 3D printers? We answer “no” to these questions; most readers of this blog probably would as well.

Does this mean these initiatives, that have attracted billions of dollars of public and private investments, failed? Not at all. Cancer patients want to be sure they are subject to genome sequencing to choose the right course of treatment. The 10-nanometer computer processors arriving next year promise a tangible boost to machine learning operations. Rapid prototyping, which is based on 3D printing, allows engineers to verify their designs and perform tests before setting up a whole production line. The human genome, nanotechnology, and 3D printing are greatly disruptive existing processes, but the revolutionary aspirations of the three US Presidents have yet to be materialized.

The Gartner Hype Cycle (Figure 1) shows the evolution of perceptions of new technologies over their lifecycle.

The interest in a technology might be triggered by a product launch or press coverage. Early adopters start experimenting with the technology. The increased attention from the media sparks public interest and speculation. The expectations about what the technology could achieve, and its potential benefits are inflated to unrealistic levels. Investment in the new technology peaks. Then, as the technologies tend not to meet the heightened expectations and the experiments fail to deliver, the interest of businesses and consumers dissipates quickly. The trough of disillusionment is reached. Market valuation of the technology collapses. If the technology survives, it moves along the “slope of enlightenment” where the few remaining companies develop methodologies and best practices. The technology is stabilized with clearly demonstrable benefits on the “Plateau of Productivity”. Precious few of that technology’s venture-backed startups will deliver on their investment promise. 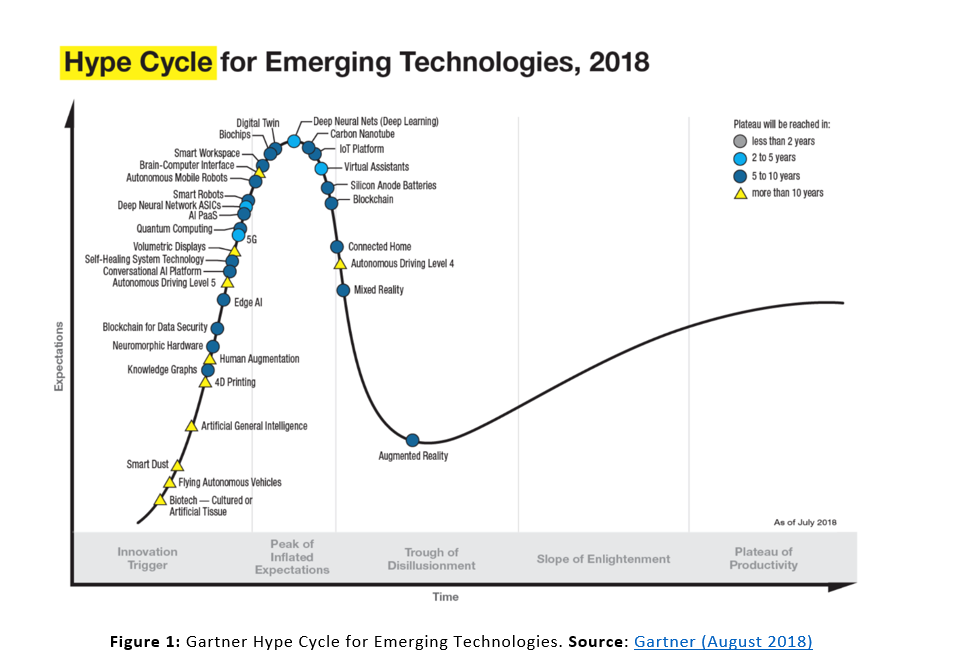 Passion and optimism drive us to push the boundaries of science and technology. People need to be excited, idealistic and brave to venture into uncharted territories of technological progress. And the modern market economy developed an effective ecosystem of venture capital and start-ups, with its fail-fast-fail-often culture, to encourage and promote such risk takers. If successful, the rewards are enormous, but the downside is huge: the failure rates of start-ups range from 70 to 97% in different industries. In this environment, what role should Development Agencies (DAs) play?

The Gartner cycle represents the cognitive bias in technology and innovation (also known as Amara’s Law) as a tendency to overestimate the importance of technology in the short run and underestimate its importance in the long run. This trajectory of technology adoption presents two distinct opportunities for policy interventions:

At the same time, the lure to be involved is hard to resist for the DAs. Internally, large corporations are actively campaigning for the adoption of their innovative products; consultants are lobbying for lucrative contracts to help the international bureaucracies to “modernize” themselves; young staff see opportunities for quick advances in the new areas. The demand for Data Scientists is skyrocketing even though the competencies for that occupation are not defined. Development partners and client governments are also asking for support. The hope is that the innovations would allow developing countries to leap into the future by replacing traditionally slow and costly approaches with the much cheaper, better alternatives promised by techno-evangelists. Why build systems of traditional data collection when soon the same indicators could be derived from social media and satellite images? Cautious voices are perceived as retrogrades, who fail to understand that “this time is different”.

Indeed, those lucky to catch the early stages of the hype will benefit. The few who correctly guessed the 5-10% of successful innovations will win even more. But who will take responsibility for the advice given to our clients on the 90 percent of innovations that will never reach the production maturity stage? The time horizon of institutions is much longer than the time horizons of individuals. It might be perfectly rational from an individual’s perspective to promote untested innovations, because that individual will retire or move to another position by the time the disillusioned clients start asking difficult questions. For the institution, the reputational costs could be very high.

Undeniably, new technologies have huge potential to improve the lives of people in developing countries. Over the last several years, we went through the Big Data Hubris that has now morphed into AI and Machine Learning; at one point, we thought that blockchain was the remedy to all ills of the world; we tried forecasting economic indicators with tweets, predicting poverty using satellite images; we were shown drones delivering blood to remote hospitals in Africa, 3D printers making surgical instruments on the spot, and  many other innovations bunched under the concept of disruptive technology.

None of these technologies has yet matured to the levels where they could be recommended for global adoption (like a mobile phone or computer tomography). Some, e.g., drones delivering medical supplies, are now being piloted, while others are still going through the research and prototyping stages. Bringing these technologies to scale and wide market adoptions might take a long time and very significant amounts of resources. Furthermore, their full effects will not be realized until the necessary complementary innovations are developed and implemented. Given the historic rates of correct prognoses, can we responsibly promote the new technologies to our clients, many of whom lack the capacity to objectively evaluate the technologies themselves and ultimately rely on our expertise?

Development agencies should take an active role in protecting their clients from using untested technologies and educate the world development community about the advantages and risks associated with new technologies. Adopting a more reserved, careful approach seems to be optimal from the institutional perspective, similar to Kreps (1979) “preference for flexibility” argument. Yes, we might not be the first to adopt some hot new techniques, but we avoid the costs and reputational risks of investing in technologies that will prove to be not useful, insecure, ethically questionable, or harmful.

To be a trusted advisor, the World Bank should support a strong team of top-level experts integrated into the international tech community. Such a team would experiment with new technologies helping to scale-up and foster wider horizontal adoption of the subset of innovations where evidence of positive impact is indeed available. One practical step towards this new approach might be for the World Bank to produce a yearly report on the state of new technologies for development. The report could provide guidance to development practitioners on the state of maturity and risks of emerging technologies to inform their decision on such technology adoption. Hi Michael,
I really liked this blog post and think you articulated the need for education and evaluation of new technologies well.
I’m drawn to the ICT4D concept, especially after attending the World Cities Summit in 2016 but I had uneasy feelings of how easily products and technologies were used without stressing the importance of creating an infrastructure that could maintain them. I see “Innovation” and “disruptive technologies” as sensational words that don’t address the reality of change. I think we’ve come a long way from the printing press, the car, and the atomic bomb but innovation is no longer these new ways of doing things but re-evaluations of processes and micro-shifts for specialization. I may be pessimistic about innovation because of how it seems to focus on and is driven by profit gains rather than humanity gains.
Nevertheless, I think the blog post helped me realize what changes need to happen and recognize the importance of what new technologies represent. I am optimistic of a more equitable future but I still wonder how can resources be re-allocated fairly? And will an emphasis on long-term effects and education change policies that will close the rising socio-economic inequality gaps within countries? I’d love to know your opinion or suggestions of sources of what you think the next approach will be to address these problems!