What Can We Learn from Projecting Poverty for 2030?

As a poverty economist, I know how difficult it is to forecast poverty numbers for even the next year. But, since the World Bank Group (WBG) announced the goal of ending extreme poverty by 2030, I have been projecting poverty numbers of some countries and regions for nearly two decades into the future. I could not help but ask myself “What am I doing this for?”

Forecasting versus Benchmarking
I looked for answers by reading recent papers on similar topics. Most seemed to be competing to prove that their projections were the most plausible. Some seemed better than others, but they were not convincing enough to erase my doubt. Before giving up the search, I reread Ravallion (2012, 2013) , and at last got an answer. In both papers Ravallion projected future poverty under the assumption that the developing world maintains its current pace of growth and poverty reduction. Although his methodology ensures that his projection predicts future poverty accurately if this assumption holds, it is still uncertain whether this assumption will hold and, consequently, whether his projection will prevail.

But, Ravallion does provide a benchmark. His projection tells us whether the developing world should focus on maintaining the status quo or whether it needs to accelerate its pace. Furthermore, by changing assumptions, differences between new projections and the benchmark can inform us of key bottlenecks. Hence, I became convinced that poverty projections are useful if conducted for benchmarking and policy simulations and, along with my colleagues, began working on our recently published paper, “Is Extreme Poverty Going to End?”

A New Benchmark
The usefulness of benchmarking is determined by the underlying assumptions. Ravallion called his assumptions “optimistic.” Although I initially thought they looked reasonable, after studying them carefully, we realized some of his assumptions are indeed optimistic, possibly too optimistic.

Here are the three key assumptions of Ravallion’s and of our paper for comparison:

The growth rate of 4.5 percent is not so unrealistic, but it is unrealistic to assume all countries grow at the same rate. According to PovcalNet,  there have been large variations in the growth rates of developing countries. In fact, poorer countries in general have grown more slowly; therefore the assumption of a uniform growth rate for all countries is optimistic and likely overestimates the progress of poverty reduction. The other two assumptions also seemed optimistic; thus we replaced these with more realistic assumptions and created a new benchmark.

Key Results
Our benchmarking analysis suggests that if each country maintains its current pace of economic growth, population growth, and changes in distribution, then the global poverty rate will decline to 8.6 percent by 2030. This is significantly higher than the extreme poverty target of 3 percent. According to our decomposition analysis (figure 1), a key contributor to the high poverty projection is the large variation in growth rates of developing countries. Indeed, switching from the uniform growth assumption to the country-specific growth assumption raised the poverty projection by 5.7 percentage points. Introducing country-specific population growth rates and considering recent within-country inequality trends also raised the poverty projections, but the impacts were not as strong. 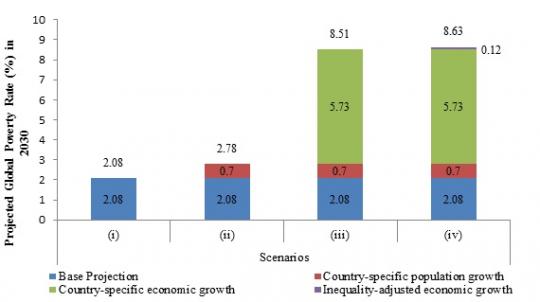 What Will It Take to End Extreme Poverty?
Two papers helped us organize our findings: first, Dollar, Kleineberg, and Kraay showed that the main driver of poverty reduction in the past has been growth, and that the contribution of reducing inequality has been minimal. Second, Basu clarified with an interesting hypothetical example that their findings explain well what happened, but do not necessarily indicate what is going to happen or what is needed to meet the extreme poverty target, and also argued for the importance of promoting shared prosperity.

Our findings are consistent with Basu and Dollar, Kleineberg, and Kraay. For example, like Dollar, Kleineberg, and Kraay, we found that within-country inequalities will have a minimum impact on future poverty if they maintain the trends of the last 10 years. But, like Basu, we also found that accelerating growth alone is not enough and that promoting the sharing of prosperity is necessary to meet the extreme poverty target. Indeed, our projection suggests that unless GDP per capita in the developing world grows at an unprecedented pace (around 10 percent) until 2030, the target cannot be achieved by accelerating growth alone. The only difference is that Basu focuses on the sharing of prosperity within a country,  while our analysis suggests a slight extension of this concept—the sharing of prosperity across countries—is also important.

Conclusion
I remain skeptical of the use of projections to forecast poverty into the distant future, but I am convinced that projections can be useful if they are used for benchmarking or policy simulations, as shown by our study. Our work on this topic will continue and any comments or suggestions would be appreciated. Main obstacles seem to be conflict, uprisings, wars, natural disaster and climate change, all of which seem to be increasing and contribute to extreme poverty... How can governments better anticipate or manage such very difficult occurrences, so as to minimize their impact on poverty levels? Agree with author that within-country inequality should not be underestimated, especially when in most poor countries, 70% of the population lives below the poverty line. Relying on growth has not thus far and will probably never help alleviate extreme poverty...cash to the very poor might be the only way to help them lift themselves out of poverty (governments willing...).

A suggestion...It might be useful to evaluate when governments are truly committed to growth...The poorer the country, the more governments seem interested mainly in the survival of the elites and care little about the poor...and too often, the perception is that the survival of the elites hinges upon maintaining significant inequality gaps to fend off dissent from the poor... (the reality is that many people are interested in what happens to them and their families, in their own lifetime...) A subject that may deserves serious consideration. What are the incentives for governments to eradicate extreme poverty? Can some be devised and proposed to Governments? A lot of persuasion may be needed, too...mainly by people from the South, if they understand and care about extreme poverty.

I enjoyed this paper very much and believe it usefully adds to our stock of knowledge about what it takes to end extreme poverty. It is a powerful rejoinder to the erroneous claims I’ve heard from some quarters that the Bank’s 3% global poverty target is all but guaranteed to be met and is therefore lacking in ambition.
A key question is how far business as usual will take us. This informs our judgment of how ambitious the 3% target is, or in other words, how much bending of the arc of history is required.
As your bar graph shows, the difference in results between Martin’s benchmarking exercise (which results in the 3% target being met) and your benchmarking exercise (which results in a global poverty rate of 8.6% in 2030) is nearly all accounted for by your use of country-specific historical growth rates to project future growth.
Looking more closely, two regions - South Asia and sub-Saharan Africa - have experienced lagging (survey-based, per capita consumption) growth rates which account for most of the difference between the two exercises.
South Asia is dominated by India, but as you point out in the paper, slow consumption growth recorded between 2002 and 2010 can be explained by the 2009/10 survey occurring at the height of a severe drought. If the newer 2011/12 survey data point is used, South Asia looks more or less on course to meet the 3% goal and this change alone would bring your global benchmark down 1.3 percentage points to 7.3%.
As for Sub-Saharan Africa, you find that per capita consumption has only grown at 2.1 percent a year between 2002 and 2010. This may surprise some readers as 2002 is the year when Africa’s economic growth took off. The truth, however, is we don’t know nearly enough about what has happened to household consumption in this period. Less than half of the region’s countries have undertaken two surveys - the minimum required to discern a trend - since the start of the century.
The reliance on historical survey-based growth estimates to project future growth is one of the virtues of your approach to benchmarking global poverty, as it avoids the messy process of combining irreconcilable data from national accounts and surveys. However, as the points above suggest, it is also a weakness given the paucity of surveys.
One separate point: while I agree that the way in which the benefits of growth are distributed will be crucial to meeting the 3% target, I disagree that past distributional trends at a country level are a meaningful guide to future trends. Forecasting distributional trends may be even harder than forecasting poverty.
Laurence

Have we resolved the question as to what defines poverty?