What Does Adam Smith’s Linen Shirt Have to do with Global Poverty?

In his Inquiry into the Nature And Causes of the Wealth of Nations Adam Smith pointed to the social-inclusion role of a linen shirt in 18th century Europe:

“A linen shirt … is, strictly speaking, not a necessary of life. 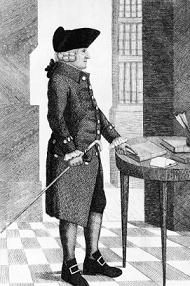 The Greeks and Romans lived, I suppose, very comfortably though they had no linen. But in the present times, through the greater part of Europe, a creditable day-labourer would be ashamed to appear in public without a linen shirt, the want of which would be supposed to denote that disgraceful degree of poverty which, it is presumed, nobody can well fall into without extreme bad conduct.”

This passage has often been used to justify the view that poverty is not absolute but relative—that certain socially-specific expenditures are essential for social inclusion, on top of basic needs for nutrition and physical survival.

The way this idea is implemented in practice is to set a “relative poverty line” that is a constant proportion of average income for the country and date in question. That is how poverty is measured in most of Western Europe. By contrast, poverty measures in developing countries have almost invariably used absolute lines, which aim to have a fixed real value over time. The World Bank’s international “$1 a day” poverty lines also aim to be absolute lines across countries, using purchasing power parities from the International Comparison Program.

Yet much social science research in developing countries has confirmed the social roles of certain forms of consumption—just as Adam Smith had noted about a linen shirt in 18th century Europe.  Anthropologists and economists have pointed out that festivals, celebrations and communal feasts are not just entertainment. They have an important social role in maintaining the networks that are crucial to coping with poverty and even escaping it. Household budget surveys have often revealed seemingly high expenditures on celebrations and festivals by very poor people. It is also known that clothing can serve an important social role. In many developing countries today one can see even very poor, and evidently undernourished, people with cell phones. And much research has also suggested that people in poor countries care about relative deprivation, as typically revealed through self-reported questions on happiness or satisfaction with life.

But such research findings do not imply that poverty lines should also be set at a constant proportion of the mean. This assumes (implicitly) that the cost of social inclusion needs are much lower for poor people—indeed, their cost goes to zero as incomes fall to zero. That is implied by a poverty line set at a constant proportion of average income. If we were to apply such an idea to poor countries—recognizing that poor people too have social inclusion needs—we would be saying that the cost of Adam Smith’s linen shirt can be virtually zero for the poorest person. But that makes no sense; the cost of a socially-acceptable linen shirt will not be zero, and will presumably be no different for a poor person. This is a troubling property of such poverty measures.

To come up with a feasible approach to measuring “relative poverty” that can span both poor and rich countries, Tony Atkinson and Francois Bourguignon (AB) have postulated two key capabilities, namely physical survival and social inclusion. The former is the capability of being adequately nourished and clothed for meeting the physical needs of survival and normal activities. On top of this, a person must also satisfy certain social inclusion needs. Each capability has a corresponding poverty line, giving the absolute and relative lines. AB proposed that one should only be deemed “not poor” if one is neither absolutely poor nor relatively poor.

However, AB follow the Western European model of assuming that the relative line is a constant proportion of the mean. This assumption needs to be dropped, to allow for the (strictly positive) cost of Adam Smith’s linen shirt. On doing so one gets the “weakly relative poverty lines” that I have proposed in a paper with Shaohua Chen, soon to be published here. The following figure shows how we implement the idea, using the same data set on national poverty lines that we used to derive the new international absolute line of $1.25 a day (as documented here). 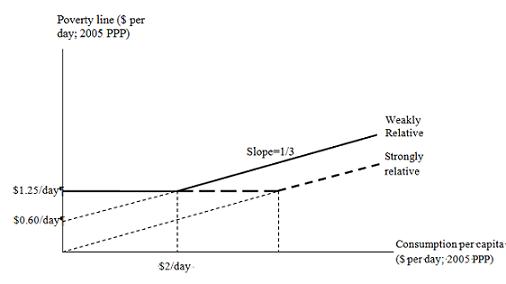 The weakly relative line is $1.25 a day up to a mean consumption of $2 a day, and then rises with a slope of 1:3. The lower bound to the relative line is $0.60 a day, which can be thought of as the cost of Adam Smith’s linen shirt.
With economic growth, our weakly relative poverty lines tend to rise after some point, and proportionately more as average income rises. But they will never be proportionate to the mean. So if all incomes grow at the same rate, all poverty measures will show a decline. This is in marked contrast to the strongly relative measures, which will show no change even when incomes of the poor grow at the same rate as for others.

In the coming months we will be updating the global poverty measures to 2008, including the (weakly) relative measures. We would like to hear what you think about this approach to incorporating the insights from Adam Smith about the importance of social inclusion needs. This is a very interesting article to read, specially for me. I'm Brazilian and I constantly see the distinc lines - relative and absolute poverty. As many people know we have a very sucessfull government program called Bolsa Família, which basically provides a revenue for very poor people in our continental country. And I have already read some articles on this program and they all relate to the main expenditures to food, health and costumes (mainly to food). So, obviously it's a need and people feel better with a clean and beautiful costume. It's so much sad when some politicians and citizens see this kind of posture as a unnecessary public policy for poor people.
Maybe it is not a rich comment, but I would like to say that.
Thanks!

Although this might be explained in the forthcoming paper, it is not clear from the post where is the 1:3 coming from. The relative portion of the poverty line (1/3) captures the costs associated with social inclusion, which, I assume must vary a lot across countries. As oppose to the absolute poverty lines where a basket of needs could be expressed in monetary terms (international dollars), how can we assign a monetary value to, say, participating in elections or not suffering from discrimination?

I am completely in love with your article. Since I am from India and i know how much people spend money on festivals and celebrations. And India is the country of festivals. It is mandatory to Indians to celebrate festival,even though it is not that important festival. They spend hundreds of rupees to buy stuff for festival. I always believe that this is main reason behind poverty which becomes a communicable disease and it is spreading everywhere despite being measure taken by government.

The thing about absolute poverty is that it is universal and translatable; relative poverty and social exclusion are both very much dependent on national factors such as political structure, social customs, etc.

Something I've noticed is that most reporting on poverty in poor countries is done by international observers. I can't think of many national bodies in third world countries which self-collect and self-report their own poverty statistics (though it could just be that I'm not searching through the right channels to find their research - international reports are usually well indexed online).

Rather than getting the World Bank or other UN affiliates to try to measure relative poverty, maybe the Bank should encourage poor countries to self-report. Getting governments to collect their own data and might nudge them towards forming their own measures to tackle relative poverty. Obviously, there is scope for the Bank to provide guidelines and specially targeted programs to help leaders in fragmented societies develop worthwhile policy.

(I know I'm late on commenting, but I only recently came across this via Oxfam's blog)

I see no reference to the individual and what s/he thinks about his/her (hir) own economic status. Yes, surveys of "household budgets" are referenced and it can reasonably be concluded that individuals making those expenditure decisions did so based on what was/is of value to hir and hir family (as s/he perceives it to be for the individual members). However that seems to end consideration of what individuals *choose* to do with their income and assets, what motivates an individual. And there will be differences in motivation, as well as the choices, between individuals even within the same relatively small geographical area of the same country - even within the same biological family! Humans are not ants or bees!

Instead off goes this article - like so many others by and supportive of actual and quasi-government agencies - to the assessments and proposed implementations of government, all of which operate on the principle of initiation of physical force. For what purpose? Is it to continue the currently dominant idea that governments are a necessity, not only for social order but for alleviating "poverty" no matter how it is defined? I strongly suspect so. This assumption is what needs to be challenged, but I don't expect it from government and quasi-government economists at any level, including the World Bank.