The question has been asked often in the context of the post-2005 commodity price boom. In a recently published working paper, What drives local food prices? Evidence from the Tanzanian maize market, we examine the factors driving movements of prices in 18 major regional maize markets in Tanzania. The results underscore the importance of measuring and accounting for the influence of domestic drivers of local food prices, such as harvest cycles and weather disturbances. They also find that while the main external market (Nairobi) exerts a small, but statistically significant, influence on maize markets in Tanzania, the effect is much less than that of South Africa or the US market, often considered the “world” price.

Perhaps most importantly, because the Tanzanian maize sector is subject to government control, export bans are also an important driver of maize prices. While export bans increase domestic supplies of maize (which is typically the government’s stated objective), they do so at the expense of depressing domestic prices, consequently dampening incentives to improve agricultural productivity. For example, between August 2002 and August 2014, export bans were imposed during 65 of the 144 months (see Figure 1). While the bans did succeed in lowering maize prices. From the perspective of rural households, this uncertainty is of grave importance—because the value of their produce, in many cases the basis of their livelihoods, is subject to unanticipated shocks. 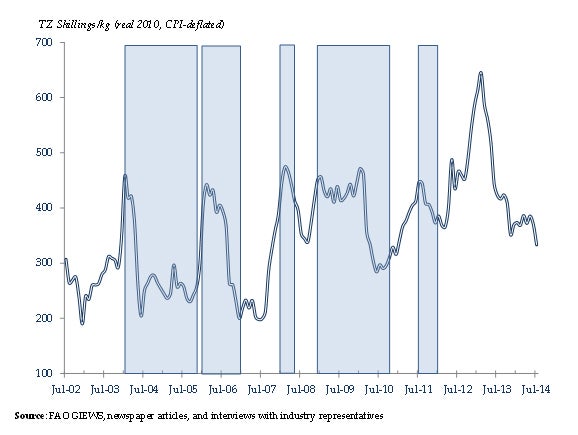 The paper finds two mechanisms that may reduce price uncertainty arising from domestic sources. First, investments that engender a shift away from primitive agrarian techniques and towards more modern production and marketing methods may partially mitigate the impact of domestic weather shocks—less than 10 percent of households in mainland Tanzania have access to irrigation and the main maize surplus area has poor transport infrastructure. Second, and perhaps more importantly, a more open trade policy regime lessens the influence of domestic shocks, especially the ones associated with weather.

The difference in monthly price changes between periods during which the export ban was effective and periods when it was not, is particularly large at the start of the southern harvest season in May (Figure 2). When the export ban is imposed and the harvest is good, it will result in a large fall in local prices at precisely the time when rural households would like to sell their produce. This is surprising since the surplus cannot be exported because of the export ban. This result highlights an even more important issue. If climate change will increase the frequency of weather disturbances, trade will become even more relevant in the future.

Figure 2 Average price change during ban and no ban periods

The study, which constitutes an early attempt to simultaneously measure the impacts of both external and domestic drivers of food prices, also provides a dynamic picture of the Tanzanian rural economy – one that may complement the less dynamic, but more granular, perspective that is gained through an analysis of household surveys.
Topics
Agriculture and Food
Countries
Tanzania
Regions
Africa The findings of the paper reconfirm what experts and people's representatives have all along tried, in vain, to convince government that export bans were counter-productive to the welfare of the majority of Tanzanians. Unfortunately, government has been more sensitive to demands by urban consumers. These are relatively more vocal and politically influential. The good thing is, finally in 2013 President Kikwete admitted that bans were bad and should be abolished. Unfortunately, another problem emerged: how to estimate expected food deficit that requires imports? The situation is complicated by the emergence of some farmers and smallscale traders with own cereals storage facilities. Being in business, they rationally withhold stocks for sale when the market price improves. Government will need to build a database of such traders and stockists to capture quantities stored if the estimate of national cereals reserves are to be as realistic as possible. Otherwise there will be a recurrence of dampening of producer prices, thus harming farmers, by over-importation of cereals as it happened in 2013 when Pakistan rice was imported and caused huge losses to local farmers and traders. The remaining question, therefore, what should be the most cost-effective and realistic approach to approximating the country's food stocks so that government dont error by importing more than what is needed to fill local deficits?

Dear Dr. Lunogelo, thank you very much for the thoughtful comment. We are glad that we are able to provide quantitative evidence in support of your case against the imposition of cereal export bans. You raise several important points. First, we are unaware of data on the storage capabilities of private traders and assemblers. Even if a survey was conducted, it is unlikely to be representative, and hence not helpful in explaining price movements. However, better information on storage would certainly provide a more accurate description of Tanzania’s maize sector and a better monitoring of its rural economy. Second, just looking at the evidence, it is unclear to us if traders and other middlemen exert a large influence on local markets. While the large price spike in the first half of 2013 is suspect, for the most part, price movements can be explained by market fundamentals - which suggests that maize markets in Tanzania work fairly well. Our concerns are more closely related to poor rural infrastructure and primitive production methods (including limited extension services and research, low yielding seed varieties, limited use of purchased inputs, etc.)  What does seem likely is that stable prices would encourage a better functioning of the supply chain. This includes entry by traders as well as greater investments in capacity for market inter-mediation, all of which may reduce the market power of existing participants. Third, the question regarding urban bias is important and relevant, but these political economy issues are beyond the scope of this study. Fourth, our view is that it is difficult, perhaps impossible, to quantify and assess all private storage. Instead the government could intervene in the event of a documented production shock (e.g. disease or adverse weather). One of our objectives in this study was indeed to understand how prices respond to such production shocks, both across markets and in the context of alternative policies.