In which countries do children have the best chances to surpass their parent’s education?

In most economies, parents would like to see their children have a higher standard of living, and with it a better life, than they had themselves. When children are asked, they too tend to consider their parents a natural benchmark to compare their economic progress against (Goldthorpe, 1987; Hoschschild, 2016, Chetty at al., 2017). A simple measure that captures this notion of progress is the percentage of children who managed to surpass their parents, which we will refer to as absolute mobility. Chetty et al. (2017) find that the United States did exceptionally well by this measure for the generations born in the 1940s and 50s, when over 90 percent of children managed to do better than their parents in terms of income. Absolute mobility in the United States has since faded to around 50 percent for the current generation. How has absolute mobility fared elsewhere in the world? In which economies do children have the best chances to improve upon their parents? Are the highest rates of absolute mobility observed in economies that are starting from a low base?

These are among the questions explored in our new global study, Fair Progress? Economic Mobility across Generations around the World, using the newly developed Global Database on Intergenerational Mobility (GDIM). GDIM provides estimates of intergenerational mobility – absolute and relative – for 148 economies representing around 96 percent of the world’s population born in the 1980s, who are the youngest generation of adults to have completed their education. For 111 economies, or 87 percent of the world’s population, estimates of mobility span five decades: from those born in the 1940s to those born in the 1980s. We focus primarily on mobility in education, since human capital is a key aspect of economic well-being and educational mobility has a strong association with income mobility. And crucially, intergenerational data on education is much more widely available than that on income. For absolute mobility, our primary measure is the share of individuals in a generation who have higher educational attainment than their most educated parent (see report). This is a measure of mobility in educational qualifications rather than skills, since it does not consider the quality of education received by individuals.

The study finds that absolute mobility varies considerably across the 148 economies (for those born in the 1980s), with a clear geographic pattern (Figure 1; darker colors indicate higher levels of mobility). Sub-Saharan Africa stands out as the region with some of the lowest rates of absolute mobility, which is as low as 12 percent in some of the poorest or most fragile economies of the region, compared to over 80 percent in parts of East Asia. Absolute mobility for the ‘80s generation is also relatively high in Europe, Canada, Latin America, parts of the Middle East, and South Africa. On the average, absolute mobility is significantly lower in developing (low- and middle-income) economies than in high-income economies (based on the latest World Bank classification). 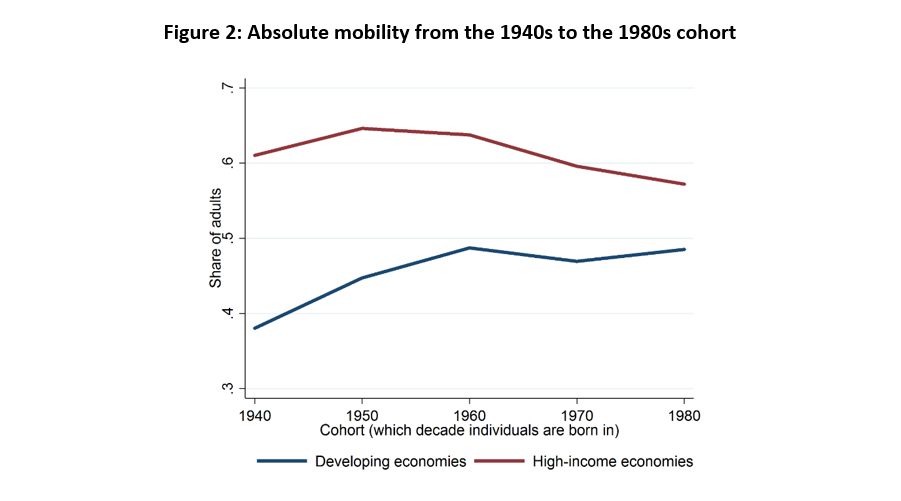 That average absolute mobility has been falling in high-income economies is not surprising – it becomes increasingly difficult to surpass one’s parents in education as tertiary attainment rates increase from one generation to the next. What is more surprising is that absolute mobility continues to be much lower in the developing world and has stagnated for the last 30 years, given that the scope for surpassing the education level of one’s parents is higher in these economies. For example, the tertiary attainment rate among the parents of the ‘80s generation in developing economies is comparable to that of the parents of the ‘50s generation in high-income economies.

In Figure 3, we plot the percentage of children who have more education than their parents against the education of their parents for the average high-income economy. As one would expect, absolute mobility (conditional on parental education) declines with parental education. If the same pattern were also to apply to the average developing economy, absolute mobility would be higher in the developing world (where parents have lower levels of education), which is the opposite of what we observe empirically. A likely explanation for this apparent paradox is the lower availability of resources, parental and public, to invest in children in developing economies. And if that is the case, individual born in poorer (and less educated) households are more likely to be constrained in their mobility, which could lead to a different relationship between absolute mobility and parental education in the developing world. 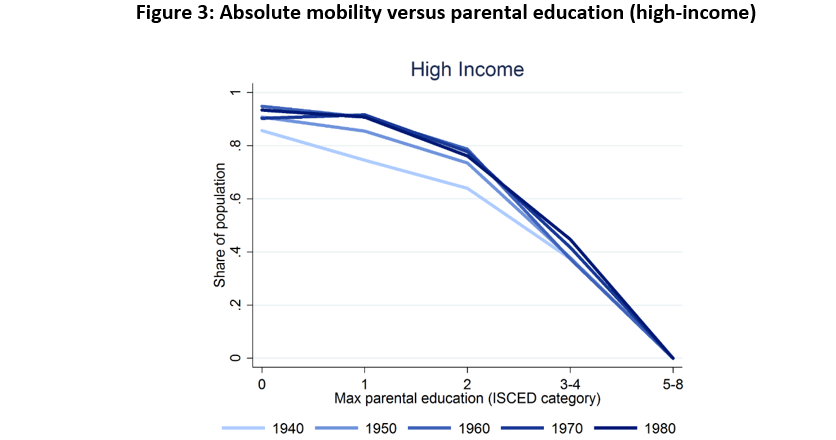 It turns out that the relationship between absolute mobility and parental education is indeed different in developing economies, more like an inverted-U than the declining function seen in high-income economies (Figure 4). The different panels of Figure 4 correspond to the average economy in each of the six different developing regions, as classified by the World Bank. The different shades of blue refer to different cohorts, with darker shades denoting younger cohorts. The inverted-U suggests that individuals with less-educated parents, who are likely to be poorer, are also less likely to be upwardly mobile in developing economies. That the inverted-U is most pronounced in the two poorest regions, Sub-Saharan Africa and South Asia, is particularly suggestive: poorer the region, more likely it is that individuals born to parents who do not have an education lack the means to get an education, which creates something akin to a poverty trap. Fortunately, this poverty trap appears to be weakening with each new generation, as the inverted-U gradually morphs into the pattern observed for the average high-income economy as regions become richer. 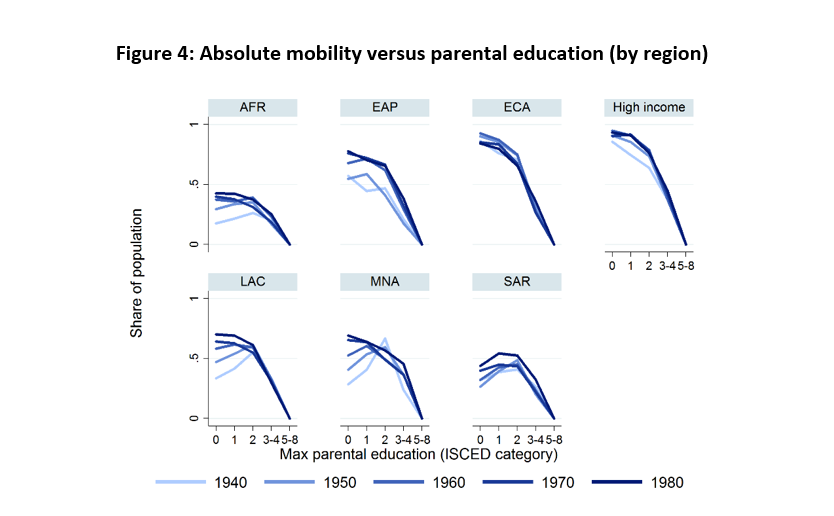 The global picture on absolute mobility in education is thus sobering, particularly for the developing world, as it has stopped rising at a much lower level of overall education attainment than in high-income economies. Behind the story of the averages are however causes for optimism. Rapid improvements from the ‘50s to the ‘80s generations occurred in the developing regions that are primarily middle-income – East Asia and Pacific, Latin America and Caribbean, and the Middle East and North Africa – to the extent that they match or surpass high-income economies in absolute mobility among the ‘80s generation. And even in Sub-Saharan Africa, rapidly rising enrollments for children born after the 1980s suggest that absolute mobility may be on the rise. These findings, along with other highlights from our global study – on topics such as relative mobility in education and income, multi-generational mobility, and the drivers of mobility – will be featured in future blog articles.