Who will feed China in the 21st Century?

A recent surge in China’s food imports has rekindled concerns about global food demand raised by Brown (1995) and about food self-sufficiency in China. According to UN Comtrade data, China’s trade in food was roughly balanced until 2008 but subsequently moved into deficit, with net imports rising to $38.7 billion in 2013. A key question is whether China will become a massive net food importer like Japan and the Republic of Korea, which rely on world markets for more than 70 percent of grain and soybean demand.

China’s rapid economic growth, at 8.5 percent average annual per capita in purchasing power parity terms since economic reform began in 1978, has dramatically changed Chinese diets. While China’s per capita calorie consumption appears likely to be approaching its peak, the composition of food demand seems likely to continue to change, as consumers shift away from basic staples and towards animal-based products. This shift to greater dietary diversity imposes greater burdens on agricultural resources since animal-based diets require much more agricultural resources than vegetable-based diets.

One way to address developments in China’s food self-sufficiency is to build up from an evaluation of the available resources, particularly land and water, using economy-wide models. A recent, high-quality, study of this type by Huang, Rozelle and Yang (2013) predicts that China will need to import feed grains and other foods for some time but that its overall food self-sufficiency is likely to remain at above 90 percent level through 2030.

To complement this modeling approach, we turn to a simple statistical model, highlighting how key determinants of food demand and supply, such as income growth, productivity growth and land endowment, interact in influencing the demand for and supply of food, and net import demand. To incorporate higher agricultural resource use associated with dietary shifts, we use resource based cereal equivalent (or CE) measures (Rask and Rask, 2011; Yotopoulos, 1985) to aggregate consumption and production of food.

On the consumption side, we estimate the relationship between CE food consumption and real income levels using data for many countries (Rask and Rask, 2011). Demand grows rapidly with income in early stages of development as consumers spend large shares of their incomes on food; continues to increase at a slower rate as consumers substitute foods with relatively high income elasticities (such as animal products) for cereals and tubers; and then decelerates as the dietary shift nears completion. We find that China’s actual CE consumption growth pattern has been very consistent with the global consumption pattern.

On the supply side, we estimate agricultural output as a function of income and land endowment, with agricultural output growing in response to the productivity growth that is associated with national output growth per person. We find that the estimated CE production curve is visually close to linear: it rises in line with income as productivity rises, although less rapidly than income because of the secular decline in agriculture’s share of national income.

China has been an out-performer on the supply side, producing much more food than its income level and agricultural land would predict. This reflects impressive efforts to increase productivity through heavy investments in R&D, rural infrastructure and other key determinants of productivity. In particular, China has achieved high land productivity relative to its current level of income through measures such as heavy fertilizer use, expansion of irrigated land, widespread use of multiple-cropping and introduction of new seed varieties and other technological improvements.

In contrast to China’s high land productivity, labor productivity in China’s agriculture remains low. Rising wages mean that labor is rapidly moving out of agriculture, creating challenges for China’s current labor-intensive agricultural production system. It is clear that farm sizes will need to continue to grow to allow improvements in labor productivity (Otsuka, 2013).

A key question is how the gap between China’s supply and demand is likely to evolve. What is clear is that, if China’s consumption continues to grow in line with global trends, and if China can maintain her past outperformance on the production side, the declining growth rate of food consumption will help reduce China’s net import demands. 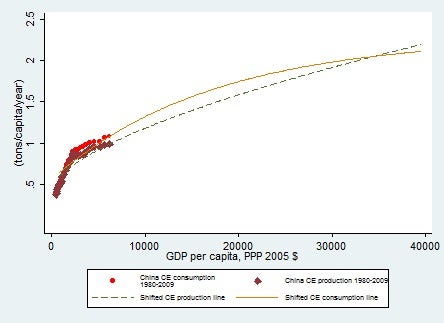 This scenario is a highly simplified one assuming that China’s agricultural resources and productivity growth can be sustained. Whether the patterns that we project are actually realized will depend heavily upon continued investment in R&D, increased mechanization, increases in farm size, and sustainable management of agricultural resources. Only if these investments are successfully made will it be primarily China that feeds China in the 21st century.
Topics
Agriculture and Food
Trade
Countries
China Do smallholder farmers have a place in this future? I would have thought that with increases in real food prices, the profitability trends for small-farms will be reversed and they will also be able to afford either owned or shared access to modern production technologies.

During the hard condition prior 1980, practically chinesse people learnt more how to survive rely on available food resource wheter plant either animal base. This people behaviour able to preserve resource capacity longer since this behaviour is not calculated on the model