Why energy poverty may differ from income poverty

There is a continuing controversy over what constitutes energy poverty and whether it is synonymous with income poverty or lack of access to electricity.  Several approaches are used to define and measure energy poverty, taking into account both demand and supply of alternative energy sources, including biomass, LPG, and electricity.  But as yet, no consensus has emerged for measuring and monitoring energy poverty and explaining why and how it differs from income poverty.

Recently, Douglas Barnes, Hussain Samad, and I developed an approach that defines an energy poverty line as a threshold of energy consumption needed to sustain life.  This approach is tested using household survey data from Bangladesh and India. The findings show that, although energy consumption rises with income, the increase is not uniform.  At the lower end of the income profile, growth in energy consumption remains flat as income rises.  Only after a certain low-income threshold is reached does energy consumption also begin to rise (Figure 1). 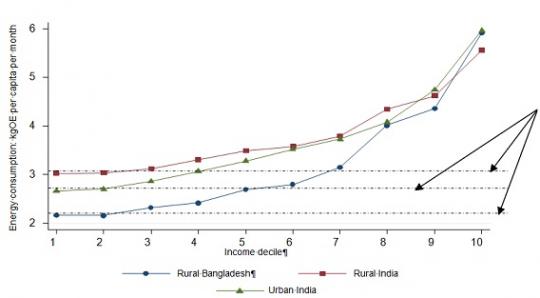 The horizontal line that captures flat growth is the energy poverty line, defined as the point above which household energy consumption rises along with income. Households that consume less energy than this threshold amount are considered energy poor.

How Many Are “Energy Poor” in India?
Applying this concept of the energy poverty line to India, we find that 28 percent of urban residents are energy poor, while 20 percent are income poor.  In rural areas, a sweeping 59 percent are energy poor, while only 23 percent are income poor.  With better access to modern energy services, as in urban India, energy consumption is relatively similar for each income decile, meaning that income poverty can track energy poverty.  In urban India, 17 percent of the income non-poor are energy poor, compared to 41 percent in rural India. By contrast, 64 percent of urban households are both income non-poor and energy non-poor, compared to only 37 percent of rural households (Figure 2).

Figure 2. Comparison of Energy and Income Poverty in Rural and Urban India 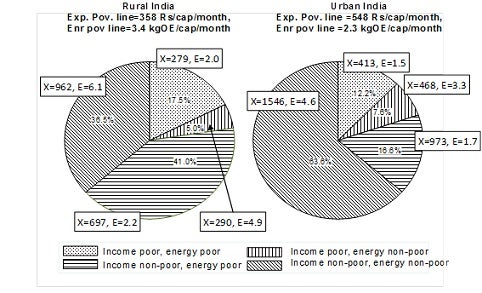 In rural India, households have limited access to modern energy but relatively easy access to natural resources, including a variety of biomass.  If they consume enough of those energy sources and use energy-efficient appliances, they may not be energy poor.  Thus, electricity connection is not necessary for determining who are energy poor.  But if rural households are energy non-poor, with abundant biomass fuels, or energy poor, despite having abundant biomass fuels, then they must deal with such issues as resource depletion and the health risks associated with burning biomass energy in open fires or traditional stoves.  Thus access to energy services matters, as does the efficiency of energy consumption.

This means energy consumption must be properly weighed to determine the energy consumption basket to measure energy poverty.  Similarly, simple access to modern energy, such as electricity, does not ensure households are energy non-poor.  How much they consume and whether the electricity supply is reliable are also key factors.  Energy poverty thus depends on access, efficiency, pricing, and reliability.

Why Does Energy Poverty Differ from Income Poverty?
Both income poverty and energy poverty are expected to decrease along with increasing household income, but the pattern may differ by income decile and geographic area.  In rural India, the gap between expenditure on food and non-food items (including energy) and energy poverty is wide and consistent for all income deciles, but is much smaller in urban India (Figure 3).

Figure 3. Expenditure and Energy Poverty in Rural and Urban India 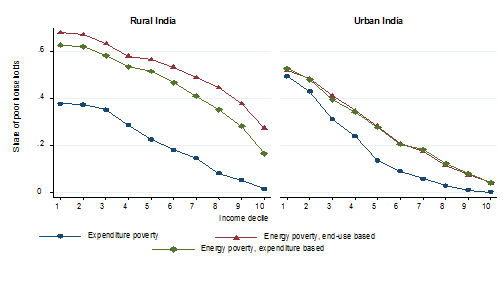 This is indeed a very insightful yet crisp piece. I have personally found that Climate and energy issues are often difficult to communicate to the decision makers and the masses. This sort of study must be brought to the fore. Establishing a Energy Line will certainly help in helping to make governments more accountable to ensure that people have attain the status of energy non-poor, thus ensuring a reliable and cost-effective supply, sustainable local energy resource management,and create a market for energy related services.