Broadband Affordability - We're still not there yet


A year and a half ago, I published a post on broadband affordability that basically took the benchmark of 5% suggested by the Broadband Commission and applied it not only to average income per capita, but to income per capita per decile of population. That is, the main idea was that broadband price would need be at or below 5% of income per capita for the lowest decile of the population to be considered affordable for a whole country.

Since then, several reports that touch upon the relevance of broadband affordability on development have been released, including the World Bank's World Development Report 2016 (WDR), and the 2015-16 Affordability Report by the Alliance for Affordable Internet (A4AI).

The WDR makes a compelling case for broadband rollout, and highlights its potential impact for economic growth. The report focuses on the need for "analogue" policies that complement access. These policies will ensure broadband indeed translates into shared economic growth: an updated competition framework for the digital age, transparency and accountability policies, and provision of the necessary skills among all segments of the population. It also highlights the potential adverse effects that broadband may produce without these complements: market concentration, power imbalances, and increased inequality, respectively.

The A4AI report, has done a great job gathering information from many countries. The report calls for an updated definition of "entry-level broadband" as a pre-paid 1GB data plan (note the emphasis on the amount of data rather than the speed at which users can access said data). Additionally, they also recommend that in order to be considered affordable, entry-level broadband plans ought to be at 2% or less of GNI per capita.

In this context, I have updated the information I used in 2014. The data I'm using comes from the World Bank's open data page, data.worldbank.org and the World Development Indicators' page on Information Society. The map above shows the estimations of population that can't afford broadband in 145 countries, applying the same methodology I used previously (a detailed explanation is included in my previous post). I have kept the benchmark at 5% of income per capita per decile.

In total, this analysis suggests that the total number of people that can't afford broadband services has dropped around 10% in one year from about 3.5 billion to 3.1 billion. Some regions have dropped more than others, as the following graph shows: 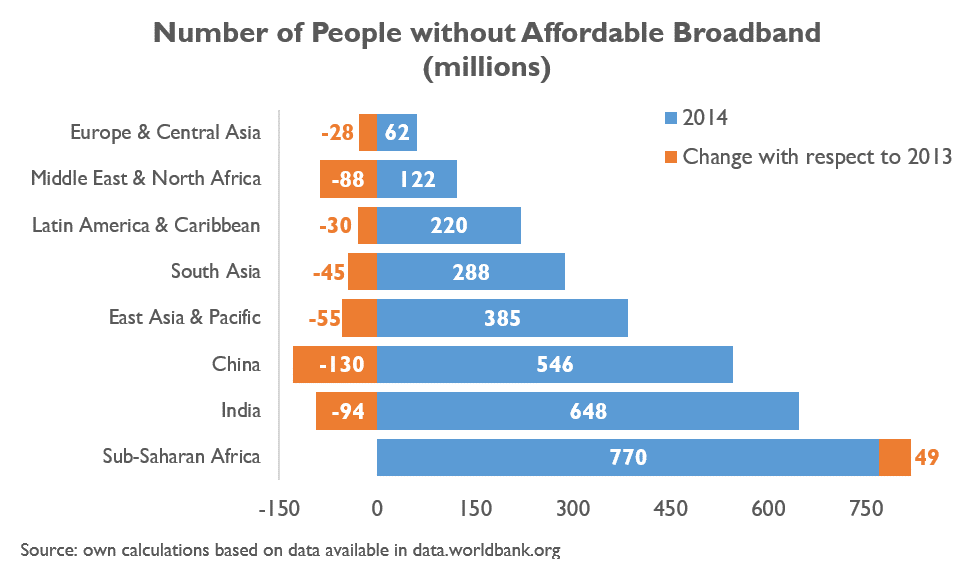 In the case of Sub-Saharan Africa, population increase exceeds the little (if any) improve in affordability, resulting in an overall increase of the population without affordable broadband. Moreover, despite overall reduction, countries in other regions have also seen an increase in the share of population that can't afford broadband (Philippines and Argentina, for example).

It is important to understand the limitations of this analysis. Among others, the ones I think are worth noting are: (i) the definition of broadband used for the pricing information is different from what has been suggested by the A4AI; (ii) basket prices are those reported to the ITU, which in some cases are probably post-paid promotion packages which are usually lower than pre-paid packages and not eligible for the lower income segments of the population; and (iii) income distribution in some countries are very outdated.

The original objective of this analysis was to make a case against setting benchmarks on averages. Lowering the bar to 2% of GNI per capita as suggested by the A4AI is a great improvement, but even this is still too high in some countries to consider it affordable for all (for example, 2% of total GNI per capita in Bolivia is equal to 22% of the GNI per capita for the lowest decile).

Finally, last year I received several questions on the methodology I used. This year I have created the database using a program in R that reads the data from the World Bank's open data API. The program is available in GitHub. I welcome any comments or suggested changes, as I still consider this a work in progress. The github repository also includes the table that is generated by the program and used for this post.