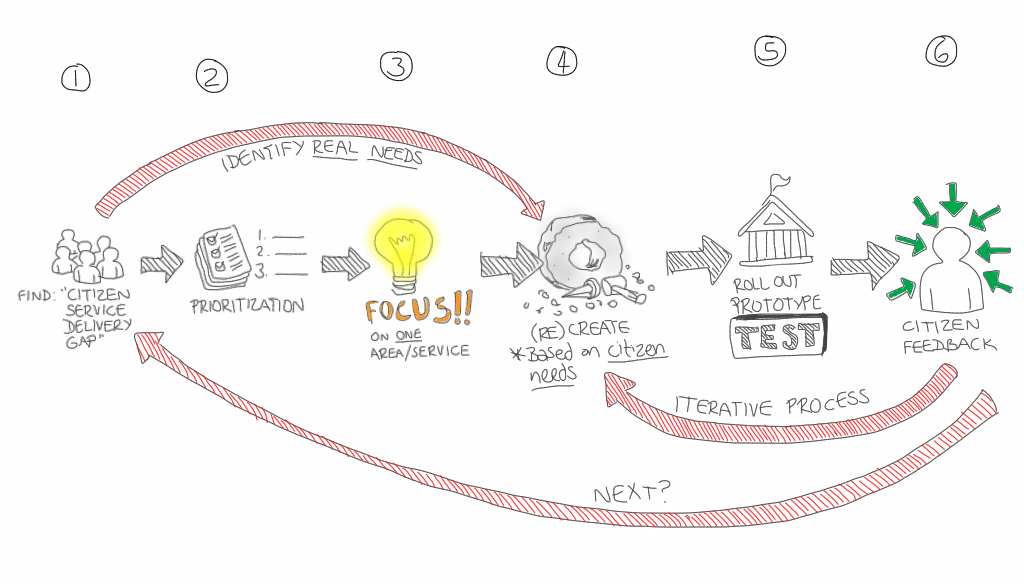 As part of our proposed framework on Building Smarter Cities, a set of activities aimed at creating "bottom-up" innovations have been proposed. These activities are aimed at leveraging existing technologies to solve current citizen problems. In order to do so, Design Thinking needs to be integrated into the process, which allows for constant learning, iteration, and a solution that is co-created by the users themselves. This, however, is often difficult to do in government projects. (I wrote a post some time ago about the challenges that Design Thinking poses on government).

The proposed process for engaging in these “bottom up” activities is shown above.  An innovation team within governments and/or cities will be tasked with leading these co-creation exercises, with active participation of academia, private sector, government, and citizens at large. Our proposed process consists of six clearly defined stages, as described below:

Many times we have seen solutions looking for problems, and not the other way round. For a solution to be truly effective and sustainable, the process of co-creation by citizens needs to start with the identification of a need or problem faced by citizens. In technical terms this is a difference between the service level that each citizen should receive and the one she currently receives (if at all), referred to as the "Citizen Service Delivery Gap".

The process of identifying such needs is not necessarily an easy task. Of course there are basic ones, layers of quality of service improvements that are easily identified and would have a large impact on service delivery. But then there are other, unidentified and unrealized, opportunities for service delivery. As Professor Mikko Koria from Aalto University calls them, the “unknown unknowns”, problems or situations we are not even aware we don’t know about.

For the latter, some consultancy firms have developed a whole set of tools, including for example the Human-Centered Design Toolkit, developed by IDEO (available for free here).

Most likely, policy makers and citizens will come up with more than one (probably many) needs that require attention, many citizen service delivery gaps identified. Governments or local authorities would then need to prioritize them in order to focus. Prioritization criteria would ideally be based on potential impact on citizens, but given the context and the actual problems other criteria such as (perceived) easiness to solve (both in terms of processes and budget), alignment with current programs within the government, etc. could also be added. Moreover, for the first couple of rounds, government officials should try to prioritize so-called "low hanging fruits", that is, problems that require little investment and may provide high satisfaction with citizens. Creating an app for public transportation route planning, or social media channels for citizens to report on infrastructure projects are usually examples of such initiatives (when needed). Solutions to this kind of problems provide local authorities with higher flexibility when trying to tackle more wicked problems.

At this stage, the identified problem ought to be clearly defined. This somewhat obvious step is sometimes necessary to emphasize as public officials (or their priorities) may change.

At this point, a first concept for a solution to the identified problem should be developed. This process should be centered on satisfying the needs that were previously identified. For this, it is useful to remember that many times old solutions can be effectively applied to new problems. Adapting something that has worked elsewhere (in terms of geographic location or sector) can very well become a valid solution to the problem at hand.

For some clearly defined problems that can be solved with technology, events such as a hackathon (for a good description of what a hackathon is check this publication) can help find concepts and even early prototypes. Other events such as app challenges can put more emphasis on the actual creation of an early prototype / proposed solution that can be tested with potential users. Alternatively, several resources provide more specific methodologies for prototyping and concept creation.

Once the prototype is developed, it should be tested. The exact extent of the roll out definitely depends on the actual problem and the specific prototype, but we recommend a living lab approach, that is, testing it with actual citizens and consumers in a real world environment. This allows for more insights in terms of their interaction with the prototype and observing other variables that are not considered in a more controlled environment. Especially in the case of services, testing prototypes in real world environments is very useful in terms of the user experience and feedback.

Citizens that use the prototype should provide feedback about their experience using the service, and their feedback should be taken into account for next iterations of the proposed solution. Of course the underlying assumption is that the first prototype will not automatically become the final version of the service, and that is true for most cases. Even the simplest innovation in service delivery will benefit from a cycle of testing-feedback that will allow citizens to test the proposed service/innovation and provide feedback on their experience. This feedback should then be used to improve the service.

The last three steps should be repeated, improving the proposed solution based on feedback received from potential users, until the identified issues are fully addressed. This iteration is critical, as it allows for improvements based on actual usage by citizens.

To drive this proposed process, an innovation team needs to be established. There are good examples of such outfits at the national level (government innovation labs such as Nesta in the UK) and at local level (urban living labs such as Forum Virium in Helsinki). These entities have embraced a culture that allows for rapid prototyping and "fail safe" environments where the testing and prototyping of bold ideas is allowed (in fact, it is failure during the early stages of prototyping what allows for a better outcome, in collaboration with early adopters that provide useful and meaningful feedback).Teams like these should be constantly looking for citizen service delivery gaps and then propose solutions that are co-designed with citizens through feedback in an iterative process.

It is important to note that this proposed approach does not differ from the one applied in many cases by the entities mentioned above. However, we did find it useful to propose a more structured approach as we start to interact with less experienced authorities that would want to adopt such methodologies for government service innovation.

We’d like to hear comments to this proposal. You can send them through the comments box below or (if less than 140 characters) to @n0wh3r3m4n.

*Thanks to Naomi Halewood and Merrick Schaefer for valuable contributions to this post. I really like the graphic and the clear process thinking! The idea of focusing on a "real need" versus a "sexy" project that earns politicians "bragging" rights makes sense and is a real balancing act in some of the environments we work in (Asia Pacific & West Africa). One of the approaches we are using is pushing governments to build the infrastructure platforms that will allow a broad range of stakeholders to create solutions and address the "unknown unknowns". This would initially be entrepreneurs and apps developers but eventually could crowd sourcing. While there are basic services that government must provide, we need an environment where citizens could initiate or enable services without having to wait or depend on governments.

Thanks for this graphic arturo,
I've been pointing at it on quite a few "gov" sites. Along wuth the question "if we're moving from a representative (delivery), to a participatory (co-creation) form of government, why do we always start at Stage 4?
One thing which I'm tryin to encourage is this focus on the Single (levels) of Sign on, to a(n institutional)network, by insiders and outsiders. http://standards.data.gov.uk/challenge/standard-attributes-level-service
It is the Stage one for every institution.