The 2016 World Development Report: Digital Dividends, the World Bank’s flagship report launched on 14 January 2016, presents a policy framework to assist governments in making the best use of information and communication technologies (ICTs) for development. Specifically, the policy framework, presented on the page 206 of the report, shows how policy interventions in the areas of market competition, public private partnership and effective regulation can help in addressing the digital divide and enhancing connectivity. The policy framework is structured around actions in the first mile, middle mile and last mile of the network as well as in the intangible parts, labelled the “invisible mile” (see “How networks are built”). 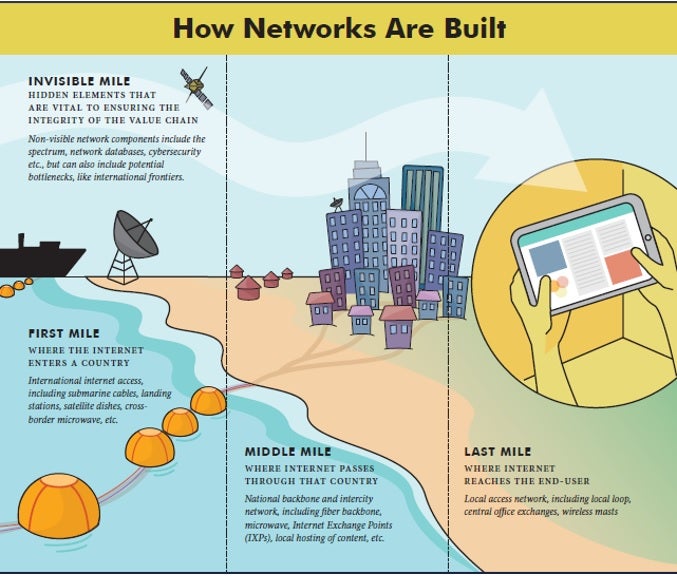 So how could this policy framework be applied in one of the World Bank’s programs of technical assistance and investment lending? The Bank’s work in the Union of Comoros, a small island developing state (SIDS) in the Indian Ocean, provides a good example. In Comoros, the Bank has been deploying a US$22m credit from the International Development Association (IDA) under the Fourth Phase of the Regional Communications Infrastructure Program (RCIP-4), a project which kicked off in late 2013. In some ways, Comoros is a relic of how many other countries looked in the 1980s and 1990s. It is one of only a handful of countries – the others being Djibouti, Eritrea and Ethiopia – that have retained a state-owned monopoly service provider for telecom services, in this case Comores Télécoms. That was the market environment in most developing, and many developed ones, until relatively recently. As such, the most urgent policy intervention for Comoros are situated in the top left of the policy matrix; introducing competition in the provision of “first mile” access to the internet. But actions have been undertaken, or assistance provided, in virtually every cell of the matrix (See “Policy Matrix”). Comorian citizens have very limited access to the internet at present, mainly because the price is so high and the capacity constrained, and the mobile penetration is only half that of Kenya, which has a similar GDP per capita.

Another important step has been the development of public private participation (PPP). Telma will introduce private capital into the sector, but Comores Telecoms remains in state ownership. The IFC, the private sector arm of the World Bank Group, had been invited to assist the Government in privatizing Comores Telecoms, but this process had been opposed by the Parliament, afraid of the effect of potential redundancies ahead of Presidential elections to be held in 2016. Comores Telecoms, with over 2,000 employees, is the biggest employer on the island, But many people gain a supplementary income from the ICT sector, for instance agents that offer the sale, or transfer, of credit for mobile phones. The latter will increase greatly with the introduction of competition, though the former may shrink.

In order to facilitate the development of competition, and in lieu of full privatization of Comores Telecoms, a new public private partnership (PPP) structure has been created. The fiber optic network assets of Comores Telecoms (the EASSy and FLY-LION3 undersea cables and the inter-island network) have been hived off into a new company, Comores Cables, which is jointly owned by Comores Telecoms, Telma and the Government. It will operate at arms-length to its owners, engaging only in the wholesale market not in the retail market (i.e. selling to mobile operators and ISPs, not to end-users).

The third element of the policy framework, after competition and private sector participation, is effective regulation. Around 15 per cent of the funding from RCIP-4 is dedicated to creating an enabling environment and support for ANRTIC (Autorité Nationale de Régulation des TICs), the ICT regulator. This has involved support for preparing the new law, issuing licenses to the three operators now present in the market, liberalizing the ISP sector and managing the spectrum. Under monopoly, ANRTICs role was largely ceremonial, but in the new competitive environment, it will play a critical role in ensuring a level playing field. The Bank has provided training and technical assistance to ANRTIC to allow it to grow into its new role.

The main chunk of IDA financing is a new undersea cable, FLY-LION3, which will link the Comoros with Mayotte and Madagascar. This is significant not only to the Comoros islands, but to the region as a whole as it will interlink two other international cables – EASSy and LION-2 – as well as the domestic networks of the three countries (see map). As such it will create resilience in a region of the world where cables are affected by undersea volcanic activity

The new World Development Report demonstrates the transformational impact that ICTs can have. Few countries in the world need that more than Comoros, where there are few natural resources and where isolation from international markets slows economic and social development. The challenge is to convert the digital divide into digital dividends. That is badly needed in Comoros.

The views expressed in this article are those of the author and do not necessarily engage the World Bank or its membership.​