Identification for Development: Its Potential for Empowering Women and Girls

Widespread lack of official identification (ID) in developing countries disproportionately affects women and girls, who face more and higher barriers to obtaining IDs. As economists at the World Bank Group, even we hadn’t immediately appreciated the enormous deprivations facing girls and women who lack official identification. These barriers include: restrictions on women’s freedom to travel outside the home or community; distance; financial cost; time constraints; illiteracy; lack of information and lack of awareness; and, lack of support or opposition from other family members. 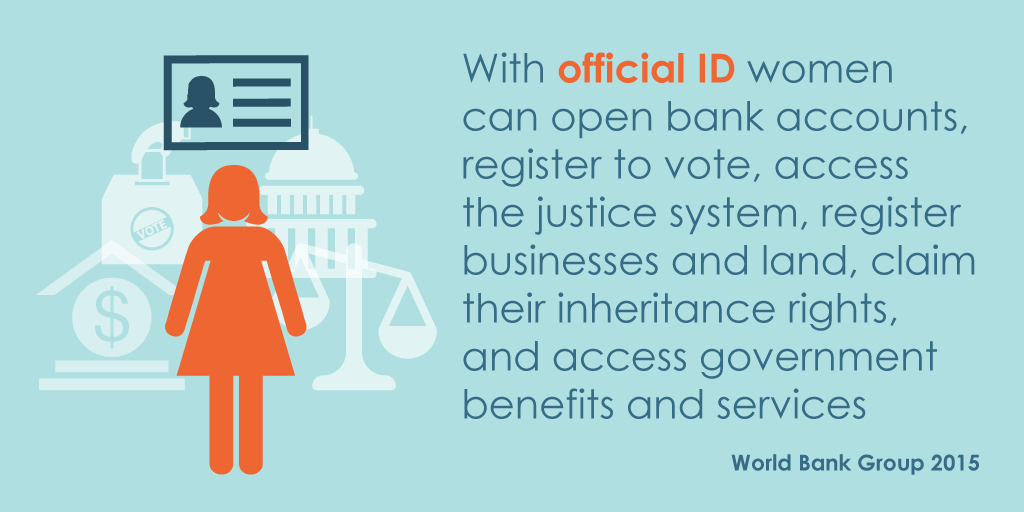 Missing birth registration certificates, often needed to obtain an ID, and other missing documentation hamper numerous daily activities: access to services such as social protection, education, and health care; entitlement claims; access to financial institutions, credit, and other economic opportunities and enablers, including many jobs; family and property transactions requiring certified individual legal status; and the exercise of basic citizenship rights, such as voting and participating in politics.

Among the recently agreed Sustainable Development Goals (SDGs), Goal 16 aims to "promote peaceful and inclusive societies for sustainable development, provide access to justice for all, and build effective, accountable, and inclusive institutions at all levels." To track progress toward meeting this goal, SDG16.9 sets the following target: By 2030, provide legal identity for all, including birth registration. Sharply scaling up efforts to meet this goal is especially vital to achieving Goal 5, "Achieve Gender Equality and Empower Women and Girls."

Jobs and assets are key levers of change for women in their communities and economies. Goal 5 aims to fulfill women’s equal rights to economic resources including access to and ownership and control over land and other forms of property, and inheritance. But this will require vastly more women to possess official proof of identity.

A recognized proof of identity is further needed for women to access financial services, including compliance with know-your-customer requirements. Global Findex shows that worldwide, 42 percent of women are unbanked compared with 35 per­cent of men. While lack of sufficient funds is the most commonly cited reason reported by more than half of unbanked adult women, nearly one in six unbanked female adults says lack of documentation is one reason she doesn’t have a bank account.

New technologies can ensure women can claim services to which they are entitled, such as social protection services, another target under Goal 5. A unique, digital identifier (digital ID) can ensure that benefits meant for women such as conditional cash transfers reach their intended recipients. In Pakistan, for example, the use of biometric IDs is a precondition for access­ing cash transfer programs, ensuring that payments to female beneficiaries are delivered directly to them rather than to their husbands or brothers, as occurred previously. Actions taken to overcome objections from male members of the community to women’s registration included setting up women only registration centers with all female staff.

By 2012, 40 million women in Pakistan possessed a Computerized National Identity Card, and program managers report significant empowerment effects for women, such as having a new sense of individual identity, exercising the right to vote, and enjoying legal protection as registered citizens of the country.
Achieving equal opportunities for women’s leadership at all levels of decision-making in political, economic, and public life is another target for Goal 5. While requirements for voter ID vary among countries, women are often sidelined from any electoral process if they lack a recognized form of ID or voter card.

One striking example comes from Burkina Faso, where, to obtain a birth certificate, citizens must have two wit­nesses, such as their mother or a midwife, to vouch for their birth in the country. But many women leave their birth villages when they marry, and returning to find witnesses can be a daunting task.

Burkina Faso is one of the world’s poorest countries, and for a woman to leave her village for an entire day to accomplish this can cost more than she can afford. Moreover, survey data for Nepal show women are twice as likely as men to lack legal identification: Intra-household comparisons show daughters-in-law are the adults least likely to possess citizenship documents.

More national data are needed to understand how gender-specific barriers play out at the country level. While some information is available about poverty and other barriers, little sex-disaggregated data on possession of ID documentation exists. Rural, conflict, or post-conflict contexts often comprises additional challenges because of factors such as displacement or lack of documentation at the time of birth.

Providing unique identification to the millions of undocumented adult women and men is perhaps the most pressing need and greatest challenge. For women, especially among socially excluded groups, social and cultural norms often make these constraints especially steep.

Global initiatives such as Identification for Development (ID4D) promote opportunities to provide women, men and children with access to foundational documentation such as birth certificates as well as expanding other ways to establish legal identity. A recent ID4D publication urges the international development community to identify and address legal and financial barriers and social norms that create specific obstacles for women to registering their children and themselves. To achieve SDG 5, it can hardly happen quickly enough.