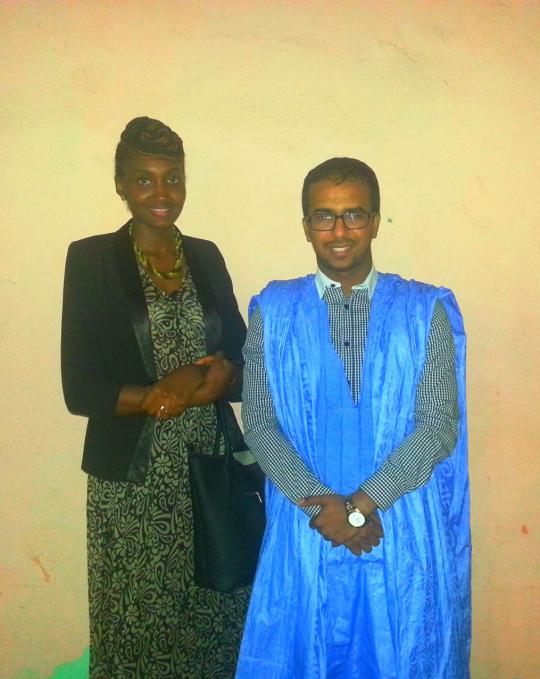 According to Mariem Kane (left) and Adi Ould Yacoub, ICT is one of the biggest solutions to the problem of youth employment in Mauritania, their country.
Whenever I visit Nouakchott – the capital of Mauritania – I am told that mobile communications are perfectly suited to the nation's nomadic people, covering areas where there is no fixed network, such as along rural roads or in the dunes where families retreat on weekends. I am also told that the mobile broadband Internet, when it becomes available at more affordable prices and better service quality across the Mauritanian landscape, will be heartily adopted by the population – especially for sending pictures and videos as well as accessing the content available on the web. Mobile technology is already well-supported in the local market: ordinary citizens can get their smartphones or tablets repaired at the "Noghta Sakhina" (Hot Spot) in Nouakchott.

But when I am in Mauritania, I rarely hear about the opportunities that Information and Communication Technologies (ICT) can bring in terms of jobs – particularly jobs that require the creativity, innovation and radical new ways of collaboration, interaction and learning that provide professional growth for the nation's youthful population. We are increasingly able to see that young people around the world have remarkable individual capacity to code and develop solutions for applications, including mobile solutions, which dramatically improves their job prospects demand grows for the development of multilingual content on global broadband networks.


On April 28 in Nouakchott, my colleague Isabelle Huynh and I presented new types of jobs made ​​possible by ICT. Our presentation took place during a workshop sponsored by Mauritania's Ministry of Employment, Vocational Training and ICT and moderated by Dr. Houssein Ould Meddou, president of the Union of Mauritanian Journalists. We gained insight into how Mauritanian youth are preparing for ICT-related jobs in the face of severe unemployment across their country – 48 percent for women between the ages of 25 and 34, and 36 percent for men the same age. Among the young people who believe in ICT as a viable employment solution are Moustapha (Adi) Ould Yacoub and Mariem Kane.

Adi is the founder of Mauriandroid, which brings together the best of Mauritania’s young developers in the country's Android environment. He is a 27-year-old computer scientist that studied in Tunisia, where he became acquainted with the developer community concept. When he came back to Nouakchott, he co-founded Mauriandroid with fellow students. The company has already successfully participated in the African Android Challenge.

Adi ranked second at the Samsung-Tunisie app competition – the only Mauritanian national among 300 contenders. During the competition, he put forward a simple yet powerful idea, backed by a fully coded prototype app. When he presented the prototype, the jury was thrilled. The idea was to help bring together persons who are eager to donate gently used clothes and toys, secondhand ICT equipment, food and other items with charities and non-govermental organizations (NGOs) that are in need of donations.

Mauritania's young developers are also discussing the potential of apps related to the commercial activities of Mauritanian enterprises (e.g. tourism, restaurants and transport), as well as applications that help support development projects in sectors including agro-pastoralism and fisheries. Adi has many more projects and bright ideas in mind: he founded the Google Developers Group in Mauritania, is teaching free computer science classes to students and is exploring mobile banking solutions with a group of young entrepreneurs.

Mariem Kane is also convinced of the potential of ICT-related jobs in her country. She is a 29-year-old network engineer who started her career in France, and then came back home to work at a local telecommunications firm. She knows ICT very well.

After “Youth, You are our Hope” – a meeting of approximately 400 young people with the President of Mauritania earlier this year – Mariem decided to take an active role in shaping the country’s economic future by founding a group called “Mauritanian Youth and ICT,” which engages with sector stakeholders to create a more favorable environment for ICT-based innovators and entrepreneurs. She specifically notes that youth would welcome an ICT incubator in Nouakchott to boost applications, service and content development in the country. Mariem's talent and commitment to the development of a digital economy in Mauritania have been acknowledged; this year, she was selected to participate in the U.S.-sponsored “Young African Leaders Initiative.”

How can we support Adi, Mariem and their fellow young men and women? First, by supporting their initiatives now! During the workshop, telecommunications firms praised Adi and Mariem. M. Mhamed Waled, president of  the largest Mauritanian business association (Fédération des Services et Professions Libérales (FSPL)-Union nationale du Patronat Mauritanien), announced that he is willing to sponsor a “hackathon” or an app competition in Nouakchott in the near future.

December 2014, will mark the two-year anniversary of the completion of the new submarine cable Africa Coast to Europe (ACE), which has drastically improved broadband connectivity in Mauritania. Why not take advantage of this anniversary and have various ICT firms organize an event in Mauritania? In addition, this Fall the Government of Mauritania will initiate a feasibility study (financed under the WARCIP Mauritania project) to set up a technical building to host an Internet Exchange Point and Datacenter close to the University of Nouakchott. Why not involve the “Mauritanian Youth and ICT” group to explore the needs of youth and find ways to host an ICT incubator in this technical building?

Second,  we can support youth through specialized Mauritanian job search websites (such as Beta Conseils or Emploi Mauritanie), as well as a typology of ICT-related job profiles most needed on the marketplace (e.g database administrator, network administrator, helpdesk technician). This will allow university and other training institutes to develop suitable curricula, as well as give companies a more systematic manner of offering jobs or internships. ICT-related jobs are in constant evolution, hence the need to constantly ensure that the profiles of young graduates meet the needs of employers.

Third, we must deepen the key reforms required to improve the labor regulations for the formal sector and the overall regulatory environment (see the Doing Business ranking) and create a more favorable business climate in Mauritania.