Mobile phone credit instead of bread? For many Kenyans, a real dilemma

What would you give up to continue using your mobile phone? For most of the six billion mobile subscribers around the world, the sacrifice might be measured in terms of a marginal loss of privacy, or of time. But in Kenya, where mobile handsets are widely used among base of the pyramid (BOP) users living under the poverty line, the sacrifice might cut deeper, as highlighted in a recent article in The Economist. 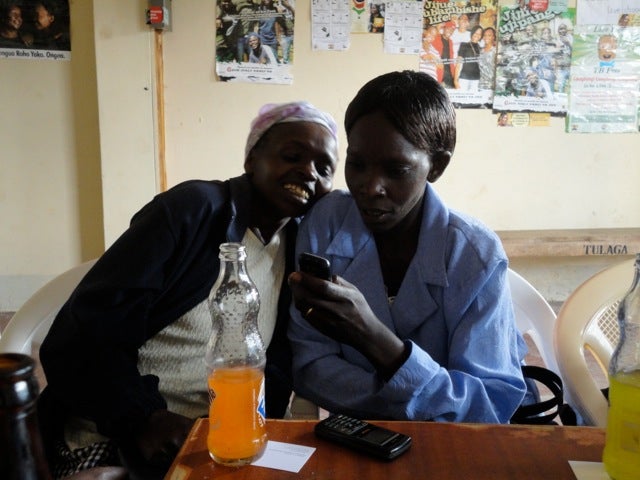 A new infoDev study, carried out by iHub Research and Research Solutions Africa among 800 mobile users in six locations across Kenya1 living on less than US$2.50 per day, found that at least 20 per cent of respondents felt it was necessary to make real sacrifices to recharge their mobile credit. In the majority of cases (>80 per cent), that meant buying less food, at least once a week. New clothes, bus fares, utility bills and even soap were sometimes sacrificed to sustain the all-powerful mobile phone. As one respondent put it, “Better you miss to eat … at times you miss to eat and you have credit”. The research, the first systematic study of mobile use among the poorest Kenyans, confirms earlier conclusions of other investigators that BOP users are willing to spend up to a quarter of their household income on mobile phone charges (Hystra et al, 2011) and to go without food in order to stay informed and entertained (Banerjee and Duflo, 2007).

The Kenya case study is part of a large, multi-country research commissioned by infoDev, a global partnership program of the World Bank focusing on technology and innovation, about the use of mobile phones at the “Base of the Pyramid” (living on less than US$2.50 per day). What’s new about this research (based on detailed questionnaires, focus groups, and diaries) is that it puts an estimated figure on the value of the sacrifice, an average of around 72 Kenyan shillings per week (around 84 US cents). That may not sound a lot, but when you’re living on so little, it amounts to more than ten per cent of income that is being reallocated. Interestingly, the quarter of respondents reporting that they make such sacrifices is around the same as the number of respondents who reported relying on their phones for making money. A third reported using their phones for replying to casual job offers and almost half used their phones in their work, usually in the informal economy, such as selling clothes or food, or offering professional services like hairdressing. For these users, the most desirable feature of their phones was that it makes them more “reachable”. In a fifth of these cases, they also used their mobile phone directly to receive money, using M-PESA, or a similar mobile money service, to conduct the transaction.

The mobile phone revolution is only getting started in the developing world, as a billion new mobile phone subscriptions were acquired in the last two years and as users upgrade existing phones to smarter models that enable them to download applications and use the Internet, as underlined in the 2012 World Bank, report, Maximizing Mobile. But Kenyan BOP users are already proving to be quite sophisticated in their use. Among those interviewed, some 30 per cent indicated that they have multiple subscriptions, allowing them to play off the special offers of one service providers against another, and to benefit from lower on-net calling prices. As many as one in four of mobile phone owners at the BOP reported that they use their phones to browse the Internet, while other common non-voice and non-SMS usages included credit borrowing, mobile money transaction and “call me back” messages (see chart below). More than a quarter of the BOP respondents said they would use their phones to access educational and health information if it were available and affordable. On the whole, there is no significant gender divide around how Kenyan BOP users use their phones, though Internet users are slightly more likely to be young males.

The study is intended to help in understanding usage patterns and developing services and applications that better respond to BOP needs, including through the network of mobile applications labs (mLabs) that infoDev is establishing around the world, including in Nairobi. The research has benefitted from funding from UKaid and the Ministry for Foreign Affairs of the Government of Finland.

1 This non-random study did not aim to be representative of the entire Kenyan BoP and specifically interviewed mobile phone owners or those who had previously owned a mobile phone. The 6 locations in Kenya were purposefully chosen based around sites where mobile applications are being piloted. In addition, data was sourced from a household survey carried out by Research ICT Africa! Into 2’000 Kenya households that were randomly selected. 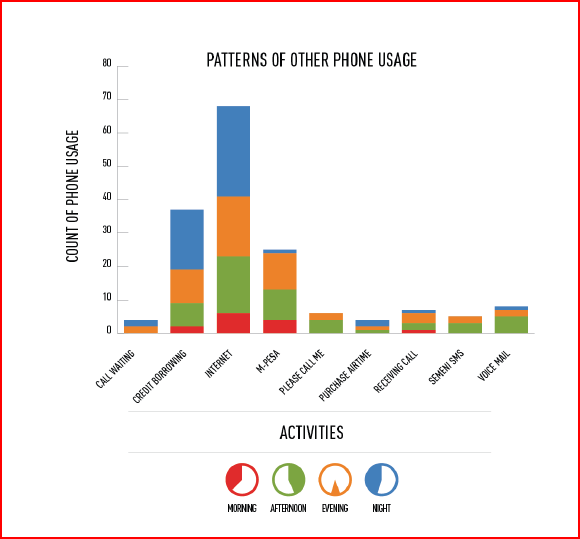 Note: Based on 157 BOP respondents who recorded their usage patterns over a four-day period using diaries. “Semeni SMS” is a service for organizing and broadcasting SMS messages to groups of users.

This article was prepared by Tim Kelly (World Bank) and Angela Crandall (iHub Research). Other sources cited include:

Banerjee, A.V. and Duflo, E (2007) “What is middle class about the middle classes around the world?, available at: http://economics.mit.edu/files/2081

Hystra (2011), in collaboration with TNO “Leveraging ICT for the Base of the Pyramid”, available at: http://www.hystra.com/opensource/ICT_for_the_BoP.html.

infoDev (2012) “Mobile Phone usage and the Kenyan Base of the Pyramid”, report written by iHub Research and Research Solutions Africa, forthcoming at www.infodev.org.

The Economist (12 November 2012) “Vital for the Poor: A report describes the sacrifices the poor make to keep a mobile phone”, available at: http://www.economist.com/news/middle-east-and-africa/21566022-report-describes-sacrifices-poor-make-keep-mobile-phone-vital?fsrc=scn/tw_ec/vital_for_the_poor. hallo great work guys .i look forward to seeing a research on the use of mobile phones and other digital devices by youth in rural kenya .in our village i see cheap internet phones with youth using bluetooth,memory cards and ringtones wit some accessing internet with some ease. motorcycles have small players with small speakers that play music. there's alot that they are learning peer to peer that's quite fascinating.

I studies the uptake and increasing utility of ICTs in geographical area from a user’s perspective. and that i presently a pursuit Manager at iHub and conjointly co-lead of Waza expertise, AN iHub community initiative geared toward prompting under-privileged youngsters to explore innovation and entrepreneurship ideas grounded in real-world expertise. Its really nice for us...