Replacing a Three Day Walk with the Push of a Button

Madagascar is big—it’s the fourth largest island in the world, more than twice as big as the United Kingdom. Madagascar’s size, its tropical climate, dense forests and steep hills, combined with a lack of money for infrastructure deployment and maintenance, means there are isolated pockets of people all over the country without easy access to cities, to information, to the world.

Until recently, mobile and communications services were confined to a few, mostly urban, areas. That left people living in rural areas cut off. When we were in Madagascar, working on this project, we saw many rural communities in dire need of essential infrastructure and services. People in some villages live far from any road, or rely on dirt tracks that turn to impassable mud ways in the rainy season, without access to electricity, hospitals, or banks.

So, in this environment, access to mobile communications cannot be considered a luxury anymore—it’s a vital service that overcomes physical barriers and infrastructure gaps. With mobile service, people can contact family members in case of an emergency, call for medical help, and transfer money via their cell phones.  Farmers—a large majority of the country population works in agriculture, and especially the poorest—can use the internet to check market prices for their produce, or get information on fertilizers.  Schools with connectivity can reach the world, giving students access to information ranging from Victor Hugo’s novels to Fermat’s last theorem. Phones can be vital tools for health and well-being.

To connect some of the most isolated populations, the government of Madagascar partnered with the World Bank to build a new large telecommunications network of more than 60 communications towers in three remote parts of the island. One of the most difficult challenges of this project, and retrospectively one of its biggest successes, has been establishing an effective public-private partnership. Gathering competitors in the private sector with public authorities, to combine their expertise and share the investment burden, is, in fact, the only way to bring telephone and internet services to these very poor, remote areas of the country.

One of the other things we are very happy to see come out of this project is community participation. The second big success in this story is the active participation of the local populations at all stages, maximizing the benefits and keeping key beneficiaries focusing on the project. For instance, locals were hired in many localities to bring in materials and participate to the construction work.

These communications towers provide greater reach for telecommunications networks and are having an impact on the 2 million more people that they reach. We saw women, in an isolated village, take pictures of the mats and bags they wove out of raffia, and send those pictures out to potential buyers. We met teachers who, instead of walking to pick up their paychecks, can use mobile banking to get easier and faster access to their money. In both these instances, connectivity opened up the world. 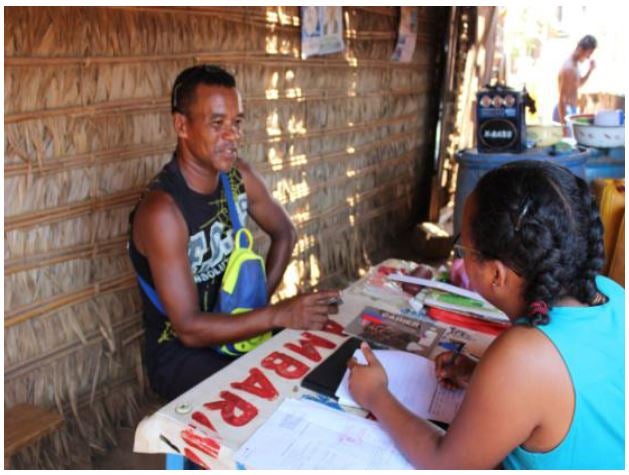 And, despite hurdles, people are finding a way to make it all work. If there’s no reliable electricity, entrepreneurs open small stores that offer solar charging. If coverage is spotty, people walk to where it is better, even long distances.  Almost half of those living near the new towers don’t have electricity at home. But they’ve worked out a system that allows them to get their phones recharged by neighbors with electricity, often in exchange for a small fee.

Most interesting, though, is that people say better connectivity has brought them together, not just with outside world, but with each other.  That cohesion has meant neighbors work with neighbors to get things done.   Even more striking is the tie between rural and urban.  Remittances from family members working in the city provide vital support for people in the countryside—now wage earners can send their money home via mobile banking, without paying large commissions to middlemen.

More tangible gains include an increase in household disposable income. People don’t have to spend on travel costs to get access to information. Trade is easier, banking is easier, people can call for advice in a health emergency.

We’ve seen, first-hand, what access can do. We believe information and communications technology is a key to sustainable growth and can have a strong impact on even the very poor.  We think it is essential that we keep working to bring such services to the poorest and most isolated populations.

Charles Hurpy is an ICT policy specialist, and Michele Noro is an operations analyst. Both are at the World Bank.
Topics
Digital Development
Madagascar
Africa