Through my work on the Uganda Agricultural Technology and Agribusiness Advisory (ATAAS), managed by Rasit Pertev, I have learned that Banana is a major staple in Uganda consumed by over 14 million people – the highest annual consumption of bananas in the world at about 0.7kg per person per day.

Earlier this year, my two ICT colleagues, Merrick Schaefer and Joshua Goldstein, identified a number of innovative ICT solutions that have been developed and implemented by UNICEF’s Technology for Development (T4D) team.  One of them is Ureport (www.ureport.ug), which is a network of 195,000+ volunteers across Uganda who use mobile technology to report on various issues that are of interest to UNICEF and other development partners.

March 26:  SMS to almost 190,000 Ureporters: “Do you know any farmers whose banana plantations or crops are infected with banana bacterial wilt disease? YES or NO.” 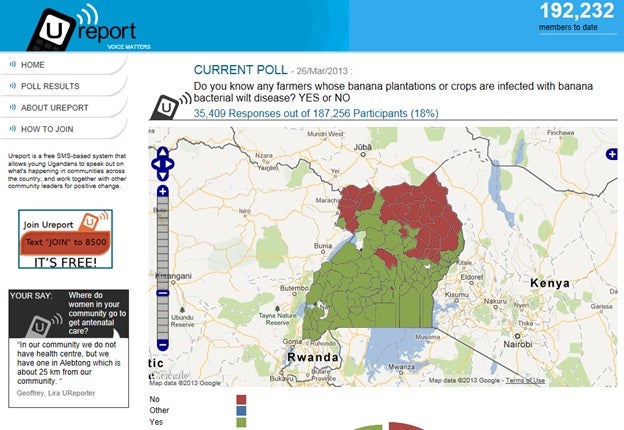 March 27:  SMS to all respondents, regardless of whether they answered YES or NO to the first poll:  “Banana Bacterial Wilt is a banana disease spread through insects and cutting tools that causes rotting of bunches and drying of male buds (mpumumpu).”

What Ureport made possible was not only information dissemination or data gathering, but a nationwide conversation focused on a critical issue for Ugandans.  It allowed us to take a real time snapshot of the situation, in the wake of the launch of Banana Bacterial Wilt Rapid Response Initiative.

All it took was the trust of a TTL, passion to save bananas to feed the kids, commitment to demonstrate the power of mobile, and ability to leverage existing innovation.  This is still a pilot, but I can’t contain my excitement about Ureport’s potential for other sectors in Uganda.  We are now discussing with education and urban development colleagues how we can leverage Ureport and other innovative solutions developed by UNICEF’s T4D to increase the impact of the World Bank operations in Uganda.

Luda on behalf of a joint ICT/Agriculture team Uganda could actually become a very successful company. I mean the country seems to me to have in abundance natural resources.