Unleashing the transformative power of the internet 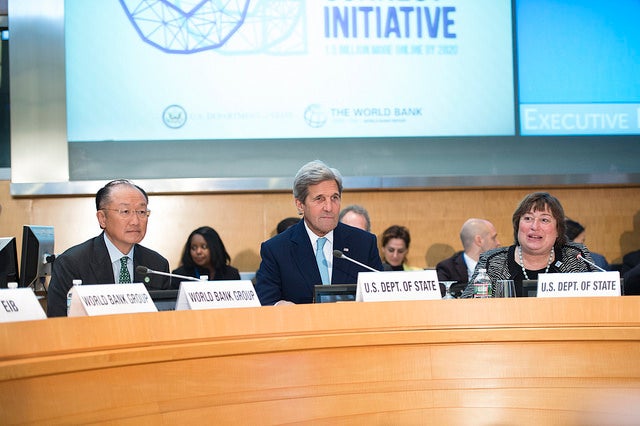 In the 1990s and early 2000s, the World Bank Group and other development partners actively promoted the mobile revolution, opening up telecommunication sectors that were largely monopolistic and state-owned.  The mobile phone, which was seen initially as a luxury good, became a key driver of growth and social inclusion in Africa, South Asia and throughout the world.

Today, access to the internet is quickly becoming a critical development tool. Without universal, affordable, open and safe internet access, developing countries and their people will not be able to fully participate in an increasingly data-driven and digitally-based economy.

We clearly need a similar deliberate, purposeful, and ambitious approach to unleash the potential of the internet and of the digital age in developing countries.  That was one of the main takeaways from a high-level meeting convened under the auspices of the U.S. State Department's Global Connect Initiative, and held in the context of the World Bank-IMF Spring Meetings.

The challenges ahead, however, are huge. More than 4 billion people still lack access to the internet, with 90 percent of them in developing countries. And while more than 75 percent of people around the world now have access to a cell phone, access to the internet - either through mobile or fixed broadband - remains prohibitively expensive in countries where lack of ICT infrastructure and regulatory bottlenecks still hamper broadband development.

The World Bank Group is working in over 50 countries at present to help tackle some of these challenges, by focusing on two main areas:

We are expanding digital connectivity by advising governments on the policy and regulatory frameworks that will enable competition and foster private investment in broadband. This includes support to public-private partnerships and innovative business models to roll out international fiber linkages, fiber backbones, internet exchange points, and last mile connectivity, particularly in rural areas.

In West Africa, for example, we have helped connect seven countries to ACE, the Africa Coast to Europe submarine fiber optic cable. As a result, the wholesale price of internet access has dropped tenfold in The Gambia and by 80% in Guinea, 75% in Liberia, 52% in Benin, allowing more schools, households, and SMEs to connect to better quality internet. In Sierra Leone, however, state-owned monopolies limited the drop in prices to 25%, leaving the cost for an international E1 link 12 times higher than in The Gambia by 2015; in anticipation of the liberalization of the international gateway in April 2016, international capacity dropped to price levels at par with The Gambia.  With further pressures of competition from regional operators and a capacity expansion of the ACE submarine cable, prices are expected to drop by another 50% by end of the year.

We are also supporting the development of digital platforms and solutions to improve government service delivery.  In Moldova, for example, the World Bank and its partners have supported an ambitious agenda that aims to transform the delivery of public services using ICTs, including the use of a cloud computing architecture to provide shared services within government, and the launch of online e-services that have improved citizen-government interactions.

Addressing the connectivity gap in developing countries requires significant capital, particularly for rural broadband. According to the ITU, it would cost around US$450 billion to bring an extra 1.5 billion people online by the year 2020.  The private sector can take care of much of these financing needs, but only if countries adopt the right policy and regulatory environment.

Ministers of finance have a key role to play in expanding connectivity. They can support much needed reform to make the ICT sector more competitive in the context of converging telecom, IT and media industries. They can help create an environment that fosters private investment, lowers investment costs by supporting shared infrastructure, and avoids overtaxing the sector. They can help repurpose universal service funds to expand access to broadband, and can use their financing power to shape more streamlined and integrated e-government platforms and solutions across government agencies and public sector institutions.

Ministers of finance can also give greater priority to projects that foster investment in ICT and internet access in their partnership strategies with the World Bank and other development partners.

Finally, both public and private development partners are invited to join the Digital Development Partnership (DDP), a multi-donor trust fund that provides advisory and analytical support to developing countries on their journey towards the digital dividends.

As World Bank President Jim Kim noted at the GCI event at the World Bank last week “two things we know for sure will be needed: connectivity for everyone and also the ability of people to engage in that new digital world."